The unexpected death of Supreme Court Justice Ruth Bader Ginsburg and the sudden potential for a third Trump appointee on the nation’s highest court have revealed much about the Democratic Party’s predicament. Insofar as it lacks procedural tools to prevent such a constitutionally proper outcome (thanks, Harry Reid), the party and its allies on the activist left are reduced to issuing threats.

Fill this vacancy, they warn, and you won’t like what comes next: the curtailment of minority rights in the Senate, a rubber-stamp high court packed with hand-picked liberal justices, and even violence in American cities. And yet, discerning observers might not find these foreboding scenarios so intimidating. These ultimatums were all on the table well before Justice Ginsburg passed on, and they would loom menacingly large even if she was still with us.

“If they even TRY to replace RBG,” former CNN host Reza Aslan wrote, “we burn the entire f***ing thing down.” In this fit of pique, Aslan was not alone. “We’re shutting this country down if Trump and McConnell try to ram through an appointment before the election,” wrote screenwriter Beau Willimon. “If McConnell jams someone through, which he will,” journalist Laura Bassett warned, “there will be riots.” But who will do the rioting? “I WILL RIOT,” raged NASA-affiliated scientist Jessie Christiansen. This vague sedition was crystallized into something more unambiguously insurrectionary by University of Waterloo professor Emmett Macfarlane: “Burn Congress 51down before letting Trump try to appoint anyone to SCOTUS.”

As nervous breakdowns go, this was a clarifying eruption. Democrats and the left have recently maintained that the episodes of looting, rioting, and violence in America’s cities, which have been ongoing since early May, are a spontaneous reaction to Donald Trump’s governance. Suddenly, these mobs are not inchoate anarchists but a constituency that can be bridled, weaponized, and pointed at a defined set of targets.

Whether that’s true or not, this bullying is not particularly persuasive. For millions of Americans, a state of affairs typified by “shutting this country down” and punctuated by sporadic “riots” describes the status quo. Those circumstances have nothing to do with a revolutionary mob’s desire to see certain legal outcomes emerge from the Supreme Court. This threat serves only as an admission against interest, confirming for all who needed proof that a certain type of activist sees the ungovernable hordes in American city streets as their kind of people.

A marginally more prudential set of Democrats has chosen instead to hold a gun to the head of America’s institutions. Senate Democrats are not ruling out the option to respond to the confirmation of a new Supreme Court justice by “packing” the Court with several new liberal justices at the next available opportunity. House Democrats, including Rep. Joe Kennedy III and House Judiciary Chairman Jerry Nadler, have been more direct with their threats to “expand the Supreme Court” in response to a new justice.

This, too, isn’t especially compelling. The last time the activist left convinced itself of the need to overturn the balance in the Court that has stood for over 150 years was only the last time this president had the opportunity to confirm a justice to its bench. Then, both the far-left and more mainstream media venues exhumed this parlous idea from it’s New Deal-era grave. When the prospect is discussed in more academic venues (as it so often is), its efficacy is in doubt. Acting on such a destabilizing threat requires Democratic control of all the levers of power in Washington, and such a drastic action would only sap political capital away from the pursuit of legislative victories. Nevertheless, though it has found its way into some influential mouths, this is hardly a new threat.

Other Democrats have sought to expand the terms of engagement to include not just dramatic reforms that would dilute the balance of powers at the highest levels of government but also assaults on more quotidian aspects of governance. Not only should Democrats respond to an effort to install a new justice on the Supreme Court by expanding it, Congress “must abolish the filibuster,” wrote Sen. Ed Markey. If ever there was a solution in search of a problem, it’s this.

Markey is only one member of the minority party in the Senate who has long favored the elimination of this particular minority privilege. Last year, he was joined by Sen. Jeff Merkley, who declared it “unacceptable” to campaign on a set of issues and then allow “powerful special interests to block those efforts.” These more ideological senators have found potential allies closer to the center of the political spectrum in Sens. Chris Coons and Joe Manchin. Though eliminating the filibuster would remove “what’s left of the structural guardrails,” Coons conceded, “urgent and effective action” is needed. “I’m interested in listening to anything because the place isn’t working,” Manchin agreed. Even Joe Biden was open to the idea of stripping Republicans in the minority of their privileges. “It’s going to depend on how obstreperous they become,” he warned.

These intimidation tactics and threats aren’t toothless, per se, but neither are they especially convincing. Thanks in part to their hostility toward the conventions that preserve the rights of minority political factions, Democrats find themselves forced to take the national civic compact hostage. The Democratic charge that Republicans are engaging in naked hypocrisy by installing a new justice in an election year is more grounded. Of course, as Democrats who recently appealed to what Barack Obama called a “Jim Crow relic” to block GOP-initiated policing reforms and pandemic-related economic relief might confess, hypocrisy is no obstacle in politics. Nevertheless, attacking Republicans on these grounds might have the compelling power of moral suasion. But Democrats seem to prefer blackmail. 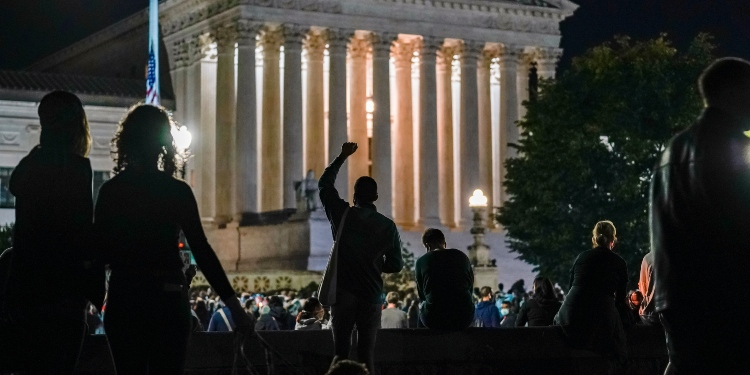