The mainstream press just cannot get the job done for Democrats anymore. They focus on “a relatively homogenous segment of white educated people in urban areas,” McGowan notes. Local news is dead or dying and cannot fill the void. “Misinformation,” she claims, “runs rampant” and is “condoned” by social media platforms. The antidote—one for which she’s raised tens of millions of dollars—is to fight fire with fire. If Republicans are going to benefit from a media environment characterized by propagandistic disinformation, Democrats must adopt those same tactics.

Toward that end, McGowan is building a national network of local media outlets designed to look and feel like objective newsgathering organizations but which are designed to disseminate information and narratives favorable to Democrats. As Bloomberg Businessweek reporter Joshua Green notes in his profile of the operation, casual readers of “Courier Newsroom” publications will find no cues that might alert them to the fact that these “aren’t actually traditional hometown newspapers but political instruments designed to get them to vote for Democrats.” That is the whole point of this enterprise, and it has attracted the support of Democratic donors and prominent political professionals, including Barack Obama’s 2008 campaign manager, David Plouffe.

According to Green, the proprietor of Courier Newsroom insists there will be a “firewall” between this conglomeration of media outlets and the nonprofit Democratic strategy group that operates them, ensuring “editorial independence.” But if that policy were strictly adhered to, it would defeat the project’s stated purpose. “[W]e’re losing the information war to verified liars pouring millions of dollars into Facebook,” McGowan insists. If you consider news gathering and analysis a “war,” then the media outlets that engage in that pursuit are combatants. And what commander would tolerate “independence” amid such an existential conflict?

The philosophy that informs this project should be familiar to conservatives. It is based on an overly broad and often self-pitying assumption about how media operates. Conservatives correctly note that news and political media professionals lean left, but they make a mistake when they attribute this condition to a conspiracy rather than the similar backgrounds and shared cultural affinities of the people who gravitate toward newsrooms. Likewise, an activist Democrat might assume that the popularity of conservative narratives on social media platforms like Facebook couldn’t possibly be attributable to their resonance. It must be some grand intrigue. And how else could such a nefarious plot be countered but with another nefarious plot?

McGowan’s objective—the creation of a synthetic media outlet designed to publicize a partisan narrative—is a self-serving caricature of the media landscape that exposes deep and unproductive insecurities. As Gallup has shown over the course of nearly 50 years of polling, the public’s trust in mass media as an institution began to decline precipitously only in the 1990s. This decline coincided with the proliferation of media outlets, but it is not universal. Older Americans and Democrats are far more likely to trust what they read and watch. Pew has similarly confirmed that Democrats are less discerning news consumers than their Republican counterparts. McGowan seems less inclined to counter this condition than to capitalize on it.

But why are Democrats more trusting of the press? Gallup answers with no ambiguity: “Democrats may see the media as the institution primarily checking the president’s power.” Indeed, it’s hard to avoid the conclusion that, in the Trump era, the press has recommitted to its mission statement (while carefully avoiding retrospectives that shine a light on its failure to speak truth to power over Obama’s eight years).

Perhaps the most damning line in Green’s generally disturbing profile of the Democrats’ alternative news project exemplifies the left’s problem: “McGowan—a former journalist herself, who worked at 60 Minutes and CBS News—says she sees Courier Newsroom as a continuation of that work.” Indeed. Republicans do, too. 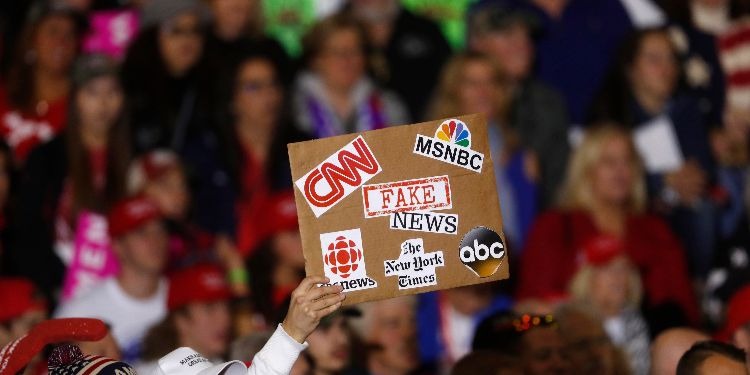