On Wednesday night, a new Democratic foreign-policy consensus came together on the debate stage. For Democrats, it has become dogma that Saudi Arabia deserves only to be shamed and isolated by the United States, not treated like a valuable strategic partner.

Sen. Cory Booker accused the president of committing a “human-rights violation” by supporting the Saudi war against Iran-backed militias in Yemen without congressional consent. Former Vice President Joe Biden called the Saudi Kingdom a “pariah” and said its government has “very little social redeeming value.” Sen. Bernie Sanders accused the Saudis of operating a “brutal dictatorship” and being an unreliable U.S. ally.

These criticisms are not unfounded. The Saudis were implicated in the murder of a U.S. resident. The Saudis do commit human-rights violations, both in domestic and foreign policy. The Saudis have encouraged the radicalization of their citizens and contributed to geopolitical insecurity in the age of Islamist terror. Democrats are not unjustified in their criticisms of the Kingdom, but it takes a special brazenness to issue these attacks on the Saudis while simultaneously calling for the banning of the technology that has made such displays of American geopolitical independence possible: fracking.

To his credit, Joe Biden has not called for the outright ban of hydraulic fracturing technology, but Sanders and Booker have. That policy, if realized, would relegate the United States to a strategically disadvantageous role vis-à-vis the world’s largest energy exporters, including Saudi Arabia. It would also sacrifice one of the most miraculous developments of this decade: the revival of the American domestic energy industry.

Since 2013, domestic U.S. oil production has increased by 60 percent. In 2018, for the first time in 40 years, the United States outpaced Saudi Arabia’s oil output and is estimated to have surpassed Russian production. American energy companies have become major exporters of crude oil and natural gas, and the U.S. is poised to become a net energy exporter for the first time since 1953 by the year 2022. This new glut of supply in the fossil-fuel market has substantially reduced the geopolitical clout of OPEC countries, including outcast nations like Nicolas Maduro’s Venezuela and Vladimir Putin’s Russia. That has enabled the U.S. to pursue precisely the kind of values-based foreign policy Democrats advocate.

It’s no exaggeration to stress that this is among Putin’s worst nightmares. He’s confessed as much, in fact, according to former National Security Council official and Russia expert, Fiona Hill. In testimony before congressional investigators this week, Hill noted that Putin himself warned of the threat to Russian interests represented by fracking as early as 2011. The Russian president was among the first petrol-fueled despots who felt the sting of the American energy sector’s technological revolution. In November 2013, just weeks before his ouster in the Maidan revolution, the Russia-friendly president of Ukraine, Viktor Yanukovych, signed a $10 billion deal with the U.S.-based multinational Chevron to explore and exploit the country’s domestic shale gas deposits.

Leveraging Russian gas exports to Europe and the former Soviet Republics is a means by which Moscow has advanced its interests on the Continent. Breaking its hold on energy exports is in both America’s commercial and geostrategic interests. There is no player on the international stage that Democrats would like to see marginalized more than Putin, and fracking creates more opportunities to achieve that objective. But Democrats would rather pander to the party’s environmentalist wing and its irrational hostility toward this successful innovation.

Democrats can adopt as hawkish a posture toward Russia and Saudi Arabia as they like, but isolating these illiberal states is possible today only because of the domestic energy revolution they oppose. Democrats can have fracking and the marginalization of Putin and the House of Saud, or they can have neither. So far, they’re opting for neither. 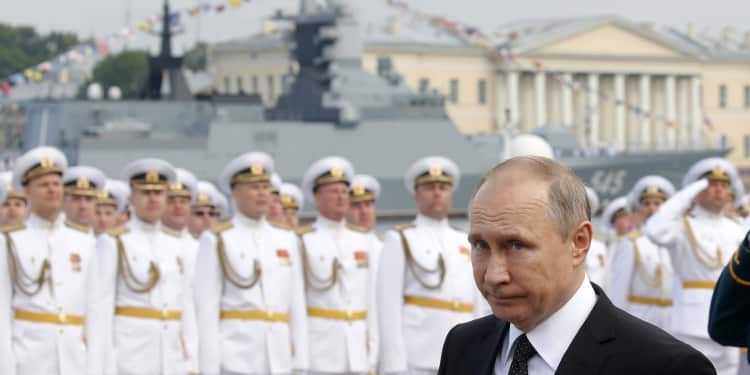