To conservative opponents of the gentry leftism that often seems blind to the impact that their market-distorting policies and regressive tax schemes have on average people, there is a lot to like about France’s “gilets jaunes” (Yellow Vests). Their movement was spontaneous and organic. It was composed early on of rural, middle-class professionals who simply could not afford French President Emmanuel Macron’s “green tax” on fuel. The wave of protests ignited by Macron’s “de-carbonization” plan exposed precisely how shallow public support for green initiatives is when the costs are no longer hypothetical. American conservatives might be tempted to sing this movement’s praises, but that would be ill-considered.

The Yellow Vests are many things, but they are not anti-tax. They’re certainly not for the kind of smaller government championed by Macron’s government. Following the announcement that the Yellow Vests had forced the French president to suspend the implementation of his gas tax for six months, Yellow Vest spokesmen Benjamin Cauchy sounded a note of defiance. “Our demands are much bigger than this moratorium,” he said. “We want a better distribution of wealth, salary increases.” Indeed, one of the Yellow Vests’ central grievances is one of Macron’s first acts as president: a substantial reduction of the tax burden on France’s high earners. Among the “people’s directives” the Yellow Vests endorsed are an increase in the minimum wage, a “maximum wage” that caps income at €15,000 per month, the repeal of tax credits for employers, rent controls, dramatic increases in public spending on schools, post offices, and railroads, a ban on outsourcing, and a lower retirement age.

Most of the hundreds of thousands who turned out to protest Macron’s green initiatives were peaceful, but those who weren’t were terrifyingly violent. Over the last two weeks, Paris experienced the worst street violence and rioting since 1968. Protesters torched over 100 hundreds of cars, set historic buildings on fire, looted stores, and assaulted police, who were forced to deploy tear gas and water cannons against the rioters. They built barricades in the streets, vandalized monuments, blocked access to fuel depots and petrol stations, and fought running battles both with police and the French gendarmes. At least 133 people were injured in the violence. Four died. And as of Monday, over 400 were arrested.

The first real crisis of this beau monde, center-left presidency may seem a welcome development for anyone eager to see the aloof and Olympian Macron brought back down to earth. But being humbled into governing as a populist means something very different in France than it does in the United States, and it would yield policy that few American conservatives would welcome. What’s more, it does not follow that the spoils of this fight will accrue to a responsible center-right party. The responsible center-right in France is nowhere to be found.

This unrest is only likely to strengthen Marine Le Pen’s nationalist right. Her party has polled closely with Macron’s party ahead of European parliamentary elections in May 2019, and they are working feverishly to co-opt the Yellow Vests. Le Pen has even been accused of inciting her followers to violence. Her party’s vision for France—which is hostile to open markets, immigration, and continental integration and favorable toward protectionism, an entitlement state for native-born French, and historical revisionism of the Vichy collaborationist period—could hardly be called “conservative” in the Reaganite sense.

The great political divide in Europe today is not between right and left but populist-nationalists and technocrats. And while there is plenty to criticize about the arrogant elites, whose theological commitment to combating greenhouse gas emissions blinds them to the potential backlash among those for whom the cost of living is already prohibitive, that does not render their populist opponents desirable.

Macron has positioned his government as the antithesis of Italy’s anti-elitist Five Star government, which won the largest ballot share in May behind a platform of euro-skepticism, anti-immigrant sentiment, and radical environmental reforms like the elimination of all fossil fuels. This week, Italy’s vaccine-skeptic health minister dismissed the entire board of government advisors on health policy. He plans on replacing the 30 technical and scientific experts with “other deserving personalities,” who critics believe will share his superstitions. When it’s not imperiling Italy’s credit rating by engaging in deficit-busting government spending designed to stimulate the moribund Italian economy (and reward popular constituents), the Five Star government is apparently flirting with the prospect of an avoidable public health crisis. It’s enough to make the French technocrats appear prudent.

The American right can take some pleasure in the bloody nose the Yellow Vests gave Macron and the heedless consumption taxes his government champions, but not too much. Conservatives do not have a dog in this hunt. They fete this socialistic and sporadically violent movement at the cost of their own intellectual coherence. 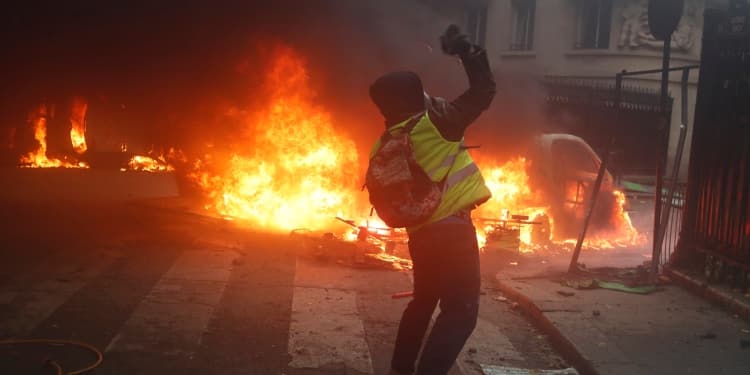