In the decision to transform from neutral political vehicle into a gilded carriage that would deliver Hillary Clinton to her coronation as presidential heir, the Democratic Party has brought quite a bit of deserved criticism down upon itself. Among the most overt effort by the party to shield Clinton from the voters’ scrutiny was the bizarre schedule to which the 2016 debates were consigned. Saturday nights, the weekend before the Christmas holidays, opposite the NFL playoffs; you could be forgiven for thinking the Democratic Party wanted to make sure their intramural contests were as inconspicuous as possible. There is, however, something to be said for the party’s low-impact approach to the 2016 debate schedule. The town hall format, while low stakes for candidates, also provides viewers with a radically different view of the individual presidential aspirants than that which is exposed by the traditional debate format.

Make no mistake; voters are far better served by debates than they are by sleepy town hall-style exchanges with awed and deferential audiences. A contentious interchange between candidates and members of the press is more likely to induce stress, grind off even the most polished candidate’s veneer, and provide voters a window into the office seeker’s thought process under pressure. The debate format is also far more dramatic than the town hall. What is sacrificed in substance, given that candidates are allotted maybe 60 seconds to formulate a cogent and comprehensive answer to complex policy matters – a debate recoups in the form of conflict. Conflict makes for good television, and that generates ratings. Ratings result in publicity, increased interest in the process, and, ultimately, a nominee with high name recognition. In theory, the process results in a nominee who has been run through the gauntlet and emerged refined, tested, and better prepared for the general election.

The town hall format, meanwhile, does have its advantages. Given the size of the GOP field this year, town halls were likely unfeasible. Find me a voter, much less a cable network, willing to sacrifice six consecutive hours to a 15-member pageant of presidential hopefuls. That might be why the Republican National Committee did not pursue an opportunity for a candidates’ town hall when they had the chance. While it would have lacked the fireworks to which political observers have become accustomed this cycle, imagine how the dynamics of the GOP campaign would have been altered had the party embraced one or two town halls. Would Donald Trump have acquired the stature he presently enjoys if he was denied foils Jeb Bush or Rand Paul to berate on the debate stage from his position of strength in the polls? Would Chris Christie, preternaturally gifted as he is in settings that demand spontaneity, have spoken his way to a better position in the field? In a setting in which thoughtfulness is rewarded over zings and jabs, and in which the questioners are usually concerned citizens and not members of the political elite, the highlight reel would suffer but the voters might not.

The theory that the town hall format rewards the thoughtful was lent some credence at one of the Democratic Party’s typically low-impact engagements on Wednesday night. There, Democratic New Hampshire state Representative Marjorie Smith did the nation a service when she asked what might have been the best question of any debate of the 2016 election cycle. Addressing Senator Bernie Sanders, Smith observed that it is highly unlikely that he (or Clinton, for that matter) will as president have the luxury of working with a legislature that is majority Democratic. “How are you going to be able to work with a Congress that might not share our deeply held goals in order to achieve a more perfect union?” she asked.

That might seem a simplistic premise, but almost none of the presidential candidates on either side of the aisle have been asked how they plan to work cooperatively with a co-equal branch of government in order to pass legislation. It is revelatory of the lamentable erosion of our constitutional framework that the candidates are so often asked how they alone would enact reforms. Or, for that matter, whether their personal beliefs inform their approach to governance as if a president alone passes legislation. Even if the answer Smith received was less than satisfactory, it was refreshing to see a prospective presidential candidate have to contend with the immutable dynamics of the constitutional framework, which they would be forced to confront if they were elected.

There is plenty to be said for drama. It’s fun. It gets voters excited. It attracts eyeballs, sells advertising dollars, and creates a stake for media outlets in the outcome of a campaign. Still, the GOP could do with a little less drama and a bit more substance, particularly as we enter into the home stretch of the primary race. Maybe it’s a waste of intellectual effort, but one has to wonder what might have been had the nominating process focused less on the sideshow and more on the substance. 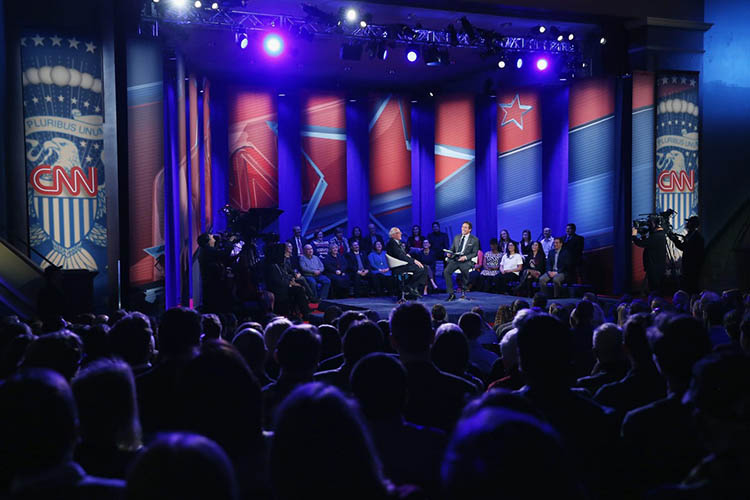