Among the loud and partisan, Donald Trump’s relationship with Russia is uncomplicated. To his most ardent detractors, the president is Vladimir Putin’s cat’s-paw, always willing to subordinate whatever allegiance he has to the United States to the demands of his handlers in Moscow. Within #MAGA media, however, Trump’s relationship with Russia is a conventional one for a Republican president—diplomatically conciliatory but predicated on strength. Any suggestion to the contrary is a conspiracy theory; a “hoax,” in the president’s preferred parlance.

The political activist class does not allow for a more nuanced accounting of Trump’s approach to bilateral relations with Russia. Nor do they draw the necessary distinctions between the president’s attitude toward Moscow and how his administration deals with the Kremlin.

Any honest political observer should by now concede is that this White House’s Moscow policy is wildly inconsistent. Donald Trump, the man, remains as obsequious as ever toward Putin. Trump has repeatedly demonstrated his willingness to seek rapprochement with Putin, praises the Russian strongman in the most servile manner, and claims the Kremlin is more reputable than America’s own intelligence officials. But at the same time, the Trump administration has staked out an admirably hawkish record on Russia.

The White House imposed new sanctions on Russian entities and Putin loyalists well before Congress got around to taking action. It seized Russian diplomatic property and expelled Russian diplomats from U.S. soil. It’s expanded NATO, approved the sale of Patriot anti-missile systems and liquid natural gas to Poland, and sold long-delayed offensive arms to Ukraine. Just this week, a New York Times dispatch revealed that the U.S. now has the capacity to disable critical civilian infrastructure in the event of a conflict with Russia.

This is welcome news. It indicates that this administration is taking the threat of Russian election interference in 2020 seriously. It suggests the U.S. has achieved parity, if not superiority, with Russia in the cyber arena. Finally, it communicates a more credible deterrent than escalating diplomatic sanctions or kinetic action against Russian targets—the former they can endure and the latter they wouldn’t believe.

For all the Democratic complaints about Trump’s pro-Putin toadying, this administration has been measurably tougher on Russia than its predecessor. All this raises a question: Given his propensity for bravado, Trump’s conspicuous silence about his administration’s tough stance toward Russia makes you wonder whether the president is aware of that record in the first place. The latest Times report solves part of this mystery for us: The answer, in this case, is maybe not.

According to the officials who spoke with the Times, it’s possible the president has not even been briefed about the intensifying efforts by the Defense Department to deter Russian aggression in cyberspace. That compartmentalization is due, in part, to a lack of legal necessity (Congress and the White House gave the Pentagon broad latitude to define the terms of engagement when it comes to cyber warfare), but also the Defense Department just doesn’t trust the president.

“Pentagon and intelligence officials described broad hesitation to go into detail with Mr. Trump about operations against Russia for concern over his reaction—and the possibility that he might countermand it or discuss it with foreign officials, as he did in 2017 when he mentioned a sensitive operation in Syria to the Russian foreign minister,” the report read.

Even if you’re not inclined to defer to Donald Trump’s judgment, the revelation that the Pentagon isn’t comfortable briefing the commander-in-chief on its aggressive efforts to deter a competitor is disturbing. A relatively new theater of war, cyberspace is not governed by the rules of conventional warfare. It is a hot theater, with state and non-state actors constantly probing one another’s defenses with carefully calibrated attacks. The potential for miscalculation is substantial. The chance for hostilities in cyberspace to spill out into the real world, necessitating a political or even conventional military response, is very real.

A political event that triggers an attack on a civilian electrical grid is hardly an outlandish prospect. Several former Soviet Republics have already accused Russia of doing just that. A crippling attack that disables electrical transformers and substations for a prolonged period carries dramatic risk. Without the capacity to refrigerate food, access potable water, engage in commerce, or take advantage of climate-control technology, many could quickly face mortal jeopardy. The Pentagon isn’t responsible for evaluating the profound moral and political consequences if an effort to deter Russia devolves into a series of escalating retaliatory measures, so it should not be the institution that inaugurates such hostilities. The president is the only member of the Executive Branch who is directly responsible to voters, and only the president can properly weigh the consequences of such actions.

In the age of instantaneous engagement, it’s reasonable for both Congress and the White House to cede some authority to the Pentagon to respond with as much alacrity as possible in defense of American interests in the digital space. But when civilian population centers are hostage, the line between defensive and offensive operations is blurred. Only the president can make that call. Trump may not have wanted all the responsibilities associated with the presidency, but they are Trump’s alone. 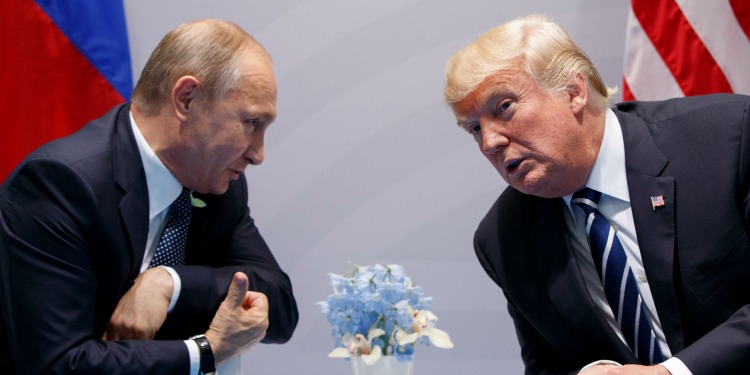