Hillary Clinton has been an extraordinarily fortunate presidential candidate. The missteps of her political opponents have allowed her to run for Barack Obama’s third term largely without having to account for his failures. And they are legion. The Affordable Care Act is imploding. The economy is growing at an unsustainably languid pace. Race relations are far worse than they were when the president took office. Obama’s executive orders on gun ownership and immigration expand the bounds of executive authority and, on top of being unpopular, are of dubious constitutionality. Perhaps most critically, however, is the collapse of Obama’s foreign policy before our eyes. It is a policy that Clinton is directly responsible for crafting and implementing. She should not escape culpability for her role in the slow motion disasters unfolding abroad.

In Hillary Clinton’s speech on Thursday indicting Donald Trump for rehabilitating white nationalism, she accurately noted thatRussian-linked outlets actively promote this ideology. “The godfather of this global brand of extreme nationalism is Russian President Vladimir Putin,” Clinton said of the kind of racially conscious cultural revanchism preached by Trump supporters. She added that Trump has endorsed “pro-Russian policies,” which is also true. Clinton glossed over a rather critical aspect of her days as Obama’s secretary of state, however, when her boss shared quite a few Russian priorities.

When Obama entered the White House, his administration had two foreign policy-related goals. The first was to rehabilitate the Iranian regime and to shift the burden of regional stability onto a power-sharing dynamic between the Middle East’s Sunni and Shiite power centers. The second was to use whatever means were necessary to cajole or coerce the globe’s major powers into sharing that goal. The “Russian reset” was the first phase of that strategy.

Before Russia was invading and annexing territory in Europe, destroying civilian airliners, intervening in Syria, sending warplanes to get shot down over NATO airspace, and routinely harassing American naval and air assets, they had their strategic priorities seen to by the Obama administration. Among those was Moscow’s longstanding demand to see missile interceptor and radar installations slated for construction in Poland and the Czech Republic scrapped. Clinton sold this concession as nothing more than an upgrade to dated defense systems designed to thwart rogue missile attacks from states like Iran. It was, in fact, Russia’s Soviet-era objection to any form of boost-phase missile defense system in Europe that was the sensibility to which the White House was catering. These and other concessions to Russia were made in service to one objective: securing Moscow’s support for the Iran nuclear deal.

When a Tunisian fruit vendor set himself alight in order to protest conditions in his part of the Muslim world, sending the region’s Sunni states into fits of political turmoil, the administration’s strategy for filling the vacuum they left in the Middle East was suddenly threatened existentially. It was a fateful decision for Barack Obama to reluctantly back the protesters in Cairo’s Tahrir Square and to support the ouster of long-time Egyptian dictator and U.S. ally Hosni Mubarak. That represented a remarkable departure from the Obama administration’s silence when Green Revolutionaries took to the streets in Iran in 2009, only to be crushed by Mahmoud Ahmadinejad’s Basij militia.

In her 2014 book Hard Choices, Clinton contended that she warned the president that decades of chaos could soon follow his choice. The chain of events the Arab Spring set in motion, a flowering of revolutions that were largely supported by the White House, is clearly one that Clinton wishes to distance herself from. Why, then, has she presented herself as the heir to Barack Obama’s legacy on all matters foreign and domestic? Why has she not been pressed harder as to why she stayed on at State even after Barack Obama so badly damaged American credibility in places like Syria?

In January 2011, the United States posted an ambassador to Syria for the first time since diplomatic relations were broken off in 2005 at the height of the insurgency in Iraq, which was backed by both Assad and his benefactors in Tehran. Less than six months later, Barack Obama demanded that Bashar al-Assad step aside as protests in Syria evolved into a civil war. Clinton echoed that call in the announcement of new sanctions on Damascus; it was a demand from an American president that went ignored.

In a bizarre appearance on CBS’s “Face the Nation” in March of 2011, when just 20 of the 500,000 who would die in this conflict had been killed, Clinton insisted that the situation in Syria was nothing like what had occurred in Libya. There, the civil conflict was so dire that it necessitated American intervention. Again, the administration’s objective was to do nothing that would upset negotiations with Iran aimed at normalizing Tehran’s relations with the West. When Barack Obama walked away from his red line for action, which was drawn in the wake of one of many chemical attacks on civilians, Clinton did nothing. She continues to dodge questions regarding her refusal to react forcefully to such a reckless waste of American diplomatic and political capital.

Today, nearly one year after the U.S. Senate reluctantly ratified the president’s accord with Iran, American soldiers are subject to harassment and capture by Iranian forces. American civilians are kept hostage by the mullahs, who are rewarded for their efforts by the administration. U.S. Navy assets in the Persian Gulf are routinely harassed, occasionally necessitating literal shots across the bow of Iranian vessels. These are the fruits of the Obama administration’s singular obsession with Iran.

Clinton has tried to have it both ways when it comes to Barack Obama’s foreign policy. She is at once critical of some of its most glaring failures while also presenting herself as vaguely supportive of most of it. She should not be allowed to get away with it. 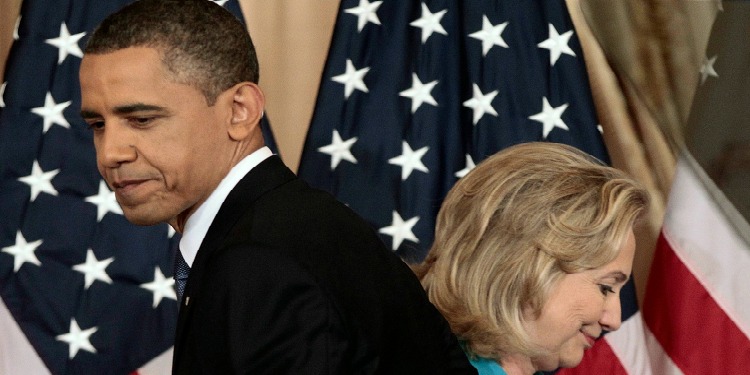