Hillary Clinton will be the first to admit that she has always been a victim.

She would have been remembered today as the mother of health care reform, but for the dastardly insurance companies and other stakeholders in the existing health care system who thwarted her efforts. Her husband might not have been remembered as the first president impeached by Congress since Andrew Johnson were it not for the tireless efforts of a “vast rightwing conspiracy.” If it weren’t for an upstart backbencher in the Senate, she would have been her party’s presidential nominee in 2008. When asked that year how she handled the adversity of a presidential bid, “as a woman,” Clinton’s humanity got the best of her. Now, as she makes another run for the White House, the unanticipated adversity she is facing has led some to claim that Clinton’s precarious electoral prospects could only be the result of an unexpected betrayal by the sisterhood.

If only this were the final treachery that Hillary Clinton has been forced to endure. It seems, however, that the former secretary of state has singled her out by the cruel fates. Even insentient products like her now infamous “homebrew” email server have apparently become aware and are set on tormenting the once and future White House resident.

Clinton revealed to the nation the existence of this private email server, on which she was compelled by the necessities of “convenience” to conduct state business, in March of last year. Since then, the server has dogged Clinton’s campaign. In the months that elapsed, the former secretary of state has been robbed of her prohibitive stature as the inevitable nominee and the likely presidential victor in November. Former Defense Secretary Robert Gates and former CIA Director Michael Morell both conceded that the server might have exposed classified information to foreign intelligence services, which would almost certainly compromise classified U.S. methods and assets abroad. It’s “nearly certain that Mrs. Clinton’s server was hacked,” wrote former Attorney General Michael Mukasey. If it was not abundantly clear before that this rogue server appears set upon scuttling Secretary Clinton’s perennial political ambitions, it should be by now. Fortunately for her, the political press isn’t falling for this ruse.

By the summer, it was clear that the investigation into this nefarious piece of hardware was about to progress to the next level. In August, when the FBI finally hauled away the scofflaw mainframe, law enforcement officials were quick to assure the press that Hillary Clinton “herself is not a target of the investigation,” as the New York Times reported. “There are several investigations into her conduct, not into her, but into her use of personal email and a personal server,” McClatchy reporter Anita Kumar, who initially broke the story revealing the FBI investigation, told MSNBC. The Department of Justice subsequently confirmed that Clinton’s server, not the former secretary, were the subject of investigative scrutiny.

The Times report detailed how the investigation into the server, which somehow found its way into Clinton’s possession and subsequent use for four years, was exclusively focused on “the path of classified email from State Dept. to Hillary Clinton.” It is and remains entirely possible that hundreds of emails were accomplices in this server’s effort to discredit the former first lady. Talk about a vast conspiracy.

Still, there were some (Republicans) who refused to end their incessant victim blaming. Take, for example, Jeb Bush who averred on the debate stage that Clinton was “under investigation with the FBI right now.” Fortunately, PolitiFact was on hand to correct this near slanderous assertion. “The FBI is conducting a general inquiry into the security of Clinton’s private email server,” the report noted. “[L]aw enforcement officials have said Clinton herself is not the target of the inquiry, and it is not a full-blown criminal investigation.” Even the White House has made it clear that Clinton’s server, not its owner or the behavior in which she engaged, are the target of an investigation. What’s more, the president’s press secretary got out in front of that investigation to note that Clinton would not be indicted based on what is publicly known about the facts of her server’s likely treasonous acts.

Today, however, it appears that even the FBI has decided to muddy the waters. In a public letter released on Monday in response to a September 2015 inquiry, the FBI revealed that their investigation was not in fact limited to a malevolent server. “…the Bureau has acknowledged generally that it is working on matters related to former Secretary Clinton’s use of a private e-mail server,”  read the letter from General Counsel James Baker. “The FBI has not, however, publicly acknowledged the specific focus, scope, or potential targets of any such proceedings.”

On the record, that’s true. Off the record and on condition of anonymity, FBI sources have made it abundantly clear that Clinton’s criminal liability is by no means off the table. “It’s definitely a criminal probe,” an FBI source told the New York Post in August. “I’m not sure why they’re not calling it a criminal probe… Maybe DOJ is trying to protect her campaign.” Or maybe server is trying to sabotage it!

This breaking news which dropped late Monday, the day before the crucial New Hampshire primary, might have been a serious problem for Clinton. Fortunately, the former first lady can still count on journalists to comport themselves professionally. In reporting on the breaking news regarding the FBI’s acknowledgment that their investigation is focusing on Hillary Clinton’s behavior and not merely her inanimate possessions, MSNBC reported: “BREAKING: FBI confirms investigation into @HillaryClinton’s emails.”

She’s going to be just fine. 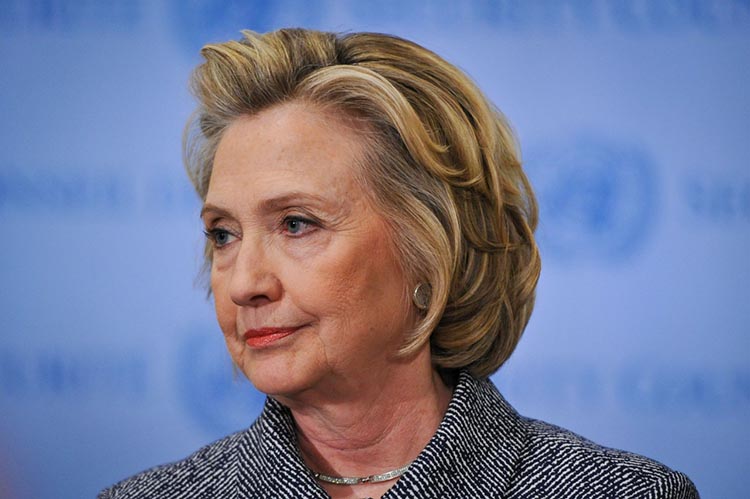