Democrats are fond of calling their Republican counterparts “extremists.” They’ve been deploying the charge since 2010 but, having lost control of the House, Senate, over 30 governorships, and 900 legislative seats in that period, they don’t seem inclined to revise this strategy. Rarely do Republicans reply in kind. When they do, it’s even rarer that the political press uncritically echoes the charge that Democrats have become too extreme for middle America. That is no boon for Democrats, though. The party that quite nearly chose a self-described socialist to lead it has lost all perspective. There may be no better example of that inclination than Hillary Clinton’s latest campaign promise—one that has been applauded by her fellow liberals: a constitutional amendment to restrict free speech.

That is the only way to characterize what Clinton has proposed, but it’s a description that is so self-evidently damning you’ll rarely see it in the press. “I will propose a constitutional amendment to overturn Citizens United,” Clinton pledged in a video her campaign released on Saturday. Clinton told progressive attendees of the annual “Netroots Nation” conference that, within one month of taking office, she planned to propose and advance an amendment that would re-impose the McCain-Feingold campaign finance restrictions, which were found unconstitutional by the Supreme Court in 2010.

Responsible political observers dismiss this plan as simple pandering to an activist base of the Democratic Party, but that gives pundits and the press license to decline to dissect this anti-democratic proposal and its appeal to millions of liberals. Clinton and her liberal supporters believe the First Amendment to the Constitution must be curtailed to eliminate protections on certain speech.

Vermont Senator Bernie Sanders has left many marks on the party he sought to transform with his insurgent presidential bid, but this might be his masterpiece. In September of 2014, Sanders introduced language into the Senate regarding a new constitutional amendment that would limit the protections in the First. In doing so, he revealed that liberal antipathy toward the 2010 Citizens United decision is built upon a foundation of misapprehensions. “Billionaires buying elections is not what our Constitution stands for,” Sanders insisted in a 2014 op-ed. In fact, “billionaires” have had a rough go of “buying elections” in 2016; the candidates with the most powerful “dark money” machine and well-heeled Super PACs did not perform well this cycle.

At least progressives like Senator Sanders have a legitimate (albeit pathological) fear of money in politics and their policy prescription is founded in altruism. Hillary Clinton, however, is the worst possible messenger for this crusade to re-impose restrictions on political speech. The case in Citizens United v. Federal Election Commission centered on whether the McCain-Feingold Act, which made airing media critical of a politician within 60 days of a general election or 30 days of a primary illegal, was constitutional. Specifically, the suit involved a complaint against a group for broadcasting an anti-Hillary Clinton film within 30 days of a Democratic primary contest in 2008, and that complaint was found to violate the First Amendment to the Constitution.

This is the most galling aspect of the former first lady’s proposal: it’s personal. Hillary Clinton doesn’t just want to make certain political speech illegal; she wants to make speech that is explicitly about her illegal.

Where are pundits and media personalities rending garments over both the threat to their freedoms and their industry? Who has condemned the grotesque impropriety of Hillary Clinton endorsing such a nakedly self-serving power grab? This behavior verges on indecency in its disregard for democratic norms, not to mention modesty and appropriateness. Because a new constitutional amendment may be unlikely doesn’t give political observers license to dismiss such a proposal as a stunt. Americans need to learn precisely what it is that Clinton is proposing and what it would mean.

Don’t hold your breath. The left and their allies in the political press are married to the theme of Republican extremism—a premise that has only been advanced by Donald Trump’s ascension to lead the party. From opposing abortion, to collective bargaining rights for public sector unions, to the Affordable Care Act; every Republican reform is dubbed “extremist” by a hysterical and manipulative set of prominent opinion-makers. Meanwhile, the Democratic Party’s plan to curtail the freedoms in the Bill of Rights so as to silence their opponents only merits a passing mention. Who’s the real extremist here? 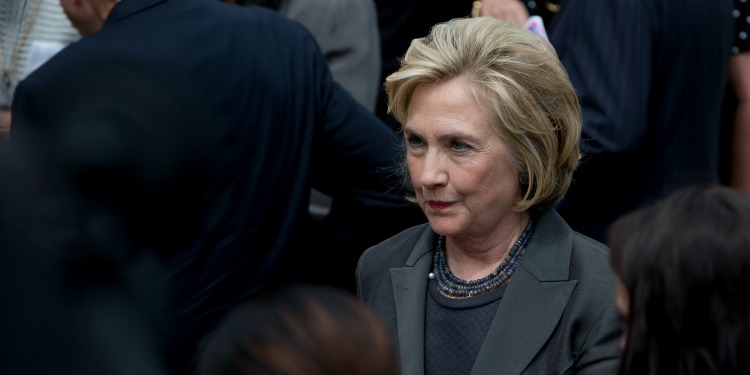