Hillary Clinton’s defenders do not lack for excuses. As the autopsies of the Clinton campaign are concluded, however, the Clinton guard has grown increasingly frantic in its efforts to blame-shift. For former Clinton campaign chairman John Podesta, “media” bear the brunt of the blame for losing 2,564 of America’s 3,141 counties. “The media always covered her as the person who would be president and therefore tried to eviscerate her before the election,” Podesta said of his candidate, “but covered Trump who was someone who was entertaining and sort of gave him a pass.”

According to outgoing Democratic Senate Minority Leader Harry Reid, it was FBI Director James Comey who cost Clinton the election. “Had he not written that letter a week or so before the election, she would have won,” Reid said. “That letter,” of course, refers to a dispatch informing Congress that the FBI had new information indicating the possibility Clinton’s secret server might have been compromised.

Liberal blogs tell us that America’s latent prejudices were responsible for the Democratic Party’s defenestration at virtually all levels of government. “Some form of conscious or unconscious sexism must have played some role in why she was seen as the less trustworthy candidate when practically every word out of her opponent’s mouth was a lie,” opined The Daily Beast’s Jonathan Alter.

Clinton allies have blamed her loss on Russian intervention in the American election, third party candidates, “voter suppression,” Bill Clinton, and, most recently, a typo in an internal campaign email. All of these explanations are unsatisfying because they are insufficient. None of them fully explains why Clinton so undershot her polling in places like Wisconsin, Pennsylvania, and Michigan. A Politico exposé examining the Clinton campaign’s strategic failures in Michigan goes a long way toward explaining what really went so wrong.

The piece demonstrates how the Clinton campaign overthought its strategy. They refused to allow union organizers to campaign in Michigan, preferring instead to keep them parked in Iowa to “fool” the Trump campaign into thinking the Hawkeye State was competitive. In so doing, Clinton’s campaign team ignored desperate pleas for support from Michigan organizers who knew Clinton support in their state was softer than Democratic models suggested.

The story details how Clinton supporters appeared at local offices asking to help canvas for the Democrat or put up yard signs, only to be rebuffed. Door-knockers were not provided with standard devices to log their interactions with voters. Portfolios indicating rising support for Trump among white male union members were discarded. DNC funds marked for late-stage advertising purchases to shore up the urban minority vote were “dumped” in cities like Chicago and New Orleans where they would have no effect on the electoral outcome.

“It was arrogance,” a “battleground state operative” told the Huffington Post’s Sam Stein, “arrogance that they were going to win. That this was all wrapped up.” The Clinton campaign was similarly dismissive of the cries for assistance coming from their allies in Wisconsin (a state she declined to visit even once in the campaign). Clinton’s Brooklyn-based headquarters reportedly balked at a request for $1 million to fund a get-out-the-vote effort, arguing that local labor organizations had the state covered. Another operative told Stein that Pennsylvania was similarly mismanaged, not because the Clinton team did not have a large footprint there but because they were targeting Democrats and not swing or first-time voters.

“This was a perfectly logical strategic decision, considering the massive voter registration advantage that Democrats enjoy in the state,” Stein wrote. “But it meant that the Clinton campaign wasn’t able to anticipate the surge in Trump support in the rural areas because they weren’t having conversations with voters there.”

Clinton’s loss can be attributed to many factors. No one explanation for her failure is sufficient. But Democrats engaged in a self-serving exercise to transfer blame from their own failures cannot escape criticism for long. Eventually, Democrats will tire of blaming everyone but Clinton and her team for losing to someone even more unpopular than she. The anecdotes of betrayal and foreign intervention will fade into history, and all that will be left in the minds of most Americans will be a bad candidate and her bad campaign. 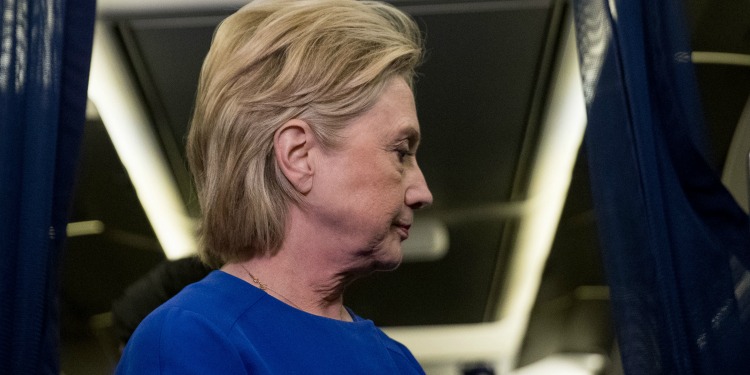