It has become almost a little gauche to chronicle the extent to which state-level lockdown orders are imposed only on those who are willing to be compelled by them. These casual hypocrisies are so numerous and the double standards so glaring that to belabor the issue is to flirt with monomania. And yet, the public deserves the fullest understanding of how their patience is being abused and how the public fear of a resurgence of COVID-19 is being exploited for political purposes.

Let’s focus on New York and, in particular, the epicenter of the pandemic in the United States, New York City. For months, state and city public health officials berated anyone seen to be flouting emergency public health guidelines, especially young people. It was only when anti-police violence protests erupted around the country that elected officials and public health experts alike softened their views on the essential nature of mass gatherings. That is, unless you were a business owner or service provider. For those poor souls, the force of law around state-mandated closures still pertains. Those who violate social-distancing guidelines or open a business in violation of the terms of the lockdown, for example, were and remain subject to prosecution. Protesters who violated disorderly-conduct statutes or emergency-curfew provisions over the last several weeks are exposed to no such penalties.

Even as the city begins to enter a more relaxed phase of the lockdown, that hypocrisy has not abated. “We have received 25,000 complaints of reopening violations,” Gov. Andrew Cuomo asserted over the weekend, singling out the wealthy enclaves of Manhattan and the Hamptons. The governor then issued an ultimatum to his state’s unruly citizens: “Bars or restaurants that violate the law can lose their liquor license. People with open containers in the street can be fined. Police & protesters not wearing masks can be fined. Local gov’t must enforce the law.” Meanwhile—and I mean at the exact same time—in Brooklyn, tens of thousands of New Yorkers gathered in a densely packed setting to demonstrate in favor of fair treatment for transgender African Americans. If those involved in that event were as much a threat to public health as outdoor diners in Long Island or curbside bar-goers on St. Marks Place, New York’s public officials have not said as much.

This is not to say that the city has done a total about-face when it comes to punishing protesters. Over the weekend, the New York City Parks Department was targeted by hundreds of young Jewish children who gathered in defiance of social-distancing guidelines and called on Gov. Cuomo and Mayor Bill de Blasio to “end the madness” and “immediately reopen our playgrounds.” They had in mind one park in particular—a commons in Williamsburg, just a few miles from the site of this weekend’s mass gathering at the Brooklyn Museum. But the mayor has insisted that all parks should remain shut out of “an abundance of caution,” as though that caution hadn’t been entirely dispensed with for the better part of the last three weeks. The city’s response to this demonstration was swift: On Monday morning, Parks Department officials welded the park’s doors shut.

On Sunday, more evidence emerged that a different set of rules applies to New Yorkers who violate public health imperatives but do so in service to causes that resonate with Democratic politicians. The City reporter Greg Smith discovered that the city’s nascent “contact-tracing” program had carved out a special exception for protesters. Dr. Ted Long, the head of New York City’s efforts to track down the individuals with whom a virus-carrier had contact, spent weeks urging anyone who was part of the protest-related crowds to get tested. But Smith discovered that the city’s tracing regime has all but gone out of its way to avoid the investigatory work that would make such a program effective. “No person will be asked proactively if they attended a protest,” said Blasio’s spokesperson Avery Cohen. In sum, contract tracers won’t be doing much contact tracing if it might lead investigators back to these previous weeks of state-endorsed protests. Perhaps the city does not want to discourage stricken protesters from participating in the city’s tracing regime. Or maybe they want to avoid an ugly headline if the city’s hospitals begin filling up again.

There can be no doubt at this point that lockdown orders are reserved for only the least favored constituencies. Those who do not gather in menacingly large numbers, who do not display the proper outrage toward the offense de jour against social justice—they are the most imposed upon. And yet, with the national zeitgeist suddenly rediscovering the anxiety over COVID-19 that conspicuously disappeared over the first two weeks of June, there is now talk among Democratic officials about rolling back phased re-openings. The threat to public welfare is suddenly too great to abide carelessness. And these officials could do just that. After all, the force of law appears only to apply to those who do not congregate in large enough numbers to render the law unenforceable. It seems it is incumbent on the nation’s law-abiding business owners, service providers, and the consumers who patronize them to figure out how this game is played and play it. 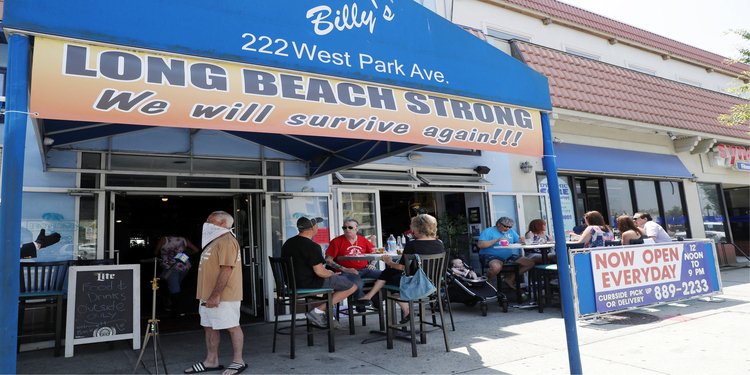