Before Hillary Clinton ruined it by endorsing a wish list of fanciful progressive policy proposals, the Democratic National Convention spent a second consecutive day appealing to the non-ideological American center. The Democratic program struck notes of optimism and hopefulness. It was a production that celebrated an inherent American greatness that is not contingent on who it elects as president. In doing so, Democrats appropriated from the GOP one of their most potent weapons—the idea that American exceptionalism is not dependent on its circumstances but is constant and intrinsic. That is an idea that the Republican Party under Donald Trump not only seems to reject but also finds unpalatable.

Prime time programming for the final day of the Democratic convention was a lot like the third day. With the exception of Hillary Clinton’s Edward Kennedy impression, the programming was designed to appeal less to frustrated radicals still feeling the Bern as it was to persuadable center-left independents and crestfallen anti-Trump Republicans. On both days, Democrats used patriotism to achieve this effect. The Democratic activists and delegates in attendance got the message. The final day of the convention featured average Democratic conventioneers embracing not merely the military but the job the military does—killing America’s enemies. For Republicans who came up amid the Bush administration, watching Democrats chant “USA” while a stage full of military brass pledged to destroy “evil” was uniquely disorienting.

From business leaders to members of the police and the military to clergy with an overtly religious message, the face the Democratic Party presented to the nation wasn’t its traditional one. This was not a Democratic Party that accepted the idea of America as a fundamentally flawed country. This was a convention that celebrated the United States from its founding with so few reservations or qualifications that an audibly irritated liberal element in the audience never stopped booing.

Now, there is a practical reason for this departure from Democratic form. This party is attempting something very difficult in trying to maintain control of the White House for three consecutive terms. It’s only been accomplished once in the post-War era, in 1988. The conditions today–rampant economic pessimism and widespread frustration with the direction of the country–do not favor Democrats. It is simply impractical for the party of Obama and Clinton to campaign for another term in the White House by dwelling on the suboptimal state of affairs. Though a variety of speakers alluded to the public’s dissatisfaction with the path down which the country is headed, including Clinton herself, the party had little choice but to adopt an optimistic, patriotic endorsement of the status quo.

Yet the Democratic Party had the luxury of espousing a positive message because the party largely rejected its defeatist elements. Donald Trump’s repeated overtures to Bernie Sanders’ voters are not the result of whimsy on his part. There is a lot of overlap in the sentiment shared by both Sanders supporters and committed Trump backers, and it rests on the shared notion that the American experiment has failed them.

As many observed, the mood in Cleveland felt bleak, in part, because the party was nominating a candidate out of step with the party’s traditional center of ideological gravity, but also because the programming was so gloomy. It was a party committed to projecting anxiety about an uncertain tomorrow. To put on a sanguine affair would have alienated change voters. There is a reason why neither political party has ever so incautiously adopted a message of unqualified apprehension about the future. It’s a risky gamble in a nation so habitually aspirational. But the sense of apprehension that typified the RNC was a direct reflection of how the pro-Trump plurality of Republican primary voters feels. For so many of them, American greatness is now dependent on an unlikely reversal of a variety of inauspicious trends.

Republicans in Cleveland had little choice but to fully endorse this worldview. To appear too jubilant about the country could be construed as an endorsement of the direction in which it is headed. The Republican Party has pushed all its chips in on the idea that a majority of the country believes, as Trump contends, that average Americans have lost a sense of economic and physical security. As The Federalist’s David Harsanyi observed, this may have a detrimental effect on the right’s ability to appeal to the public long after 2016. This dynamic has allowed the far-left to frame their radically progressive policy preferences as just another example of noble American idealism.

The GOP has for generations been a party of unashamed flag-waving pride. For its voters, defending the integrity of existing American institutions against a tide of liberal vandals was paramount. This lack of self-consciousness once struck the left as gauche, thoughtless nationalism, and they weren’t shy about saying as much. For the right, American greatness was constant; for the left, it was conditional. Not this year. Maybe not for many years to come. 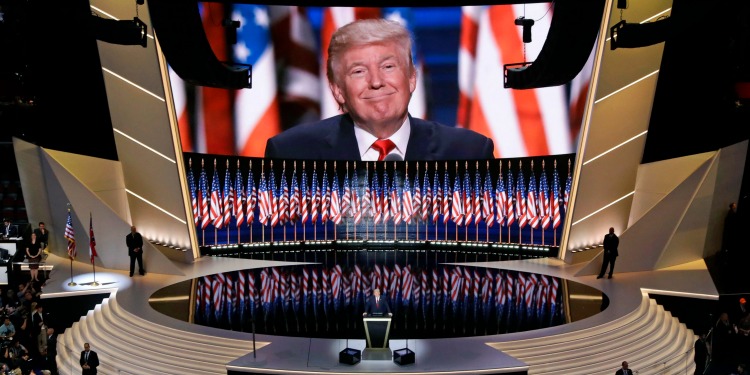