The occasion of House Speaker Paul Ryan’s retirement from Congress at the end of this term has spawned a variety of premature conclusions about the evolutionary trajectory of the Republican Party. The most common are those that contend this is only the latest sign that Ryan’s ideology—a small-government ethos espoused by modest public servants—is dead; this is Donald Trump’s party now. Well, that’s no earth-shattering revelation. The power of the presidency is such that both parties inevitably become reflections of their most prominent elected officials. Perhaps all GOP resistance to Trump and Trumpism has finally been stamped out, but you wouldn’t be able to reach that conclusion from listening to Ryan’s exit interviews. For anyone who isn’t invested in ushering Paul Ryan’s vision into an early grave, the Speaker has made it clear that the ideological confrontations between Trump’s allies and conventional conservatives are far from over.

“I can’t speak to that,” Ryan told NBC’s “Meet the Press” host Chuck Todd on Sunday when he was asked if he shares the president’s vision for the future of the GOP. Ryan sought to highlight the policy areas in which the pre-Trump GOP was united with the post-Trump GOP, but he was not unwilling to draw distinctions. “It’s a big-tent party, and we represent different corners of the tent.”

At face value, this would seem like a live-and-let-live view of how Republican officials should operate going forward. And yet, there are at least some ideational inclinations that Ryan would not countenance. Todd noted that Ryan and some of his retiring Republican colleagues, including Trump-skeptical officeholders like Sens. Jeff Flake and Bob Corker, declined to treat their Democratic opponents like “the enemy.” Without correcting him, Ryan launched into an assault on what he seemed to perceived Todd to be describing: identity politics.

“Do not fall for identity politics,” Ryan said. “Identity politics was, I think, a craft of the left for a while. . . but it’s now a practice on the right.” The outgoing speaker attacked the tactical political considerations that lead polemicists on both sides of the aisle to “exploit divisions between people,” and those divisive effects are being amplified by new mass-communication technologies such as social media. “No, I don’t think identity politics is right,” he closed. “Unfortunately, it’s been proven to work here and there, but I don’t think it’s the right way to go and I think it’s something that we all as Americans need to confront.”

This attack on the practice of identity politics by both parties is an expression of a long-standing conservative critique of Donald Trump’s political style. Conservatives with wildly divergent opinions about how Donald Trump has handled himself in office were not shy about calling out Trump’s identity-obsessed campaign for what it was. By stoking American fears about foreign labor stealing jobs, foreign competitors rendering them obsolete, foreign hordes itching to infiltrate the United States with murderous designs, and the personal hatred for the “forgotten man” espoused by the domestic political opposition, Trump wasn’t running on a platform as much as an affectation.

Trump would surely like to revive the New New Nationalism for his 2020 bid, but that is the kind of campaign only a non-incumbent can successfully run. Identifying select groups who have been underserved by government and transforming them into righteous and aggrieved victims deserving of recompense is harder to pull off when you’re the representative of that government. Moreover, Republicans seeking to contrast themselves with their Democratic opponents will find a stark and simple point to be made in focusing on Democrats’ preoccupation with American tribes.

The Democratic Party’s grassroots energy is derived from groups that cannot divorce themselves from toxic figures like the cop-killer Assata Shakur and the anti-Semite Louis Farrakhan for fear of alienating potential allies. It’s the party that cannot express unqualified support for local police without appending a caveat about the legitimacy of the Black Lives Matter movement. This is a party that cannot debate issues such as access to housing, economic adversity, or energy policy without auditing the relative impact of those policies by demographic group. Republicans will be naturally inclined to highlight this divisive absurdity. That incentive may naturally render Donald Trump’s appeals to identity politics an aberration. Even if Trump remains committed to his 2016 themes, though, these conditions will ensure that many more aspiring Paul Ryans will one day follow in his footsteps.

What’s more, the idea that Ryan or small government conservatism has no constituency is an aspiration, not analysis. The most recent survey of GOP voters (from late December via SSRS, sponsored by CNN) found that Ryan has a 66-percent approval rating among Republicans with only 19 percent disapproving. That 19 percent is no doubt overrepresented among opinion makers in the mainstream and alternative conservative press, but Ryan does not inspire the kind of hostility among average Republican voters that he does on conservative airwaves.

Nor are Republican voters hostile to the small government conservatism to which Ryan adheres. His philosophy is lent legitimacy and gravity as a result of the acute challenges it seeks to address: local control over education funding as a result of a decline in student outcomes; a reduction in the power of unions to curb their ability to dictate the terms of labor and pension regulations; a robust and extroverted engagement in the world to prevent threats from metastasizing; and, of course, a proactive approach to the looming debt and entitlement crisis. These positions aren’t born of nebulous political theory but of necessity. Donald Trump has proven that he can be persuaded by the uncompromising logic of the crises that gave birth to them. Those conditions are not going away, and they will continue to give rise to new Jack Kemps and Paul Ryans in the foreseeable future.

As Paul Ryan walks off into the sunset, beware triumphalism over his exit. This is contrived jubilation. It’s most certainly Donald Trump’s GOP today—a reality that even many of the president’s most committed supporters would admittedly prefer to the conservative alternative. But that is by no means a permanent condition. Paul Ryan’s GOP is routed but not demoralized. Just ask its members. 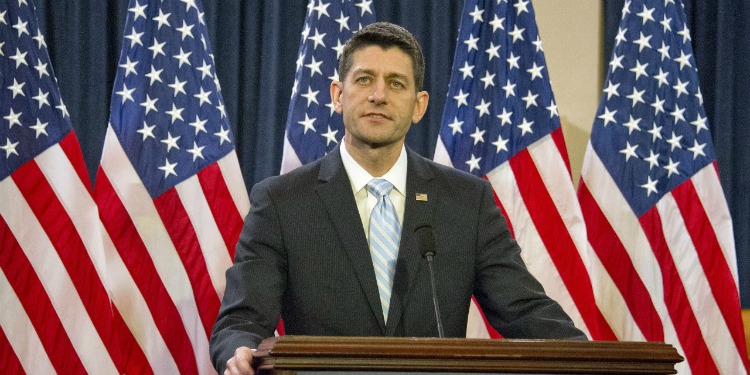