For nearly a week, the White House diligently prepared reporters for bad news. January’s jobs report, they said, would be abysmal. Like any competent political operation, though, the Biden administration also retailed a narrative that they hoped to see regurgitated in the reporting on that data: The economy would look like it was shedding jobs only because Covid’s Omicron wave was so widespread. The payroll processing company ADP illustrated just how bad the data might be on Wednesday when it forecast that private employment had declined by 300,000 jobs in January—well below expectations that payrolls would increase, albeit by an unimpressive 200,000 jobs.

On Friday, the jobs numbers came in well above expectations. Private, non-farm payrolls didn’t contract in January; they expanded by 467,000—well above even the most optimistic forecasts. Everything from restaurants and bars, professional services, transportation, and even retail—a sector that usually suffers after the holiday season—expanded. Indeed, the labor-force participation rate grew by three-tenths of a percent, representing hundreds of thousands of people reentering the workforce. Moreover, the rate of job growth in the month of December was revised upward by more than half a million jobs. Not only did the job market endure through the Omicron wave, it thrived—growing by almost a million jobs.

This wasn’t supposed to happen. Throughout the Omicron surge, mainstream media outlets maintained that this variant would force Americans back into a terrifying defensive crouch, and they would take the economy with them. “Omicron is pushing America into a soft lockdown,” read a December 26 headline in the Atlantic. Workers, Sarah Zhang forecast, would engage in a “voluntary suspension of activity” even without formal orders to shelter in place. Dispatches from America’s most neurotic cities seemed to confirm Zhang’s thesis. A “somber” feeling had descended across the commercial landscape as restaurant-goers canceled their reservations and stores shuttered due to sick-outs. “Omicron’s fallout, which is likely to worsen before it eases, shows that the recovery remains vulnerable to the coronavirus’s unpredictable trajectory,” the Washington Post’s January 6 report on the national mood read. “The cumulative impact,” the New York Times reported just last week, “is larger than at any other point in the pandemic.”

We can now conclude that the anticipated effect this wave of infections would have on social and economic stability was wildly overestimated. But who within the Democratic Party’s intellectual firmament is willing to say that? “We’re probably going to have a bad jobs report in the end of this week,” Federal Reserve Bank of Philadelphia President Patrick Harker told reporters this week. “I mean just because of omicron.” The conventional wisdom was wrong, and that should lead observers to an inescapably obvious corollary. If an economic downturn would have been attributable only to Covid, an unexpected uptick is also attributable to Covid—specifically, our collective ability to persevere through it as a fact of modern life.

What more is it going to take for the White House and its constituents to realize that Americans are moving on from the pandemic, with or without them? They are voting with their wallets—producing, consuming, and rejoining the job market at numbers that suggest they are not intimidated by the world outside. They are voting with their feet—millions of Americans decamped from states with the strictest Covid mitigation measures to states without them, primarily in the Southeastern United States. They are voting with the way they speak to pollsters—7 in 10 Americans, including nearly half of all Democrats, now agree that “it’s time we accept that Covid is here to stay and we just need to get on with our lives.” They are voting with their actual votes—routing Democratic candidates in off-year elections in Virginia and New Jersey, where the voters’ verdict was heard loud and clear, and the political class is beginning to accept the need to sunset 2020’s emergency measures.

The Biden administration was politically competent enough to get ahead of what it thought would be bad news. The Biden team shaped and molded a preferred narrative around it. They retailed that narrative to reporters, and its recipients were prepared to enforce message discipline around the idea that a bad jobs report was temporary and explicable. The White House should, therefore, be capable of retailing another message: a positive message. But this president and his courtiers seem constitutionally incapable of striking a sanguine note.

Hours after the publication of January’s positive economic data, Joe Biden took to the podium to tout his administration’s successes. But he qualified his remarks with a perfunctory nod toward the clinical depression that typifies modern Democratic discourse. “I know that January was a very hard month for many Americans,” Biden said. “I know that after almost two years, the physical and emotional weight of the pandemic has been incredibly difficult to bear for so many people.” All this empathy is smothering the good news.

As one Biden official told Politico, the administration knows it needs to “reset people’s expectation that they can get back to joy.” But they don’t want to do so in a way that exposes them to any political risk in the event that the pandemic takes another unexpected turn. So they’re left to forecast a near future in which “we’ll start to see a gradual return to normal, even though normal will not be exactly the way it was before all of this.” That is not good enough. A critical mass of the voting public is sending every possible signal that it won’t accept this new, substandard normal in perpetuity. Either Democrats will deliver what voters expect from them, or they will find someone who will. 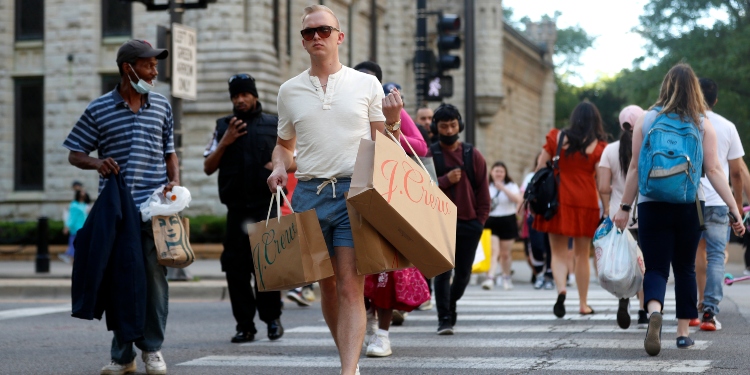