Russia’s three-month-long buildup of military forces along Ukraine’s borders culminated in a flurry of activity over the weekend that revealed the full scope of Vladimir Putin’s intentions. For all the preamble, though, the way Russia went about securing its illegitimate territorial ambitions was more terrible than many observers allowed themselves to imagine.

In an unexpected move, Moscow’s assault on the post-Cold War geopolitical order began with the reintegration of Belarus into the Russian mandate. The so-called military exercises Russia was conducting inside Belarus would continue indefinitely, Moscow announced, and Russia would maintain a permanent troop presence inside the country. Thus, lacking an independent foreign policy or domestic policy and being beholden to Russia to ensure the stability of Alexander Lukashenko’s regime in Minsk, Belarus has become a satrap. One down; one to go.

From there, events followed a trajectory forecast almost to the letter by Western diplomatic and intelligence officials. Russian proxy forces in control of the alleged “breakaway” provinces in Ukraine’s Donbas region began shelling the “line of contact,” bombing its own infrastructure, and begging for Russia’s military assistance. What happened next, however, likely took some Western officials off guard.

Putin convened a meeting of his national security council, broadcast on Russian television, wherein the Russian autocrat pressed his advisers for their views on whether Moscow should recognize the independence of the breakaway province. All in attendance endorsed that course of action—indeed, anyone who displayed even a hint of reluctance was badgered by Putin into backing his predetermined course of action. With that, the whole of the Russian regime implicated themselves in the crimes to come.

Perhaps the most revealing (and unnerving) moment of the present crisis occurred hours later when Putin delivered an address to the Russian public. In a meandering, ponderous peroration that took his audience on a journey from the 17th Century Tsarist seizure of the Black Sea coast, to the Bolshevik Revolution, to the collapse of the Soviet Union, Putin explained to the world why Ukraine does not have the right to exist. Even the bleakest of publicly available Western intelligence assessments had not crystalized the Russian threat to Europe in quite the way Putin did in that speech.

The starkness of the crisis Putin was prepared to unleash upon Europe was laid so bare, in fact, that no one allowed themselves a sigh of relief when Moscow deployed Russian forces only to the occupied regions of the Donbas. Russia’s designs on Ukraine are not limited to the regions Moscow already functionally controls. If Putin’s lecture on Tsarist history is any indication, they may not even be limited to Ukraine.

And yet, the West’s response has not yet been as resolute as the moment demands. “We will continue to pursue diplomacy until the tanks roll,” said one U.S. official as the tanks were literally rolling. Another unnamed U.S. official went on to further confuse the American position by describing Russia’s action as “not itself a new step.” You see, Russia had maintained a covert military presence in the Donbas since 2014, so the overt introduction of troops into the region was not an escalation.

This was nothing less than a blink in the face of a direct threat to Western interests. It was a walk back from Joe Biden’s January 20 assertion that if “any assembled Russian units move across the Ukrainian border, that is an invasion.” Moreover, it legitimizes the apparent Russian view that changing the facts on the ground by force is a valid and effective form of statecraft.

The European response to events in Ukraine has been tougher. There’s Germany’s reversible but crucial suspension of the Nord Stream II pipeline, for example, and the U.K.’s targeting of wealthy Russian oligarchs. But if Russia can still be deterred from further reckless adventurism of the sort that risks accidental conflict with the NATO-aligned powers that surround Ukraine, the West needs to muster a more comprehensive and long-term response to Russian aggression.

That prospect alone surely terrifies Western leaders because it involves absorbing real and sustained pain. Joe Biden hasn’t papered over the price Americans may have to pay in the defense of the geopolitical order we’ve enjoyed for the last 30 years. “I will not pretend this will be painless,” he said last week. The president alluded to the potential “impact on our energy prices” that could follow a sustained campaign of economic warfare against Russia, but he didn’t go into detail. That’s understandable because the details are tough to contemplate.

Russia is the second-largest exporter of petroleum products to the United States, and the administration appears to have little taste for paring back that reliance. If the West intends to comprehensively sanction the Russian regime, it will need to target its most lucrative export—energy—and Russia will retaliate.

Goldman Sachs estimates that disruptions in Russia’s energy exports could push the price of Brent crude up to or above historic records. That could in turn push U.S. inflation rates well above 10 percent, further reducing Americans’ purchasing power and increasing political pressure on this first-term presidential administration to relieve that hardship. Europe, which is far more reliant than the U.S. on Russian energy, will be even more acutely affected by such a sanctions regime. Keeping the Atlantic Alliance on the same page will be a full-time job. But this is the only serious course left to the West. Sanctions that average Russians feel only in the form of “higher prices for food and clothing” or even devalued “pensions and savings accounts” won’t destabilize the Russian regime, and it won’t send a single Russian soldier back to permanent bases inside the Federation.

If Biden is serious, he needs to level with the American public. We are witnessing in real-time the death of a geopolitical order that has well served both Americans and the world. This must be resisted with all the force that prudence allows. Resistance won’t come without sacrifice, but it is a sacrifice we all must be asked to make if we are to preserve the world our parents and grandparents struggled to bequeath to us. 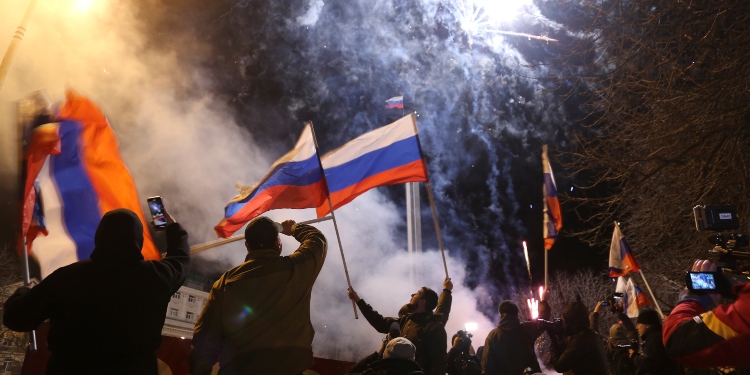