Donald Trump’s supporters should be furious with him, but the evidence so far suggests they’re not. They should be in the midst of an existential crisis, but few seem to be. The uncompromising stand that their candidate took on the issue of immigration—a stand that set him apart from not just the sprawling field of GOP primary candidates but all political orthodoxy—vanished into the ether in a week. And yet those Trump wooed with his blunt border talk appear willing to subordinate themselves to the cause of remaking their man in the image of someone who might have a fleeting hope of winning the presidency. In that compromise, however, Trump fans have come to see what pro-immigration reform Republicans knew all along: The celebrity candidate was only using his supporters.

Trump conceded on Tuesday that he might consider “softening” of the laws governing the treatment of illegal immigrants. By Wednesday, this new position evolved into virtual amnesty. “No citizenship,” Trump assured his flock, before adding, “They have to pay taxes. There’s no amnesty, as such, there’s no amnesty, but we work with them.” Compelling illegal immigrants to pay “back taxes” is part of all legalization and normalization plans since the reviled Gang of Eight bill. In fact, there isn’t much in Trump’s new pitch that doesn’t resemble Jeb Bush’s or Marco Rubio’s position on immigration reform: back of the line, pay a fine, and come out of the shadows.

Trump’s original plan called for the speedy construction of a wall along the entire US-Mexico border and 25,000 new border guards. He advocated a “deportation force” that would locate and deport the approximately 11 million illegal aliens in the United States, favorably modeled along the lines of the crudely named Eisenhower-era scheme “Operation Wetback.” Trump would have mothballed the nation’s deportation centers, the humane conditions of which his followers insist are actually drawing immigrants to the United States. Finally, Trump would have imposed federal restrictions on in-state tuition for the children of illegal immigrants and reversed Barack Obama’s executive orders implementing the DREAM Act, which prevents the deportation of those children.

Most of this has been subject to revision over the past two months. “No, I would not call it mass deportations,” Trump insisted when asked if that was still part of the plan in June. In a shift, the GOP nominee lauded Barack Obama, who “mass deported vast numbers of people—the most ever, and it’s never reported.”  Praising Obama’s record on deportation has been part of Trump’s rhetorical repertoire ever since.

“There could certainly be a softening because we’re not looking to hurt people,” Trump said when asked if he would seek to change the laws to provide residency to law-abiding, longtime non-citizen residents. “We have some great people in this country.” But law is the province of the legislature, and, you know, that makes it hard to change. “If you start going around trying to make new laws in this country it’s a process that’s brutal,” Trump added. So how would President Trump pursue his vision for softer immigration laws? Executive actions, presumably. Or perhaps he would simply keep Barack Obama’s orders on the matter in place.

While some of Trump’s most stalwart backers are sending signals of displeasure, they cannot abandon him. Their fates are now intertwined. Immigration hardliner Steve King and early Trump endorser Jeff Sessions have expressed some disapproval of Trump’s new position, but they know Trump remains as close to a champion for their views on immigration as they will ever get. They’re not going anywhere; where would they go? Trump booster Ann Coulter went so far as to couple her career with Trump’s success. She pledged to abandon her new pro-Trump book tour if he violated the one pledge she wrote would lose her support: “Change his immigration policies.” Though clearly perturbed, it does not seem she will renege on her fiduciary responsibilities to her publisher. The rest of the talk radio circuit just seems to have gone silent on Trump’s immigration platform for the moment.

In embracing a chameleon who only found them temporarily convenient, the right’s immigration hardliners have sowed the seeds of their own ideological destruction. They have demonstrated that their policy preferences will never become law because they are so unpopular that even their champions abandon them eventually. “This is about generating votes among whites,” John Podhoretz noted last night. Trump’s stance on immigration, not to mention race and culture, is turning off members of Mitt Romney’s coalition of voters, to say nothing of Barack Obama’s. For everyone who forgot the hash that was made of the innocuous phrase “self-deportation,” Trump has demonstrated again that the King-Sessions-Coulter wing of the GOP is the losing wing of the GOP.

So here they are: supporting a candidate pitching Marco Rubio’s immigration plan but without Rubio’s charismatic ability to sell it to voters. Republicans who backed Donald Trump wanted all or nothing when it came to immigration, and they will get nothing. 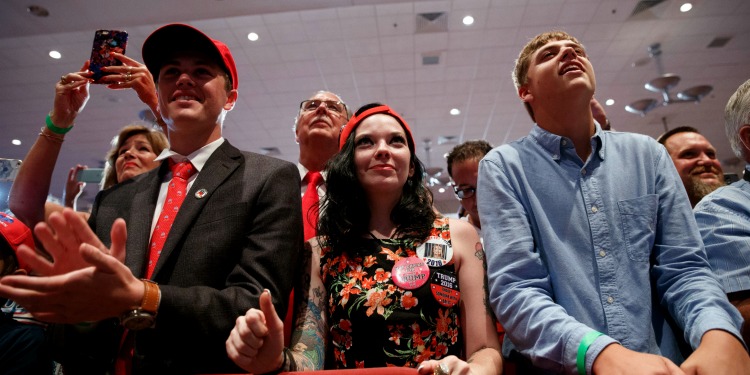