Among the valuable revelations to follow the publication of Robert Mueller’s report is how divorced partisan political culture has become from anything resembling rationality.

The pro-Trump side of the ledger has unreservedly wrapped its arms around the report’s conclusions, though that must come as a bit of a surprise to its authors. The special counsel’s investigation painted a portrait of a mendacious cabal of incompetents, most of whom were perfectly willing to accept the aid and support of hostile state and non-state intelligence apparatuses even if they weren’t actively conspiring with them. The president would have actively subverted the investigation into his conduct, too, if he wasn’t surrounded by subordinates who either ignored the nominal chief executive’s orders or declined to execute them outright. It’s a testament to the Democratic Party’s failure to manage expectations around this investigation that the president’s allies are celebrating its conclusions.

That bungling of the expectations game has yielded a similar pathology in the Democratic grassroots. So intense was the desire to see Mueller’s office set into motion events that would prematurely deliver the nation from Donald Trump’s presidency that they have all but rejected the report’s conclusions and substituted their own. As such, the progressive activist class is increasingly inclined to determine that impeaching the president is the only prudent response to Mueller’s report. This puts them on a collision course with the Democratic Party’s elected officials.

If the political press is indicative of sentiments in the Democratic activist class, the demand that House Democrats inaugurate impeachment proceedings is nearing the point of critical mass. “Postponing impeachment,” Harvard Law School Professor Lawrence Tribe wrote, “no longer makes sense.” Princeton University Historian and CNN contributor Julian Zelizer appeared to agree. “If Democrats do nothing and let the Mueller report sit, the party could end up fueling [Trump’s] main talking point,” he concluded, “that this was all a just a ‘fake’ partisan hit job and there was nothing there.” New York Times opinion writer Charles Blow endorsed impeachment as a form of “rebuke,” while former Obama administration official Ronald Klain seemed to view it as a platform from which Democrats can air a variety of grievances with the president. CNN analyst Asha Rangappa said it was necessary to deter foreign powers from intervening in the American political process.

This caution is warranted. Impeachment proceedings will compel Democrats to demonstrate that Trump’s failed attempts to obstruct justice demand extraordinary means of redress beyond even censure. They know this is an uphill battle as a communications strategy. It sacrifices the Democratic Party’s opportunities to make a positive case for itself in favor of an exclusively negative case against the president. What’s more, impeachment proceedings shine a spotlight on Congress, which is not a popular institution, while shifting the focus off the Democratic Party’s eventual presidential nominee.

For the party’s base, however, these political concerns are craven and capitulatory. If Democrats decline to pursue impeachment on political grounds, New York Magazine’s Eric Levitz admonished, “they will confirm that their party is just another one of our republic’s failing institutions.” Slate’s Mark Joseph Stern saw in Mueller’s report a coded indictment. “If Congress ignores it,” he wrote, “it will have failed the special counsel and the American people.” The temptation to indulge the base’s desires is so great that it would be impossible for all the myriad Democrats seeking traction in the race for the party’s presidential nomination to disregard it. Elizabeth Warren became the first candidate to demand that the House inaugurate impeachment proceedings, and she may not be the last.

But this demand, if it goes ignored, will soon force these candidates to campaign not just against Trump but also against the Quislings who populate the Democratic Party’s caucus in the House. Warren and the Democrats who follow her lead will face two choices if Democrats in the House dismiss their calls for impeachment proceedings: appear impotent or attack the party’s unpopular leaders in Congress. This is no choice at all.

It was not long ago that Democrats who convinced themselves that their party was too responsible to succumb to a populist rebellion were disabused of that notion. It may not be long now before those same Democrats discover that political cannibalism is not the exclusive province of the Tea Party. 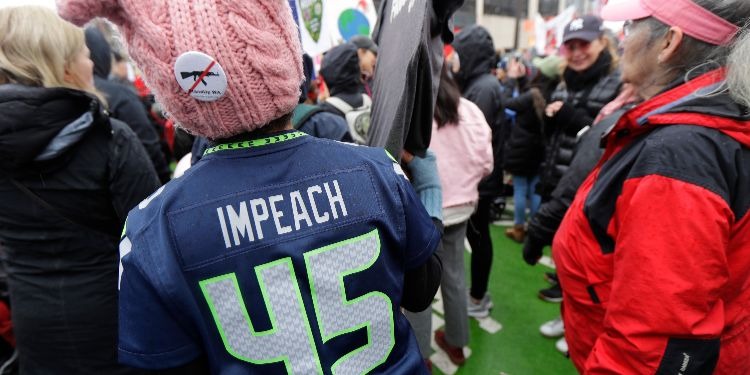