President Donald Trump is not shy when it comes to threats. Ally and adversary alike have been the targets of explicit presidential ultimatums, and the president tends to get what he wants. But when it comes to Iran, Trump appears to have met his match. Over the last two months, Iran has engaged in an escalating series of violent provocations. All of them seem calibrated to gauge America’s resolve to defend its interests and guarantee the freedom of maritime commercial navigation. If these are tests, they have found Trump wanting.

What has now become a full-fledged crisis in the Middle East began in early May, when American officials indicated that credible intelligence suggested Iran or its proxies in the region were preparing strikes on U.S.-affiliated targets. Reluctantly, the White House dispatched aircraft carriers, B-52 bombers, amphibious landing vessels, and Patriot anti-missile batteries to the region. Those assets were followed by the deployment of a few thousand soldiers—a deterrent force sufficient to respond to and potentially prevent aggression, but not to preemptively neutralize a military threat.

Not to worry, American officials told the New York Times. The administration was aware that “Iran is trying to provoke the United States for its own political purposes,” which “is an important insight that could help the Trump administration avoid a needless escalation with Tehran.” After all, any engagement with Iran “would run counter to President Trump’s desire to reduce the overseas deployment of troops.”

Those ominous American intelligence assessments proved prescient. On May 12, four vessels were attacked. These included two Saudi oil tankers off the coast of the United Arab Emirates near the critical Strait of Hormuz. Saudi Arabia, Norway, and the U.A.E. informed the United Nations Security Council that the “sophisticated and coordinated” operation involved expert navigation, fast boats, and precision divers who planted mines below the waterline of the targeted ships—a mission that must have involved a “state actor.” According to American intelligence assessments, that state actor was Iran. But when asked how he planned to respond to this attack on international commerce, Trump replied simply, “It’s going to be a bad problem for Iran if something happens.”

Of course, something had happened. And it happened again a little more than one month later when another similarly sophisticated attack disabled two more tankers in the Gulf of Oman. And how did Trump respond? He dismissed these brazen assaults on commercial shipping interests as “very minor.”

This consistent pattern of Iranian escalation has been met with apathy from the president, culminating in Iran’s announcement Thursday morning that it had just shot down an American reconnaissance drone. To this attack on a $120 million, 100-foot wingspan aerial surveillance vehicle Trump again responded with dispassion and detachment. “I find it hard to believe if it was intentional,” he said of the attack for which Tehran claimed responsibility. He blamed the act of aggression, instead, on a rogue operator who was acting “loose and stupid.”

Maybe the president is providing Iran with an off-ramp to deescalate tensions, but Tehran has shown no interest in paring back its provocations. The administration has so far preferred to adhere closely to its strategy of using economic and diplomatic pressure to foment instability inside Iran with the hopes of forcing the Mullahs back to the negotiating table in a more conciliatory posture. Tehran’s provocations are no doubt an effort to derail the administration’s maximum pressure campaign. The White House is well-served by preserving the peace, but not at any price. There is a point at which restraint becomes negligence.

Iran is testing American resolve, and it will continue those tests until it encounters a limit to its freedom of action. This is not a cost-free proposition for the United States. As the U.S. sacrifices its role as guarantor of the right of navigation on the high seas, its allies who rely on that naval power will become ever more insecure. Some will look to America’s peer competitors for protection. American hegemony will wane, more aggressive challenges to its military dominance will follow, and the peace and prosperity that have been the byproducts of a global, U.S.-guaranteed marketplace will become a thing of the past. The stakes could, indeed, be quite high.

Donald Trump has said the only thing that would move him toward a preemptive strike in Iran is “nuclear weapons,” but that’s the wrong answer. The last time the U.S. engaged in an exchange of fire with Iran was 1988, a devastating military response to Iranian efforts to obstruct naval navigation through the Persian Gulf. Iran has tested the United States like this in the past. Ronald Reagan passed. So far, Trump has not fared as well. 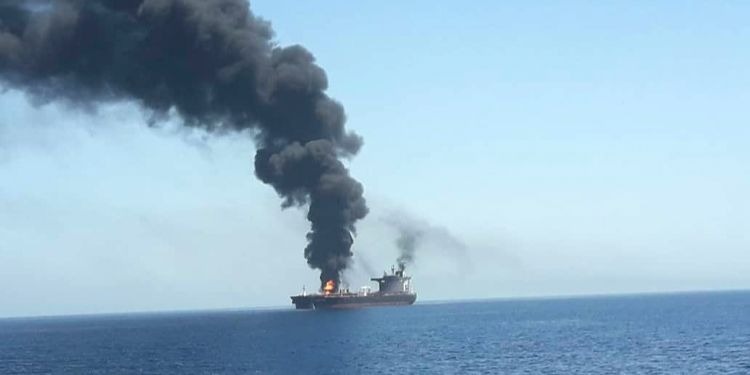