This was the week the Russians blinked. At least, a little.

In a bid to boost its ailing currency and combat the effects of the crippling Western-led sanctions regime, Moscow recently demanded that European recipients of Russian gas and oil shipments pay for energy in rubles. This would abrogate the Kremlin’s contracts with its European trading partners, but Putin’s regime had reason to believe the Continent would fold. But Europe did not give in to this extortion play, and Russia reluctantly relented.

This is a useful signal. Though it is unfortunate that Moscow seems unwilling to sanction itself out of economic existence, leaving the West to do the heavy lifting on that front, it seems that Vladimir Putin’s regime can respond rationally to concrete incentives. That could prove valuable to Western analysts who are confounded by the irrational judgments and utterly unhinged nonsense emanating from the Kremlin on a seemingly daily basis.

From the outset of the present crisis in Europe, sophisticated Western analyses of Putin’s mental state have had to ignore much of what he says in public. After all, to take his pronouncements at face value is to dive deep into a rabbit hole reserved for ambulatory psychotics.

In a February 21 televised address, Putin mourned not just the dissolution of the Soviet Union but the loss of the “territory of the former Russian empire,” a vast imperial project that included not just the whole of Ukraine but also the Baltics, most of Poland, and part of Romania. He waxed nostalgic about Tsarist military campaigns against the Ottoman Turks and the conquest of the Black Sea coast. In what amounted to a declaration of war, Putin reiterated the logic of his oft-stated claim that Ukraine is not a legitimate state, but his speech set out irredentist objectives well beyond Ukraine’s borders. The only option available to Westerners is to assume Putin didn’t mean a word of it. To take him seriously is to contemplate the horrible consequences that would follow if Putin pursued his stated ambitions.

As tactical setbacks mounted in Putin’s war of conquest, the increasingly isolated Russian autocrat trained his rhetorical fire on his fellow countrymen, whom he deemed insufficiently supportive of Russian nationalism. On March 16, the Russian president lashed out at Russia’s “scum traitors” who lived abroad or failed to support his “special military operation” with appropriate zeal. Moscow would expectorate these rogues “like a midge that flew into their mouths.” They “can’t get by without” Western comforts and conventions, like “oysters, or foie gras, or so-called ‘gender freedoms.’”

Putin’s devolution into the typical basement-dwelling edgelord who spends his days perusing 4chan appeared complete the following week. In a meandering March 25 address, Putin coupled Russia’s plight with the ordeal endured by the author J.K. Rowling, who didn’t “satisfy the demands of gender rights.” Both Rowling and Russia have been victims of “cancel culture.” The autocrat expressed his resentment over the unfairness of Hollywood’s refusal to depict the Red Army’s exploits during World War II (a bizarre fiction). He also insisted that Russia’s rejection of “ethnic intolerance” and its appreciation for high culture ensures no artist would ever endure such repression. We in the West are left to conclude that this extremely online nonsense is a cynical appeal to Moscow’s Western sympathizers because no one could really believe this stuff. Right?

Maybe. But even outside the Kremlin, Russia’s actions give observers reason to suspect that the regime has bought into its own hype. In occupied territory inside Ukraine, billboards are sprouting up advising local residents “Don’t be afraid: speak Russian.” Of course, many native Ukrainians do and always have spoken Russian. Only if you believed Russia’s propagandistic agitation, much of which centers on the fiction that the Russian language is actively suppressed inside Ukraine, could such a campaign make sense. Likewise, Russia’s ambassador to France found himself in a diplomatic row after he published a cartoon on social media featuring Uncle Sam and “Dr. EuroReich” injecting “Europe” with syringes filled with Covid-19 vaccines, as well as “Russophobia,” “Neo-Naziism,” and “cancel culture.”

The information environment maintained by Russian civil society outlets is no less wacky. “The Rosemont Seneca Thornton fund,” an investment fund “governed by Hunter Biden,” as well as “the Soros Fund are involved in financing biological laboratories in Ukraine,” declared Soviet-era and now Russian news presenter Igor Kirillov. He led viewers on a paranoid journey through space and time before settling on the notion that the Pentagon was deeply involved in the development of Ukraine’s imagined biological-weapons capabilities. Likewise, Aleksandr Dugin, a Russian academic and frequent television guest, has articulated a vision of Russian manifest destiny culminating in a new empire stretching “from Dublin to Vladivostok.” The head of the Russian Orthodox Church, Patriarch Kirill, and his subordinates have for years peddled conspiracy theories about weekly “violence, beatings, fighting for churches” inside Ukraine. Nearly every aspect of Russian society is committed to the fiction that the legitimately elected government in Kyiv and its Jewish president are representatives of a “Nazi junta.”

Perhaps most unnervingly, Russia’s armed forces seem just as committed to cultivating an atmosphere of madness. Only if there were no social or reputational costs for such a thing could it be possible for the spokesperson for Russia’s Ministry of Defense to claim with a straight face that the United States is busily weaponizing Ukrainian birds. They are being repurposed as avian missiles designed to “distribute bacteriological weapons” inside Russia, Major General Igor Konashenkov insisted with all apparent seriousness.

Unfortunately, it is incumbent on Westerners to avoid dismissing all this just because it sounds to us like paranoid ramblings. Ignoring it could contribute to disastrous failures of imagination.

When, for example, Joe Biden spouts off on the need to see Putin removed from power—something the Kremlin has said is Washington’s chief strategic objective for years—we believe those comments are not destabilizing only if we also believe that Putin thinks as we do. “Putin won’t be triggered by words,” said former U.S. ambassador to Russia, Michael McFaul. “Putin will respond to hard facts on the battlefield.” That is, after all, how we behave. The Kremlin can issue all the bellicose pronouncements it wants, but you won’t see American forces react until and unless the movement of relevant Russian assets suggests it’s not just talk.

But we may be dismissing the effect of the information silos in which Vladimir Putin is operating. U.S. intelligence believes the Russian autocrat is being fed comforting misinformation by his own advisers. The Russian government is acting on some wildly flawed assumptions to its own strategic detriment. Every indication suggests the Kremlin’s madness is not a purely performative act.

As hard as it is for Western observers to lend any credence to Russia’s increasingly deranged narratives, Moscow might actually believe this stuff. 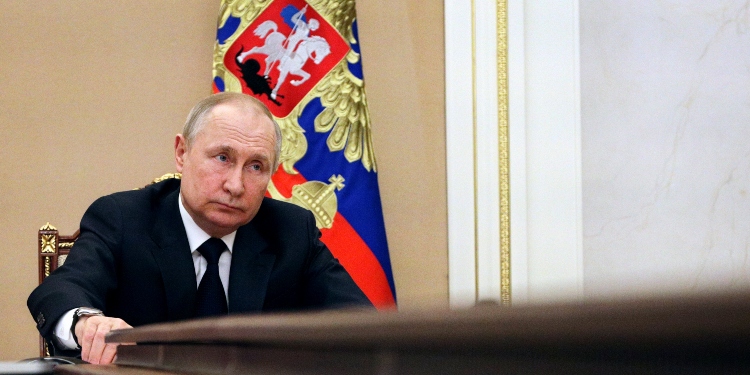