For the sin of refusing to unconditionally support the behemoth spending bills favored by progressives, Democratic Sen. Kyrsten Sinema has been forced to endure a threatening intimidation campaign. Sinema was harassed as she walked through an airport, verbally abused on an airplane, and chased into a bathroom stall by menacing progressive activists—and all of it on tape.

On Monday, President Joe Biden was asked about the senator’s ongoing torment. “I don’t think they’re appropriate tactics, but it happens to everybody,” the president said. “The only people it doesn’t happen to are people who have Secret Service standing around. So, it’s part of the process.” Biden is right. These aggressive tactics are now “part of the process,” and not just for legislators who stand athwart activists’ goals but average citizens who wander into the public spaces these agitators seek to commandeer. This unacceptable circumstance has been incubated by irresponsible politicians who stood tacitly by or even appeared to view harassment as an instrument of political utility.

While few Democratic politicians have countenanced the indignities visited upon their colleague, fewer were keen to speak up in defense of the Trump administration officials who endured this treatment.

“Let’s make sure we show up wherever we have to show up,” Rep. Maxine Waters urged in the summer of 2018. “And if you see anybody from that Cabinet in a restaurant, in a department store, at a gasoline station, you get out and you create a crowd. And you push back on them. And you tell them they’re not welcome anymore, anywhere.” Her remarks occasioned a rare rebuke from her fellow members, including Speaker Nancy Pelosi. But the event that moved Waters to endorse harassment as a political tactic—the eviction of Trump White House Press Sec. Sarah Huckabee Sanders from a restaurant to protest her politics—had already become endemic.

In January of that year, Trump’s chairman of the Federal Communications Commission, Ajit Pai, became the focus of a relentless persecution campaign. Amid the banal effort to repeal a three-year-old supervisory guideline involving Internet service providers, Pai became the focus of hyperventilating activists who elevated this regulatory mundanity to a literal “life-or-death” issue. Popular television hosts urged viewers to bombard his agency with insults, some of which devolved into racial antagonism. His home was staked out by activists who held 24-hour vigils. His young children’s faces were plastered on fliers posted around his neighborhood. His family was photographed and intimidated, his doorbell was rung at all hours of the day, and his place of work was targeted with bomb threats. This should have been a national scandal. But it was not.

Not long after Pai’s ordeal, Trump’s Secretary of Homeland Security, Kirstjen Nielsen, was similarly persecuted. “If kids don’t eat in peace, you don’t eat in peace,” activists barked at Nielsen as they descended upon her with the intent of ruining her experience at a local Mexican restaurant. The “social justice” activists’ intent was to refuse Nielsen the opportunity to “dine in peace” while the administration was executing a policy of family separation at the border. Despite its pursuit of a similar policy that comports with existing legal precedent, the Biden administration has not been subject to a similar pressure campaign.

More recently, Supreme Court Justice Brett Kavanaugh’s home has become the epicenter of an activist effort to intimidate the jurist out of his legal convictions. Last month, at least 50 demonstrators descended on the justice’s family home in Maryland and attacked him for a decision he had not yet rendered on a pending case before the Court involving abortion rights. Kavanaugh’s family is well acquainted with these terrifying tactics. During his confirmation hearings, when the he was tarred as a sexual predator moved to public life only by a sense of “white (male) entitlement,” Kavanaugh’s family received a series of death threats amid a familiar campaign of bullying.

Even average citizens are being drafted into this crusade to politicize private life. In the wake of the murder of George Floyd at the hands of a Minneapolis police officer (and ever since), social-justice activists have made it their mission to make life hell for regular folk who dare venture outside their homes. The widely publicized videos of demonstrators haranguing restaurant patrons, forcing them to declare their allegiance to their preferred program or suffer sometimes violent consequences, are not hard to find. Sometimes, even your own home isn’t sufficient refuge. Roving bands of protesters have recently adopted the tactic of cruising through what they believe are comfortable neighborhoods to afflict the locals, shining spotlights into their windows in the dead of night and shouting demands to “get into the streets” into bullhorns.

This is not an exclusively leftwing proclivity. Rightwing demonstrators have picketed the private homes of Democratic politicians with whom they disagree—Michigan Gov. Gretchen Whitmer and Washington D.C. Mayor Muriel Bowser, in particular. Election workers were terrorized and intimidated by protesters animated by Donald Trump’s baseless claims of election fraud. And following the January 6 assault on the Capitol Building, some lawmakers have even alleged that the sense of fear among their Republican colleagues was such that they were “afraid for their lives” if their votes contradicted a narrative preferred by the president and his self-appointed shock troops.

This conduct is more familiar to banana republics than mature democracies such as the United States. At least, it used to be. Joe Biden is lamentably right that the blurring of private and public life has become a feature of the modern political landscape, and that blurring is often accompanied by urgent threats to public servants and their families. But it should not be. After all, these activists are operating under the self-stated assumption that they are advancing a progressive agenda—Joe Biden’s agenda. Given his vaunted attachment to “civility,” the president is obliged to display a little more indignation than he has so far about the deployment of these sinister techniques in his name. 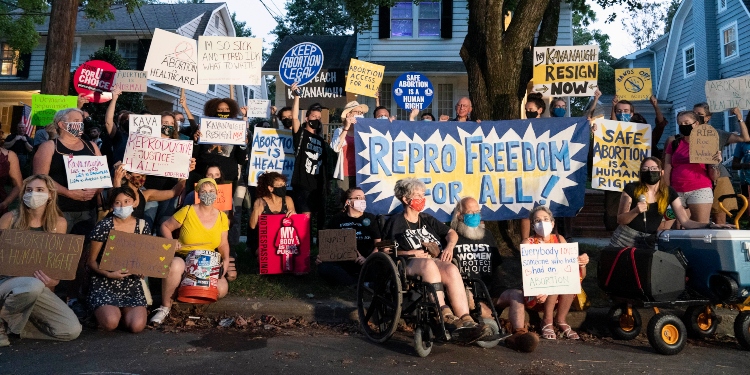