For those Democrats who subscribe to an academically Marxist worldview, the 2016 Republican primary race had only one possible outcome: Jeb Bush as the nominee. Don’t roll your eyes just yet; we’re not talking about a Leninist weltanschauung that seeks a proletarian rebellion and nationalizing the commanding heights of the industrial economy. In a traditional sense, those who lean to the left are generally more apt to see the world in terms of capital and class. Being the fundraising leader by a substantial margin and as the scion of a political dynasty, many Democrats contend that the GOP’s nominating contest is mere theater. The game is rigged. This is, however, increasingly a theory in search of supporting evidence. If the 2016 race has demonstrated anything, it is that campaigns and candidates matter. The notion that democracy is fundamentally undermined by big money and that high-dollar donors control outcomes is being tested to the breaking point.

The Supreme Court’s decision in Citizens United was a panic point for many on the left. In 2010, Democratic officeholders near universally contended that the decision would render egalitarian democracy a quaint and archaic notion. This myopic, evidence-averse philosophy even compelled Harvard University Professor Lawrence Lessig to virtually abandon his chosen profession – a vocation that he disparages as beneath his intellectual faculties – to mount a quixotic bid for the Democratic Party’s presidential nomination with the singular goal of reforming the campaign finance regime.

The left’s phobia toward money in politics is based in faith. It is impervious to contrary evidence, like that which materialized over the summer as Governors Rick Perry and Scott Walker were compelled to unceremoniously quit the race. Both of these once celebrated figures within the GOP suspended their campaigns despite the fact that their bids were buttressed by prosperous and loyal political action committees.

“Super PACs, Mr. Walker learned, cannot pay rent, phone bills, salaries, airfares or ballot access fees,” the New York Times reported. “They are not entitled to the preferential rates on advertising that federal law grants candidates, forcing them to pay far more money than candidates must for the same television and radio time.” Most important, and to the likely astonishment of the Lessigean left, they also cannot buy a critical mass of support in the polls.

But the fundraising hauls for Walker and Perry PACs pale in comparison to the windfall Jeb Bush’s campaign reported in the early summer. In the first half of the year, Bush donors sunk $103 million into his super PAC. “This base provides a huge advantage in further fundraising, media exposure, voter outreach, polling day mobilization and vital influential endorsements,” wrote University of Denver Professor Jonathan Adelman. “In America, campaign money doesn’t merely talk, it screams ­­and nowhere more than in political campaigns.” He made the prediction that Bush would be the Republican nominee even before the candidate’s second quarter fundraising disclosure, which is indicative of his unflappable faith in the power of money to dictate outcomes.

And who knows? Maybe the muscle of well-placed ad buys will decide the Republican presidential primary race. After all, the spending season is only just beginning. On Monday, Bush’s campaign announced its intention to reserve television and radio advertising time in Iowa, New Hampshire, and South Carolina to the tune of $1 million, $4.6 million, and $2.2 million respectively. “Our campaign will have the resources needed to be competitive throughout the calendar, ensuring Governor Bush is the nominee,” read a statement released by campaign spokeswoman Kristy Campbell.

But will it? As it becomes clear that the exclamation point that follows “Jeb” in the candidate’s logo is an unconvincing contrivance, Bush donors are getting nervous. Polls of the GOP electorate are notoriously unreliable and have been especially volatile, but the trajectory of Bush’s support is moving in only one direction: downward. An NBC News/Wall Street Journal poll released in mid-July found Bush leading the field with 22 percent support. Today, NBC/WSJ pegs Bush’s support at just 7 percent. In that survey, he trails four candidates, and at least one of them – Senator Marco Rubio – is as appealing to establishmentarian Republicans as is the former Florida governor.

As Politico reported on Tuesday, the Bush campaign has been directing its donors, who look at the candidate’s imploding standing in the polls and shudder, to instead survey the prediction markets that have for months steadily indicated that Bush would eventually emerge the party’s nominee. “Just one problem,” Politico revealed. “Beginning Sunday night, PredictIt, the biggest of the online sites and the one referenced last week by top Bush advisers and confidants, placed Marco Rubio ahead of Bush at the head of the GOP pack.”

His top bundlers, summoned to Miami for a last-minute call-a-thon, are working hard to convince increasingly anxious donors of their candidate’s strength. Bush’s team is highlighting the benefits of its sizable financial advantage — mainly, a top-notch national organization — in an effort to focus attention on the campaign’s durability but also to demonstrate its superiority in relation to Marco Rubio, whose rise in recent polls represents a growing threat.

Campaigns matter and Jeb Bush has run a disappointing one. Bush entered the race ill-advisedly attacking the very conservatives whose support he would need to win the nomination. His assertion that he would have to “lose the primary to win the general” was an oblique jab at those GOP voters who he believed had rendered Mitt Romney unelectable amid a process of attrition that became an ideological purity contest. “I used to be a conservative and I watch these debates and I’m wondering,” Bush lamented nearly four years ago.

“On the stump, Bush has stuck to his pledge not to shift to the right to win the nomination, but his middle-of-the-road positions on immigration and education have come off more as out of step with the base of his party than shrewdly pragmatic,” the Washington Post reported in June. “His wonky question-and-answer exchanges with voters sometimes resemble college lectures rather than a disarming appeal for votes.”

As Republican donors grow nervous about Donald Trump’s seemingly intractable position at the top of the polls and with a plethora of candidates fracturing the moderate vote, GOP power-brokers are soon going to coalesce around a single Trump alternative. It will be a positively Shakespearean plot twist if the elder Bush is subjected to requests that he vacate the race in order to make room for his protégé, Rubio. Such an outcome was virtually unthinkable just months ago when Bush’s backers were said to be livid with the junior Florida senator for failing to wait his turn.

None of this is going as planned. The 2016 race is anything but predictable. This was supposed to be the election cycle in which the dominance of high-dollar donors was clearly demonstrated, but that hasn’t happened. This empirical reality has not, however, altered the perception among liberals that big money still controls the political process. Their dogmatism exposes the extent to which this perception has become an unfalsifiable religious conviction. 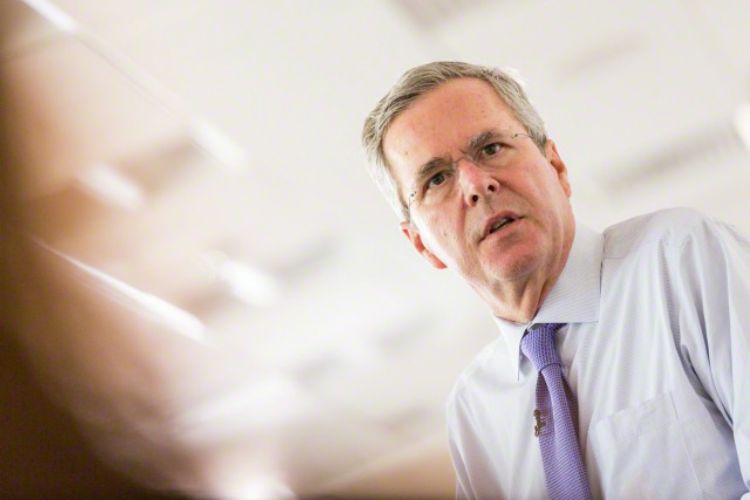