By June 2020, nearly every major American city had become the scene of mass political demonstrations by day and, often, riotous violence by night. Progressive activists descended into a bidding war against themselves, issuing fevered demands for increasingly dramatic reforms to American law and culture. Conservatives and Republicans salivated over the political opportunities presented by civic unrest in Democrat-led urban enclaves coupled with the left’s advocacy for radical revisions to the social compact. And amid all this, Joe Biden did almost nothing.

Politico described the Biden campaign as “less attentive—and sometimes downright dismissive—of certain obsessions of the social media left.” As one Democratic strategist observed, the Biden campaign “won the primary by ignoring all of that”—the “that” here being the “critical race theory-intersectional left,” which enjoys outsize prominence in venues like Twitter.

For the Biden camp, ignoring their uncompromising left flank was a daily ordeal. Through it all, from the primary to the transition period, the left heaped scorn on a Democratic standard-bearer who seemed entirely deaf to their petitions. The threat displays in which this vocal minority engages can be intimidating, and there were days when sticking to the plan probably felt suicidal. The president’s campaign had every reason to be proud of its defiance.

“Biden ran a campaign that is not a Twitter campaign,” Vox.com’s Ezra Klein noted in the wake of the 2020 general election. “Can Biden, as president, ignore Twitter controversies and try to hold marginal voters when the focus is on him and his actions?” Good question. The answer, it seems, is no.

As America breathed a sigh of relief when the verdict reached in the trial of former Minneapolis police officer Derek Chauvin confirmed the appalling lawlessness of those infamous nine minutes and twenty-nine seconds, the left was already agitating for more social unrest. And as John Podhoretz observed, progressives who had implored the world to believe the truth of their own eyes in the Chauvin case were now asking America to disregard the evidence before them in favor of an insultingly absurd narrative.

In Cleveland, Ohio, a police officer’s body-cam footage showed 16-year-old Ma’Khia Bryant charging at another teenager while wielding a knife. Bryant pinned her peer up against a car and wound back her arm before lunging at her intended victim when the officer shot her to death. The whole episode unfolded in just nine seconds, and the footage appears to justify the use of lethal force. At the very least, it is enough for us to reserve judgment ahead of an investigation. But the left did not reserve judgment—not on Twitter, at least.

“A Black teenage girl named Ma’Khia Bryant was killed because a police officer immediately decided to shoot her multiple times in order to break up a knife fight,” Barack Obama’s senior political adviser Valerie Jarrett wrote, presumably, with contempt. “Demand accountability. Fight for justice.” She wasn’t alone. “The officer who killed Ma’Khia Bryant literally brought a gun to a knife fight & people still blame her?” marveled the writer Jill Filipovic. “This isn’t about one officer,” NBA star LeBron James explained after posting a photo of the responding officer captioned “you’re next.” “It’s about the entire system and they always use our words to create more racism,” he added. “Stop killing us and our babies,” wrote progressive Rep. Cori Bush. “Ma’Khia Bryant was a child,” the poet Amanda Gorman protested. “A child. A child.”

The narrative being promulgated here is utterly detached from anything empirical. Bryant’s intended victim was “a child,” too, and she is alive today due to the split-second actions of that officer. There was no “knife fight” because that would involve more than one armed assailant. And even if there was a “knife fight,” intervening in that kind of lawless display is within law enforcement’s remit.

It should have been easy enough to ignore this Internet-based monomania, but the Biden White House didn’t ignore it. They lent it credence. “She was a child,” said White House Press Sec. Jen Psaki in a prepared statement. “We know that police violence disproportionately impacts black and Latino people in communities and that black women and girls, like black men and boys, experience higher rates of police violence.”

Thus, the White House added fuel to a fire that once again threatens to engulf American cities. And save for their fear of contradicting a lie preferred by the very online left, it’s hard to see why.

This isn’t the first time the Biden administration has shot from the hip in service to the dubious narratives advanced by a reliably indiscreet cast of Internet activists.

“What I’m worried about is how un-American this whole initiative is,” Joe Biden said of Georgia’s “sick” restrictions on accessing the polls, which he said capped voting hours “at five o’clock when working people are just getting off work.” After all, that’s what the activist class was saying of Georgia’s voting law, and Biden seemed to consciously mimic their pique when he deemed the law “Jim Crow in the 21st Century.” But the law did not cap voting hours—it allowed counties to extend them well beyond working hours, and it expanded early voting hours beyond those allowed in even many Northeastern states.

Nevertheless, the president forged ahead with his misapprehension, going so far as to leverage his powers to compel Major League Baseball to withdraw the All-Star game from Georgia in protest. But it didn’t take long before the backlash materialized. MLB officials warned in print against allowing a dubious political narrative to transform the game into “a weapon in the culture wars,” and told reporters that they were “blindsided” by the commissioner’s move. And Georgia’s Democrats were mortified by the exodus of baseball-related economic activity from their diverse battleground state to the more monochromatic Colorado.

Biden caved to similar pressure from his left flank after he made the mistake of calling the ongoing U.S.-Mexico border crisis a “crisis.” This accurate description of a situation in which a flood of migrants greater than anything seen in 20 years overwhelms border patrol officials and has necessitated National Guard deployments incensed the activist left. They insisted that this was a seasonal influx, which makes it something less than a crisis. Moreover, the word “crisis” fails to “acknowledge the very basic legality of seeking asylum, and instead focuses on how the border should not be a place where people can seek asylum.”

With this blowback in mind, the White House insisted that the president didn’t mean it when he said there was a “crisis” on the border. Rather, there is a “crisis in Central America.”

Fear not. Biden hasn’t lost control of the reins of his administration. He’s caving to pressure all on his own.

This week, progressives savaged the president over his failure to lift a Trump-era cap on the number of refugees the country will accommodate and resettle, though Biden’s reluctance was predicated on legitimate administrative concerns. The “sharp increase” in migrants at the border, the Washington Post reported, had put severe strain on the agencies responsible for their care and resettlement. Not good enough, the online left and their allies insisted. Biden’s reluctance represented an abrogation of “our values,” and a continuation of “xenophobic and racist” Trump-era policies, they shouted. Under pressure, and despite two months of carefully studying the migration conundrum, Biden swiftly relented and lifted those caps.

To hear Biden’s allies tell it, their determined efforts to avoid catering to the mania and maximalism of online progressivism contributed in no small part to the president’s 2020 victories. The White House may come to regret its apparent decision to give up on that successful strategy. 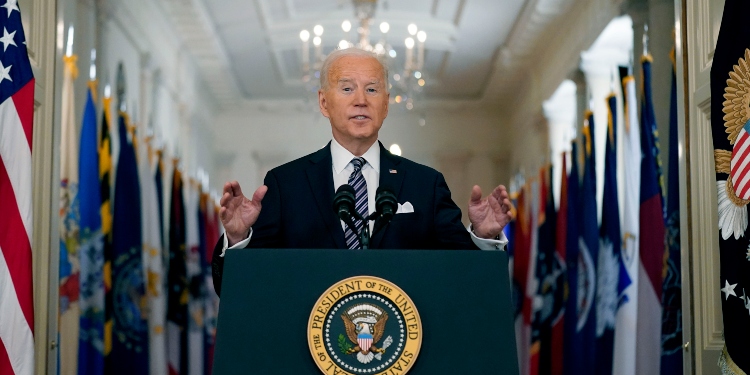