President Joe Biden will be the first to remind you that he has had a long career in politics. He did so once again last night during a televised town hall in Milwaukee broadcast on CNN. But despite that experience, Biden claimed, something entirely unforeseen has occurred: For “the first time in my career,” the president said, “there is a consensus among economists left, right, and center,” that, “in order to grow the economy a year, two, three, and four down the line, we can’t spend too much.”

There is no dissent. At least, there is no “serious” dissent. This sleight of hand manages to transform the word “consensus” into something more closely resembling “shut up.”

Biden managed to apply this trick both to his preference for a nearly $2 trillion COVID relief bill and his desire to see Congress pass a federal minimum wage hike. When pressed by an audience member who insisted that a federal mandate to boost payroll costs could force his and other businesses to close, Biden insisted that the “vast majority” of economists believe the impact on businesses from a phased minimum-wage increase would be “de minimis.” Of course, CNN host Anderson Cooper reminded him, no less a source than the Congressional Budget Office believes that such a maneuver would cost at least 1.4 million people their jobs. “Yes,” Biden shot back, but “if you read that whole thing about Pinocchios and all the rest, there are also equal number of studies say that’s not—that it wouldn’t have that effect.”

We can only assume by invoking “Pinocchios” the president is accusing the CBO of being less than truthful. That is, if we assume that he’s referring to the Washington Post’s fact-checking team, which uses Pinocchios as a metric to evaluate relative truthfulness. It’s unclear what Biden is specifically referring to, but the Post did evaluate the president’s claim earlier this month that “all the economics show” that if you raise the minimum wage, “the whole economy rises.” Washington Post fact-checker Glenn Kessler determined that Biden’s assertion that there is near “universal consensus” among economists in favor of his economic preferences deserved “Two Pinocchios.” Perhaps the president is confused.

The president’s claim that economists agree that there are almost downsides to passing the largest single spending bill in American history is similarly mendacious.

Larry Summers, for example, is a serious guy. As the former Clinton administration Treasury Department official and the President of Development Economics and Chief Economist at the World Bank, he should be. Summers has warned that the risk of such a dramatic influx of capital into the economy would be to invite runaway inflation—a sobering prospect given the profound political instability that follows when the money in your wallet doesn’t have the same value that it did yesterday. Olivier Blanchard, a former chair of the economics department at MIT, agrees with Summers. “This would not be overheating,” he said of the proposed COVID relief package, “it would be starting a fire.” Some, including former members of Barack Obama’s Council of Economic Advisers, have recommended legislative triggers in the relief bill that would close off additional spending if the economic recovery beings to pick up steam.

According to Joe Biden, “most economists” believe that this relief bill will produce “7 million jobs this year.” In the absence of a new relief package, we can only assume that Biden believes those jobs would not materialize. But when Goldman Sachs economists Joseph Briggs and David Choi examined the findings of the Census Household Pulse Survey last year, they found that a significant number of American workers withdrew from the workforce as a result of the pandemic in order to provide care for children no longer in school—a condition that would abate the minute schools opened again full-time. How many workers, you ask? “About 7 million.”

Moreover, the extended unemployment insurance provisions within this new relief bill, though well-intended, “may slow that recovery,” according to a December 2020 Bureau of Labor Statistics report. “Using occupation-level data on job separation and new job finding rates calculated from the CPS, [Federal Reserve Bank of San Francisco Vice President of Macroeconomic Research] Nicolas Petrosky-Nadeau estimates a similar model and finds that temporarily high UI benefits would outweigh the long-term value of steady employment only for workers in the lowest paid occupations,” the report read. Why? According to a model produced by economists Yusuf Mercan, Benjamin Schoefer, and Petr Sedlacek, deep recessions result in many applicants for few, often lower-paying jobs. “Their model helps explain both the slow recovery of overall employment and the ‘scarring’ effect of lower long term earnings which typically occurs after deep recessions,” the BLS report reads.

Finally, among Joe Biden’s favorite myths—one that has become an almost religious conviction on the left—is that the primary risk to the U.S. economy would be to repeat the mistake of 2009. What was at the time the largest spending bill in American history—the nearly $800 billion “stimulus”—was simply too small. “It ended up working,” Biden insisted, but “we thought we needed more.” There’s no need to relitigate the history of the American Recovery and Reinvestment Act. Suffice it to say, there are plenty of economists who contend that the stimulus did not have a statistically significant effect on employment, even when evaluating the legislation’s performance based on the measurable metrics such as “jobs created” and nebulous concepts like “jobs saved.” There is disagreement on this, but the fact that disagreement exists is the point.

The idea that there is consensus around Joe Biden’s preferred policies in this or any other academic field exposes a deliberate intention to misinterpret data for political gain. To put this in terms that progressive activists would understand, Joe Biden’s erasure of dissenting economists is “minoritizing” them—literally doing violence to them, their careers, and their profession. Hopefully, if we must once again learn that those shovel-ready jobs were “not as shovel-ready as we expected,” Biden will have the grace to correct the record. 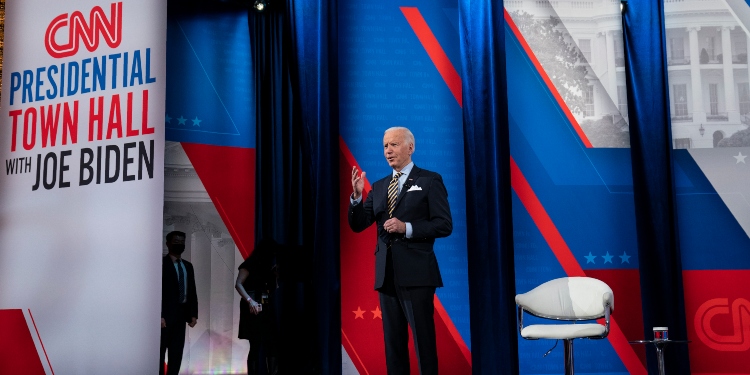