From one extreme end of the political spectrum to the other, John Bolton’s departure from the Trump White House was seen as cause for celebration. Vox.com proprietor Ezra Klein confessed that “the best thing about Donald Trump is that he seems instinctually skeptical of going to war.” In the liberal pundit’s estimation, Trump’s “firing of Bolton is a rare bright spot in his presidency.” Power projection skeptic Sen. Rand Paul agreed. “President @realDonaldTrump hears all your NeverTrump warmongering,” Paul tweeted at House Republican Conference Chair Rep. Liz Cheney. “We all see your pro-Bolton blather. I’m just grateful for a president who, unlike you, supports stopping these endless wars.”

John Bolton’s record as a prominent advocate in favor of American power projection over his past two decades in public life is the assumed basis for these displays of triumphalism from his critics, but what about his record in this White House? If Bolton’s detractors were so honestly dismayed by his performance as Trump’s national security adviser, you might expect to hear some specific criticisms of it.

When Bolton resigned, Donald Trump was still receiving strong criticism over his plan to invite members of the Taliban to Camp David for the signing of a peace deal even as Taliban-affiliated forces were attacking U.S. interests and killing American service personnel in Afghanistan. According to Bloomberg’s reporting, Bolton argued against the peace deal, claimed that the terms were “too vague,” and convinced Trump of the political risks should the Taliban be negotiating in bad faith (a reasonable hypothesis). NBC News added that Bolton joined Vice President Mike Pence in helping persuade Trump to abandon the boneheaded plan to bring the Taliban to U.S. soil just days before the anniversary of the September 11th attacks. Bolton’s instincts on this one were not just strategically but politically sound and advantageous for this president and the country he leads. Bolton’s critics can’t be too terribly frustrated by this episode. It must be something else.

According to reporting from CNN and the New York Times, the president soured on his national security adviser when he declined to appear on national television to defend Trump’s decision to advocate on Vladimir Putin’s behalf in Russia’s bid to rejoin the group of highly industrialized nations. “It would be a good thing if Russia was there,” Trump said on his way to the G7 summit in Europe, adding the non sequitur that Putin had “made a living outsmarting President Obama.” Perhaps Paul and other libertarian skeptics of America’s international engagements welcome Russia’s readmittance to that and other international organizations despite Moscow’s continued occupation of Ukrainian territory. It’s unlikely, though, that most of Bolton’s prominent left-wing critics do, too. So, that cannot be it either.

“I disagreed with John Bolton on his attitudes on Venezuela,” Trump told reporters in the Oval Office this week. “I thought he was way out of line.” What does that mean, exactly? Who knows? One unnamed White House official told McClatchy reporters that Trump was irritated when Bolton raised the prospect of military contingency operations in Venezuela (an option any American president should entertain if the Venezuelan state were to fail), but Trump himself insists that “my views on Venezuela, and especially Cuba, were far stronger than those of John Bolton.” Trump’s frustration with the failure of Nicolas Maduro’s regime to crumble with politically beneficial expediency is understandable. But what other option was available to this administration but to endorse (along with the rest of the Western world) the lawful devolution of constitutional authority from that regime to National Assembly leader Juan Guaidó? Would Bolton’s critics prefer it if the United States joined with regimes in Moscow, Beijing, and Havana in support of Maduro? Doubtlessly not.

“I don’t blame Kim Jong Un,” the president added when asked about the North Korean despot’s antipathy toward his ousted national security adviser. Trump added that Bolton’s insistence that Kim should follow “the Libyan model” and pursue disarmament in exchange for reintegration into the international environment was deeply unhelpful. Flippant observers are quick to insist that any reference Libya’s recent history is a nonstarter for savvy despotic regimes. After all, Muammar Gaddafi’s reign (and life) ended with an Arab Spring revolution that the U.S. supported from the air. But the “Libyan model” refers to Gaddafi’s peaceful disarmament in exchange for financial and diplomatic rewards. What other model is there to disarm a rogue state save for military intervention? Do Bolton’s critics know of some other model? At most, they might contend that Bolton’s comments were undiplomatic, but they cannot claim that they were wrong. What’s more, the appearance of an American president giving North Korea’s duplicitous potentate a veto over his staffing decisions is too sordid to countenance.

If Bolton has any record of “warmongering” in this White House, it is regarding Iran. Bolton did advocate for a retaliatory strike against Iranian command and control targets after Tehran took credit for a successful attack on a U.S. drone monitoring the Strait of Hormuz—a strike Trump approved only to lose his nerve at the last minute. “John Bolton left because Trump wouldn’t let him start a war,” reads the frivolously impertinent Vox headline. Fine. If that’s the position of Bolton’s critics, that the United States should not monitor a strategic international waterway subject to regular Iranian piracy and that it should not respond when it is directly and brazenly attacked, that’s certainly an outlook. But it’s not a serious one, and God help us if that strategic vision is ever shared by an American president. You’ve not yet heard one of Bolton’s critics articulate this point of view in such a straightforward fashion because it is objectively absurd, but it would substantiate their opposition to his otherwise commendable record in this administration.

Today, Bolton’s critics are flush with renewed hope for a thaw in relations with Iran akin to the Obama years, when Tehran was taking American sailors hostage and funding the export of terrorism across the Middle East. Maybe they will get their wish. If they do, they will have made a better case for John Bolton’s tenure in the White House than any foreign-policy hawk. 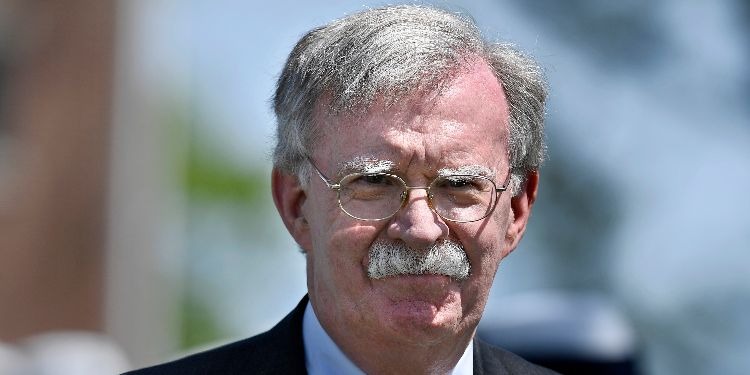