This week, a slew of reporters added their names to an open letter calling for an end to their profession.

They don’t frame their demands that way, of course, but that would be the practical effect of their recommendations. The many high-powered journalists who signed on to this petition—some of whom are household names, while others preferred to remain anonymous and merely implicate their employers in this scheme—have demanded that news media embrace and disseminate “a narrative.” That “narrative” is an elementarily didactic tale in which “Israel’s systematic oppression of Palestinians is overwhelming,” a fact that “must no longer be sanitized.” Theirs is a romantic fable in which Israel is powerful, the Palestinians are powerless, and journalism’s role should be to promote this tale not just to inform but to get results.

The first problem with this mission statement is that it is predicated on a series of falsehoods. These reporters affirm that it is an indisputable fact that Israel’s conduct constitutes “apartheid, persecution, ethnic supremacy” because these terms are “gaining institutional recognition”—the “many people are saying” standard of veracity. They base this assertion on a risible claim made by Human Rights Watch that Israel oversees an “apartheid” regime akin to South Africa’s. That would probably surprise the Arab minority in Israel, which enjoys the same rights as any Israeli citizen, has representation in the Knesset, and is organized to such an extent that it will make or break the incoming government. It is no stretch to contend that Israeli Arabs are the freest Arabs in the Middle East, as evinced by these journalist’s second contention: media has failed to propagandize the property dispute in an East Jerusalem neighborhood that supposedly precipitated the conflict that erupted in May.

“Media outlets often refer to forced displacement of Palestinians living there — illegal under international law and potentially a war crime — as ‘evictions.’” They claim that it is a falsehood to contend that this is a mere “dispute” between a landlord and a tenant in the East Jerusalem neighborhood of Sheikh Jarrah. But that’s precisely what this is: the quotidian and impartial adjudication of a dispute between private parties.

The legal conflict between Jewish owners who claim a chain of documented title over one piece of property going back to 1875 and its Arab occupants who’ve resided there since Israeli independence in 1948, when the property was ceded to them by Jordan, has been working its way through Israel’s independent judiciary for four decades. The nation’s Supreme Court was set to reach a verdict on the matter but halted proceedings when violence erupted in the streets—not over any eviction because no eviction had occurred, but over the very prospect of justice.

Maintaining the fiction that Jerusalem was seeking to “Judaize primarily Palestinian neighborhoods,” as the left-wing outfit J Street contemptibly put it, is crucial to the “narrative.” It inserts the Israeli government into affairs that it wasn’t involved in, and it suggests that the street fighting that erupted last month in advance of a verdict, in this case, was entirely organic. It was not.

On April 30, Palestinian Authority leader Mahmoud Abbas “indefinitely delayed” Palestinian parliamentary elections scheduled for May 22 because his Fatah Party was almost sure to lose them to Hamas—the terrorist group that controls the Gaza Strip. On May 8, the Fatah Movement Central Committee called for an “uprising” to “raise the level of confrontation,” and violence exploded. Not to be outdone, Hamas took the opportunity to mount a massive volley of indiscriminate rocket fire against Israeli civilian targets. But Hamas wasn’t sending a message to Israel. The intended audience was Palestinians in the West Bank.

The almost total lack of curiosity in the press over the sequence of events that resulted in May’s 11-day conflict is an abrogation of the press’s responsibility to its audience. But that abrogation is exactly what these reporters want. The activist journalists who signed this letter seem to believe that the credulous repetition of a simpler narrative—just another uprising against oppressive Israelis—is best practice.

This leads us to yet another ponderous assertion made by these self-described journalists: Western journalism tends “to disproportionately amplify Israeli narratives while suppressing Palestinian ones.” As evidence for this staggeringly blinkered claim, they cite media’s efforts to fact-check Israeli politicians (which proves the opposite of the point they’re trying to make), and the way news media was deliberately misled by Israeli statements and troop movements to indicate that a ground invasion of Gaza was imminent. That was a deliberate deception designed to move Hamas terrorists into underground tunnels where they could be neutralized without a costly and inflammatory invasion. But, yes, the media was misdirected in wartime for strategic purposes. Hardly a historical first and in no way the result of pro-Israeli bias. These reporters were merely relating to readers what were witnessing firsthand.

The very notion that the news media is somehow unable to “accurately reflect the plight of the Palestinians” is so solipsistic that one has to wonder what reality these reporters inhabit. The Palestinian territories and  East Jerusalem are routinely described in the press as “occupied,” though that’s oversimplified to the point of being misleading. In Gaza, every Jew was forcibly relocated by the Israeli government in 2005, and much of the territory presently under “occupation” would be ceded to Israel according to the terms of the many proposed resolutions to this conflict. The American press frames military offensives by Hamas as a response to American diplomatic overtures to Israel, such as moving the U.S. embassy to Israel’s political capital, which ignores the conspicuous failure of the Fatah-led West Bank to similarly erupt. We are routinely treated to soft-focus profiles of the long-suffering Palestinian people who languish under oppressive regimes that devote more of their money and energy to making war against Israel than serving their people. And yet, the villain of this rather straightforward story is always the same and almost never the true malefactor.

Indeed, the hunger to promote Palestinian narratives is so all-consuming in the press that they seem willing to fall for anything. At the end of the conflict in May, Sarah Leah Whitson, a veteran of the group Human Rights Watch, which produced the odious “apartheid” report, publicized a claim alleging that an “Israeli pilot revealed that the destruction of residential towers in #Gaza Strip was ‘a way to vent the army’s frustration.’” This admission of a war crime was promoted breathlessly, including by some whose names grace this open letter. The notion that the strategic planners and IDF attorneys who select targets were overruled in the air by overzealous pilots would be shocking, and surely the IDF’s MAG Corps’ General Staff Mechanism for Fact-Finding Assessments will be outraged by this development. Either that, or this never happened, and it could only be believed by those with a burning prejudice against Israel that precludes the potential for anything resembling rational thought.

But perhaps rationality has been subordinated to emotion. After all, as Vox.com reported, progressives in government and the press have come to view the Palestinian cause as an extension of the Black Lives Matter movement. They use BLM’s campaign against police violence as a heuristic to navigate a conflict they don’t understand and which they don’t seem to want to understand. Rather, they want it to comport with a childishly simplistic, Marxist-flavored narrative about how power dynamics explain the world.

Call that what you will, but you can’t call it reporting. What these alleged journalists want isn’t journalism. They are on a “sacred” mission to promote “contextualized truth.” Another way to say “contextualized truth” is “lie.” It even makes for pithier copy, which is what real reporters strive to produce. 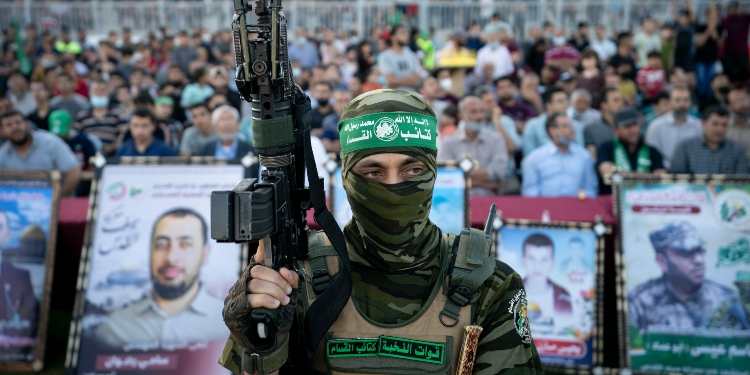