When Wikileaks founder Julian Assange went into hiding in Ecuador’s London embassy in 2012, after publishing classified American intelligence stolen by a U.S. Army private later convicted of espionage, he did so as a hero to anti-secrecy activists. In exile, Assange repurposed his organization into a clearinghouse for laundered intelligence obtained via Russian intelligence services, and his reputation became much diminished among his former boosters. So, when Ecuador’s hospitality was finally exhausted on Thursday and British police literally dragged Assange toward a long-delayed rendezvous with justice, the Wikileaks founder couldn’t count on much overt support. And yet, the concern for Assange and his nihilistic mission wasn’t that hard to find. You just had to look for it behind veiled concerns for the supposed threat his arrest posed to “press freedom.”

Even before a statement from British police revealed that Assange had been taken into custody “on behalf of United States authorities,” and the Department of Justice had released an indictment detailing the charges Assange would face upon extradition, the Wikileaks chief’s sympathizers complained of the chilling effect his detention would have on the conduct of journalism.

Reporters Without Borders Secretary General Christophe Deloire warned that Assange’s arrest “would be a punitive measure and would set a dangerous precedent for journalists.” A widely recirculated column from Columbia Journalism Review’s Mathew Ingram speculated that, because the Obama Justice Department declined to indict Assange, a Trump DOJ indictment would likely infringe upon journalists’ constitutional protections. “[P]rosectuing a foreign publisher for violating U.S. secrecy laws would set an especially dangerous precedent for U.S. journalists,” the ACLU’s statement. “First Amendment protects the freedom to publish,” The Daily Beast’s national editor, Justin Miller, opined. “Otherwise, the government decides who is a journalist, which means who deserves protection and who doesn’t. Down that road lies tyranny.”

But the Justice Department’s indictment alleged that Assange hadn’t simply published the information Pvt. Bradley (now Chelsea) Manning illegally pilfered without properly redacting it to protect the lives of innocents or preserve U.S. national-security interests. He had actively conspired with Manning to secure that information. “Assange agreed to assist Manning in cracking a password stored on United States Department of Defense computers connected to the Secret Internet Protocol Network, a United States government network used for classified documents and communications,” the DOJ indictment read.

Quite simply, conspiring to hack into American intelligence systems to expose state secrets is not what journalists do.

Even after the Justice Department’s indictment revealed that Assange and company were not being persecuted for their reportorial curiosity, the usual suspects continued to rend garments. “This is [a] huge attack on press freedom,” wrote Glenn Greenwald, directly citing the DOJ’s indictment. “The arrest of #JulianAssange is meant to send a message to all Americans and journalists,” wrote 2020 presidential candidate and Bashar al-Assad confidante Rep. Tulsi Gabbard, “be quiet, behave, toe the line. Or you will pay the price.” Hardly.

The Department of Justice’s guidelines governing what journalistic practices can and cannot be prosecuted are relatively straightforward, and they contain some glaring exemptions. For example, individuals who are believed to be “aiding, abetting, or conspiring in illegal activity with a person or organization” is likely to find themselves in the DOJ’s crosshairs.

The DOJ’s indictment doesn’t focus on the information Wikileaks published but rather how the documents were obtained. The indictment does have some troubling elements—notably, the notion that Assange “encouraged” Manning to hand over all the intelligence to which he was privy—a claim that could reasonably apply to any number of journalistic practices. But the DOJ’s central allegation,  that Assange helped crack a Defense Department password so Manning could secure as many classified documents as possible, is beyond the remit of any journalist. That is the conduct of a hostile intelligence agency.

Though it may not be prosecutable, it is dispiriting to see so many journalistic watchdogs looked beyond what Assange’s organization published simply to defend its right to publish. The documents Wikileaks revealed often contained information of almost no journalistic value but which had substantial worth to America’s adversaries. It’s unclear what blows for freedom were struck when Assange published information in 2008 detailing how the U.S. Army jammed the signals meant to detonate improvised explosive devices, potentially allowing America’s adversaries to defeat that system. Nor is the journalistic merit associated with exposing the names of America’s Afghan and Iraqi informants immediately apparent, though it’s quite clear what kind of value that information represented to opponents of America’s war effort.

This was not transparency. It was sabotage.

Journalists and their advocates would have been better served by keeping their powder dry before advocating on Assange’s behalf, aligning themselves in the process with conduct befitting a counterintelligence operative more so than a reporter. Those who recanted upon reading the Justice Department’s indictment at least acted in good faith. Those who maintain even now that the charges against Assange represent an assault on the First Amendment have not. 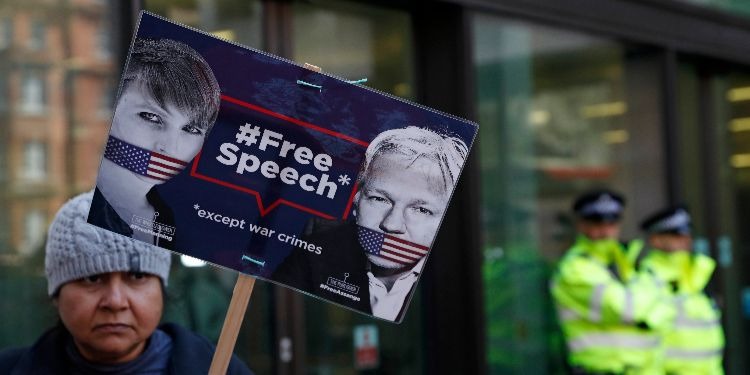