Joe Biden’s decision to draft Senator Kamala Harris into the presidential race has been hailed as a tactically deft maneuver. She represents a portion of the Democratic electorate—one that is overrepresented in the press—that has struggled to find any enthusiasm for Biden. But while Harris brings a lot to the Democratic table, what she seems to lack is any capacity for strategic planning. As her time in the national spotlight has demonstrated, Harris’s ability to mount a sustained and effective campaign against her chosen targets is woefully inadequate.

Take, for example, the “moment” Harris had during Brett Kavanaugh’s confirmation hearings. Clips of the California senator’s performance went viral after she grilled the Supreme Court nominee over a meeting she alleged that he had taken with “President Trump’s personal lawyer.” Harris’s allegation was dripping with implication, and just vague enough to allow Americans who were hostile toward Kavanaugh to assume the worst.

It was a masterful moment—or, so we were told. Harris’s “background as a seasoned prosecutor was on full display.” She had suddenly become the leader of the “Democratic revolt.” As one influential Ohio Democratic organizer confessed, “That’s when I started to hear people really talk about what a badass she is.” But Harris had no follow up. She produced no confirmation that any meeting actually occurred and no proof of or even speculation as to what might have been discussed. It was a non-sequitur that served only to satisfy the senator’s desire for camera time.

Or take Harris’s presidential campaign. The rollout of the senator’s candidacy was nearly flawless, and it was well-received in the press. And then, she sat down with CNN host Jake Tapper for a town hall during which she was asked to expand on her years-long advocacy for a single-payer-style health-care system in America and, specifically, her co-sponsorship of Bernie Sanders’s Medicare-for-all bill. It was a disaster.

“Let’s eliminate all of that,” she said of the private-health-insurance industry. “Let’s move on.” Her flippant remark, delivered laughingly, suggests she wasn’t aware of how poisonous this provision was. What followed was a scandal that engulfed her candidacy for several news cycles. Though a number of senators had sponsored Sanders’s bill, Senate Democrats used the opportunity to attack Harris for lurching too far to the left. Ultimately, an adviser close to Harris conceded that the uproar had gotten to her. Suddenly, the senator was now “open to the more moderate health-reform plans, which would preserve the industry.”

Then there was the infamous attack on Joe Biden. Harris entered the summer of 2019 a favorite but not the frontrunner, and she trained her fire on Biden early. Her attack—one that had been bouncing around center-left media for some time—was that Barack Obama’s former vice president was far too comfortable with racists and racially antagonistic public policy. So Harris brought this grievance to the debate stage, accusing Biden of working with segregationist Democrats during his nearly four decades in the Senate and of opposing forced busing (an unpopular policy that failed on its own merits and arguably increased racial tension where it was implemented).

Implicit in Harris’s effective attack on Biden was that she was grateful to and supportive of forced busing. But of course, because the policy is neither popular nor effective, she was not. Though she had argued on the debate stage that, when schools are de facto segregated, “that’s where the federal government must step in,” she now insisted that she didn’t endorse a return of busing. But she had just said that the policies Biden supported would have left her unable to go to the school she attended. So, what was the point of that attack? Again, beyond the applause she received in the moment, there wasn’t one.

As Harris’s star faded amid these repeated missteps, she launched one last, ill-fated offensive. Her objective: Get Donald Trump kicked off Twitter.

The total lack of seriousness in this proposal was exposed on yet another Democratic debate stage when Harris turned to Sen. Elizabeth Warren—who was at the time experiencing a bump in key state polling—and demanded that she join the crusade to expurgate Trump from that platform. Warren simply ignored Harris’s premise, demonstrating what a spent force she had become. Once again, there was no follow-through—no parry for when Warren dismissed the notion that this social-media organ should muzzle the president. Instead, Harris smiled uncomfortably into the camera while Warren used the opportunity to promote her various regulatory proposals.

The moment became a coda to Harris’s failed campaign, which folded three weeks before even the first votes were cast. “One adviser said the fixation that some younger staffers have with liberals on Twitter distorted their view of what issues and moments truly mattered,” read the New York Times’ postmortem, “joking that it was not President Trump’s account that should be taken offline, as Ms. Harris has urged, but rather those of their own trigger-happy communications team.”

Democrats are clearly starved for a little star power. Harris will slake that thirst. At least, for a little while. But the senator’s political instincts leave much to be desired. There is no value to a “viral moment” if you have to spend the days that follow it awkwardly explaining yourself. Too often, Harris has shown she is willing to give her audience whatever it wants even at the cost of her political fortunes. It already cost her the nomination. It may cost Joe Biden the presidency. 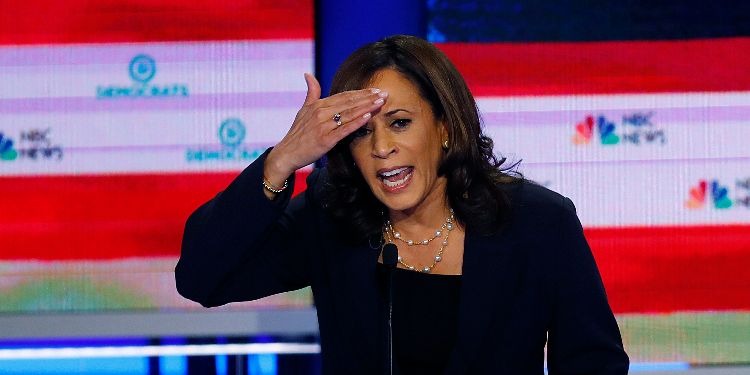