The celebrity candidate at the top of the Republican presidential polls has earned the near universal condemnations he has received from responsible public figures, Democrats and Republicans alike. As Wall Street Journal opinion writer Bret Stephens observed presciently, however, “It takes the demos to make the demagogue.” The sanctimony the left, in particular, has deployed in the process of denouncing Donald Trump’s illiberal, xenophobic instincts reveals an exasperating lack of introspection concerning his appeal. They tell themselves that the nation’s conservative entertainment complex, about the only figures still apologizing for Trump, is the font from which Trump supporters spring. But the candidate could not exist if the conditions that gave rise to his candidacy — the degradation of the international security environment and the public’s eroding sense of security at home — were not as grave as they are. The left’s monumental lack of humility could not be better exemplified than by its collective determination to scold the American people for responding predictably to the circumstances for which they’ve long advocated.

Virtually every one of the 13 other GOP candidates running for the party’s presidential nomination and a variety of local Republican Party chairmen have attacked Donald Trump for his latest asinine, irresponsible, counterproductive suggestion that all Muslim transit into the United States must be curtailed on a temporary yet indefinite basis. For one-quarter to one-third of Republican primary voters, Trump’s logic is especially compelling. They have lost faith in the Republican Party and its groomed candidates just as they have in the nation’s political and governing institutions. All of these, they believe, have failed to meet the challenges of the moment. Drastic measures are now necessary. While the means that Trump supporters have determined might address their righteous grievance is irredeemably flawed, they have every reason to fear for the future.

The international threat environment that the next president will inherit from Barack Obama is objectively a far more dangerous one than that bequeathed to him by George W. Bush. Europe is again at war, and the first cross-border invasion and annexation of territory by another state since 1945 is only a harbinger of things to come. The People’s Republic of China is like never before challenging American sovereignty, both through threat of conventional arms and in the digital theater. The wars that Barack Obama had declared virtually won in his first term now appear to be failures that will continue to embarrass the United States long after he has vacated the Oval Office.

Barack Obama had every opportunity to engage and mitigate the jihadist threat incubating in the vacuum left behind when Bashar al-Assad’s forces were swept from eastern Syria. Instead, Obama’s supporters winced when the president set for himself a “red line” for action in Syria that they knew he would ignore if crossed. That’s precisely what he did. Today, the Syrian crisis has finally drawn in American soldiers, but it is now a conflict characterized by the use of chemical weapons by both Assad’s forces and those of the Islamic State. In Syria, Russian air forces and those of the NATO alliance are coming into conspicuously close contact. This dangerous development even resulted in air combat deaths when a Russian warplane was downed by an American-made air-to-air missile. Democrats would dare to suggest that the public’s rising concerns over these conditions are misguided?

The conflict in Syria that the president allowed to metastasize eventually spilled over the border into Iraq. It was not long afterward that the ISIS plague spread across the Middle East, Central Asia, and North Africa. The ISIS threat has been allowed to evolve for so long that it is now fully capable of exporting terrorism into Europe and North America. Inside the United States, radical Islamist terrorist incidents have proliferated during the Obama presidency. Numerous small-scale incidents of Islamist violence are easy to overlook when tallying the toll exacted in spectacular attacks like those that took place in Fort Hood, Boston, Chattanooga, and San Bernardino. None of these events match the bloodshed that Paris saw last month, but an attack of that scale could only have been achieved with financial and operational links to terrorist safe havens in Syria and Iraq.

The populist, protectionist movement in the United States is a pale shadow of similar movements on the rise in Europe, and both of those phenomena are directly related to the millions of refugees fleeing the nightmares in the Middle East. America does not yet have to endure the kind of refugee crisis that is plaguing Europe. It is a crisis typified by a gruesome and foreboding harvest that includes but is not limited to the bodies of dead children routinely washing up on Mediterranean beaches, the end of the era of borderless travel in Europe, and the rise of ethnoreligious animosities that have a habit of paving the way for genocides. The left is correct to look on these products and recoil in horror, but they are the fruits of their refusal to address crises when they might have been contained.

The human response to the fear of a foreign threat is to dig in, bunker down, barricade the door, and hope for the best. It is a display of remarkable nerve from Democrats, who allowed the barbarians to lay siege to the gates, to castigate those who dare to notice this suboptimal state of affairs. It was the inaction of a Democratic president that gave rise to the fearful populism he now denounces. Those like the editors at the New York Daily News and the Philadelphia Daily News, who think it clever to link Trump to Adolph Hitler, dare not take stock of the incompetent governance for which they cheered and apologized all those many years that gave rise to the populist presidential candidate. 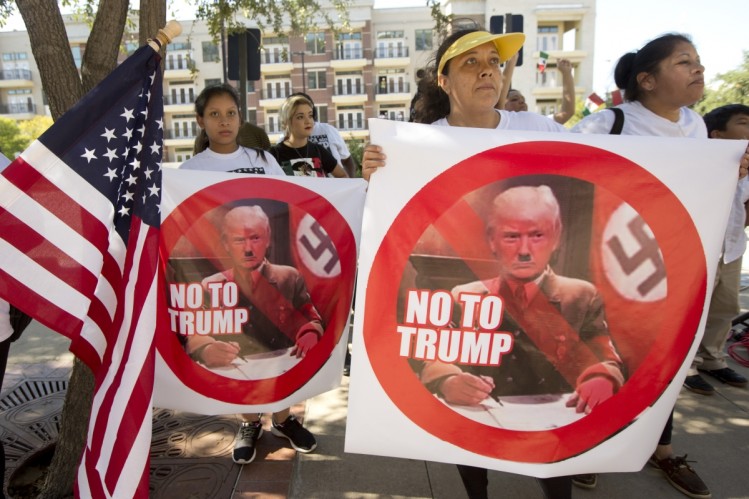