“If Russia, or some other entity, was hacking, why did the White House wait so long to act?” asked President-elect Donald Trump on Thursday morning. He’s hardly alone. This inquiry is on the lips not just of Trump’s allies but his Democratic adversaries. If the Obama administration had been aware of Russian intervention in the election in the form of the pilfering and release of personal Democratic conversations lifted off private servers, why didn’t it act when it might have mattered? The answer is simple: Barack Obama had a legacy to protect, and that legacy was bound up in the Iran nuclear deal.

The notion that Obama didn’t act on the intelligence agency’s confidence that Russian-sponsored actors were behind the hacks of Democratic and Clinton campaign officials is erroneous. He did, but it was not a priority.

In October, the Department of Homeland Security and the Office of the Director of National Intelligence publicly blamed “senior-most officials” in Moscow for the attack. The admission was itself a concession to pressure from Democratic lawmakers like Dianne Feinstein and Adam Schiff to make more of those cyber-attacks.

Despite that, the administration took a low-key approach to the security breach, in part, because its officials were pretty sure Trump would lose and, according to CNN, “they were worried about giving him any reason to question the election results.” They assumed correctly that Trump and his supporters would view the White House’s actions as intervening in the election on Clinton’s behalf, thus tainting the process and giving Trump a reason to dispute the ultimate results.

This is, however, insufficient to explain the White House’s incentive structure. To take any substantive actions in response to Russian hacking would be to imperil the Iran nuclear accords and, thus, Barack Obama’s most significant legacy achievement on the world stage.

The hacking of Clinton campaign chairman John Podesta’s server occurred in March 2016. Three months later, in June, the DNC was targeted by hackers with what private security firms confirmed at the time were links to the Russian government. By July, when the documents recovered from those hacks were released by WikiLeaks, Democrats and the press were celebrating the success of the Iran nuclear deal on its first birthday.

Without Moscow’s cooperation, there would have been no supposed triumph to celebrate.

By July, Russia was working with Iran on practical matters related to Tehran’s end of the bargain. Moscow was helping to convert the hardened, underground enrichment facility at Fordow into a production facility for medical isotopes and preparing to receive Iranian shipments of low-enriched uranium. The White House also feared in July that congressional Republicans could make life difficult for the White House by blocking the Energy Department from purchasing Iranian heavy water, thereby forcing Iran to offer the profitable opportunity to Moscow.

The Russian-Iranian nexus extends to the Syrian conflict, too. Barack Obama informed the nation in a prime-time address on September 10, 2013, that Russia had been invited to mediate the conflict in Syria, oversee the removal of Assad’s chemical weapons stockpiles, and prevent Western intervention in the civil war. What a deal. In the end, Assad maintained and still uses his chemical stockpiles, and Western military action in Syria was merely postponed. Routinely, Secretary of State John Kerry leaned on Moscow to negotiate ceasefires in the conflict only to watch Russia facilitate their violation or violate them directly. The last and most hopeful of these was dashed in September after Russian warplanes destroyed a United Nations aid convoy bound for the besieged city of Aleppo.

In the absence of the Iran deal, this would have rendered Russia a pariah state. As European Council on Foreign Relations analysts Ellie Geranmayeh and Kadri Liik note, Russia’s only meaningful means of engaging with the global diplomatic community after its seizure of Crimea was over the nuclear accords. From the “reset” just months after the invasion of Georgia to the DNC hacks, Moscow has leveraged Obama’s reliance on Russia’s role in the Iran nuclear accords to escape isolation.

Democrats are right to be incensed over Russia’s brazen and intervention in American politics. Their anger is, in part, directionless because their partisan instincts require them to misdirect their ire. The Obama administration’s misguided efforts to reshape the strategic balance in the Middle East is responsible for its current undeserved status as geopolitical kingmaker. 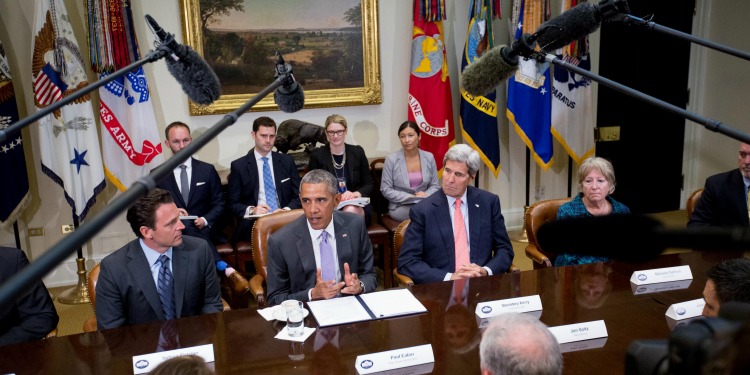