Writing in COMMENTARY, the columnist Ben Domenech recently identified a curious phenomenon.  American political actors on the left, he observed, are engaged in a morally hazardous effort to rehabilitate socialism. “The return of socialism has been significantly aided by the academy, where groups of elite-left teachers and bureaucrats of [Senator Bernie] Sanders’s generation who never soured on the ideology have raised up a Millennial generation with no knowledge of the horrors perpetrated by the real-world workings of the ideology,” He wrote. Surely, all the opprobrium in the universe should come down around the shoulders of a generation too self-absorbed to educate themselves about the unspeakable crimes statism has inflicted upon the world over the decades. Socialism-friendly young adults are, however, but passive accomplices in the ethically dubious campaign to raise Karl Marx from an ignominious grave. Domenech correctly ascribed true guilt to their elders. Disturbingly, the task of normalizing tyrannical socialism is a project that has migrated from the faculty lounge to the presidential debate stage. Within the span of 24 hours, in equally reprehensible violations of every classically liberal norm for which America stands, two prominent “outsider” presidential candidates took to national television to rehabilitate and legitimize thuggish and authoritarian communist regimes.

It should not surprise anyone that a man who thought the Soviet Union was the perfect honeymoon destination would bend over backwards to defend authoritarianism. Still, some of us wide-eyed types with a romantic attachment to the ideals of the founding expect more from a presidential candidate than what Vermont Senator Bernie Sanders is offering the increasingly desperate anti-Hillary Clinton wing of the Democratic Party.

On Wednesday, Sanders was confronted with his own obsequious praise for the repressive communism practiced in Cuba. Univision’s anchors asked how he might atone to Florida’s voters for those comments. Many South Floridians remember life under communism — the real thing; not the Potemkin facades with which Sanders is so impressed — and they deserved an apology. The Vermont senator declined the opportunity. Instead, he said that the United States was “wrong to try to invade Cuba” and to overthrow militant socialist governments in Latin America. “Throughout the history of our relationship with Latin America we’ve operated under the so-called Monroe Doctrine, and that said the United States had the right do anything that they wanted to do in Latin America,” Sanders asserted.

Either Bernie Sanders is remarkably ignorant, morally obtuse, or he believes his supporters are fools.

In the increasingly socialized American education system with which Sanders is so enamored, the study of American history has surely deteriorated. They do, however, still teach the Monroe Doctrine in public schools. And they teach it as it is: the doctrine that held the United States would oppose European intervention and influence in the Western Hemisphere; not the perverted Howard Zinn version of history to which Sanders and his fellow travelers subscribe.

Sanders’ desire to re-litigate the Cold War is all consuming. Clearly, the man’s formative period as a mock revolutionary in the late 1960s still informs virtually all of his political beliefs today. Sanders is still waging a war against Henry Kissinger, and he is still denouncing Eisenhower’s CIA, which played an activist role in the ouster of democratically elected regimes in Iran and Guatemala – operations that served the much greater goal of containing Soviet communist influence. But Sanders’ desire to lump together these actions with the ouster of revolutionary, unelected governments in places like Nicaragua and Cuba is the height of irresponsibility. To ascribe to these regimes legitimacy is to consign their people – and future generations imprisoned by authoritarian socialist autarchism – to a nightmarish prison.

The America of Reagan sought to serve as a shining example of life beyond the iron curtains of communism. The America of Sanders would tell the world’s caged peoples that they should thank their captors.

Sanders isn’t alone in trying to rehabilitate an ideology that is so frequently driven to murder and oppression in order to “liberate” the world from the shackles of capitalism that it is quite obviously a feature of the system and not a bug. Donald Trump, too, is on a mission to transform the conservative movement into a slightly more nationalistic form of American progressivism. He is unable to distinguish brutality from strength and conviction, and so he ascribes to communist regimes legitimacy they do not deserve.

This contemptible, anti-democratic impulse was on display at Thursday night’s debate. In 1990, at the twilight of the Cold War, Donald Trump told his Playboy interlocutors that General Secretary Mikhail Gorbachev did not display “a firm enough hand” for a Soviet leader when faced with democratic uprisings at home and in the Warsaw Pact. Trump also offered oblique praise for the Chinese communist regime, which put down their 1989 democratic revolution with lethal force. “The Chinese government almost blew it. Then they were vicious, they were horrible, but they put it down with strength,” the celebrity candidate said at the time. “That shows you the power of strength.”

When asked about these comments, Trump insisted that he was not “endorsing” the vile murder of an untold numbers of Chinese democracy protesters. “I said that is a strong, powerful government that put it down with strength. And then they kept down the riot,” Trump said. “It was a horrible thing. It doesn’t mean at all I was endorsing it.”

Two observations: First, if you approve of the outcome of these brutal tactics, you do not genuinely believe them to be “a horrible thing.” Second, the notion that the Tiananmen uprising was a “riot” is sickening. These were liberal activists who had erected under the omnipresent gaze of Chairman Mao a replica of the Statue of Liberty. These were men and women willing to lay down their lives for the cause of democracy. Not only did Trump embrace the outcome of the Tiananmen massacre, he wanted to see the Soviets exert the same ruthless force in order to preserve a system that had killed tens of millions and enslaved half the world. That he would dare consider himself worthy of the Oval Office after such repulsive comments — or that a significant subset of the American public would endorse his presidential bid — exposes a crisis of purpose in the United States like nothing this country has faced in half a century.

America has forgotten communism. It is not merely a brutal ideology, but it is one that robs you of your humanity. It makes of you a cog in the system, and it forces you to divorce yourself from interpersonal relationships. Americans may still remember, in a detached academic sense, how socialism yields hardship and deprivation, but they have forgotten how it corrupts. Americans have forgotten how husbands informed on their wives in Honecker’s East Germany. Americans have forgotten how the children of the revolution tormented their own parents in Ceausescu’s Romania. They have forgotten the grotesque torture chambers and human experimentation that were commonplace in Pol Pot’s Cambodia. But what is most heartbreaking is that what Anne Applebaum dubbed The Great Forgetting is being enabled by those who lived through it all.

It is the duty of Americans of good conscience and those fortunate enough to be born into the freedom and prosperity of the West to remember and to resist. 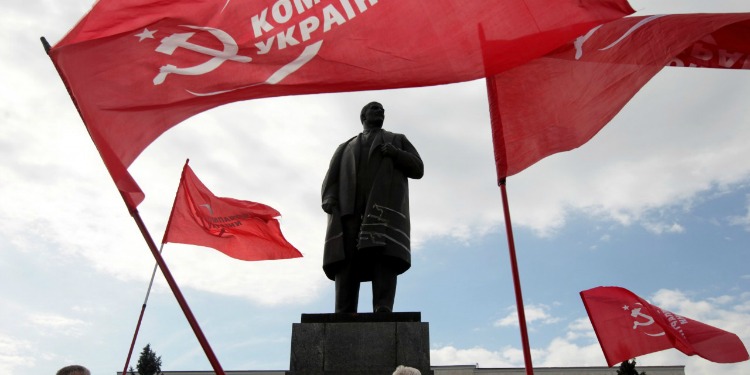 A Moment of Thanks and a Day of Horror