It’s impossible to ignore the conspicuous regularity with which Donald Trump issues intentionally provocative, news-cycle-dominating comments. It’s equally difficult to look past their timing, which tends to often coincide with scandalous revelations that reflect poorly on Democratic politicians.

The Daily Caller’s Matt Lewis and our own Jonathan Tobin were just some of the commenters on the right who noted the most lamentable casualty of Trump’s irresponsible call to block all Muslims from entering the country, beyond of course comity and decency, was a disastrous moment for Barack Obama’s presidency. Before the press became universally incensed over and obsessed with Trump’s latest ridiculous proposal, reporters were investigating how the worst radical Islamist terrorist attack on American soil since September 11 happened. Gone are the condemnations of Barack Obama’s ill-timed claim that ISIS was “contained” just hours before the Paris attacks. Gone are the recriminations of his prime-time self-indictment, in which he insisted Americans stay the course of his failed war. When the president warned the country not to engage in a backlash against Muslim Americans, Republicans were perplexed as to where exactly the evidence for this forthcoming backlash was until Donald Trump manufactured some.

This is far from an isolated event; it’s a pattern. First, a Democrat becomes embroiled in a controversy or an external event reflects negatively on the party. Donald Trump then makes an outrageous comment calculated for maximum political impact. Like clockwork, the press abandons their critical examination of Democratic policies, and Republicans are back at each other’s throats. This is a measurable phenomenon. In just the last six months, there are almost too many examples to count.

On June 29, Fox News revealed that former Secretary of State Hillary Clinton and the president had exchanged information on the night of the deadly Benghazi attack, a revelation that indicated the president was possibly coordinating the nation’s response to that terrorist event as it was ongoing. The details of that exchange were withheld from the press, but not on the grounds that they were classified in nature. Less than 36 hours after this revelation, however, the trail the press was following went cold after they became sidetracked by Donald Trump’s contention that Illegal immigrants from Mexico are “bringing drugs, they’re bringing crime; they’re rapists.”

The fallout from Hillary Clinton’s early July interview on CNN, the first national television interview of her campaign, was still settling on July 12 when CNN’s John King declared her contention that she had never received a subpoena for her emails from congressional investigators “just simply not true.” Who knows how far the condemnation might have gone, because the following day Trump asserted that he would have preferred it if the United States invaded Mexico instead of Iraq in 2003.

The Center for Medical Progress made a splash on July 14 when the first of a series of undercover videos featuring controversial and potentially illegal practices at Planned Parenthoods. That controversy exploded on July 15, when conservatives noticed a conspicuous lack of interest in the sting video from major media outlets. But even conservatives had moved on by July 18, when the Planned Parenthood controversy took a backseat to the latest tendentious Trump comments: His insistence that Senator John McCain was no war hero because he allowed himself to be captured by the Viet Cong after being shot down over Hanoi.

On August 14, Hillary Clinton’s rolling email controversy began boiling once again when an investigation into her emails discovered they contained what was surely classified information, including satellite imagery and confirmation of an unacknowledged program of drone-executed assassinations inside Pakistan. It wasn’t 48 hours before the nation moved on, however, when the Trump campaign released a white paper calling for the elimination of the provision in the Constitution extending birthright citizenship to the children of immigrants born on American soil.

“What, like with a cloth?” an unconvincing Hillary Clinton asked reporters when they inquired if she had tried to wipe information from her server before surrendering it to the FBI. That was on August 18, but that comment was quickly forgotten when Trump averred later that night that, as president, he would direct the courts to “find out whether or not anchor babies are actually citizens.” “I don’t think they have American citizenship,” he added, igniting the outrage cycle anew.

The federal government reluctantly admitted on September 23 that the Office of Personnel Management hack, allegedly executed by Chinese intelligence agents, was so severe that tens of millions of Americans may have had their personal information compromised. That same day, Trump decided to reignite his ongoing feud with the Fox News Channel and anchor Megyn Kelly, announcing that he was boycotting the network.

In a major blow to the Obama administration, Russia began an overt intervention into the Syrian civil war early on the morning of September 30. The news was briefly dominated by the scale of the threat posed by Russian forces operating in the same theater as NATO assets, but it was muted by Trump’s determination to spark a domestic debate over the refugees streaming out of that country on October 1. Trump, who had previously said the U.S. had a duty to accept Syrian refugees because “it’s a living hell in Syria,” now contended that America could not accept any refugees at all. What’s more, those we’ve already accepted must be deported.

The nation refocused its attention on the slow-motion train wreck that is ObamaCare on October 15, when the Congressional Budget Office revealed that new enrollments would come in well below projections. This threat to the stability of Barack Obama’s signature achievement was buried in an avalanche of Trumpian furor, now directed toward George W. Bush who he noted did not keep the country safe on September 11. “Blame him or don’t blame him, but he was the president,” Trump said.

American eyes turned toward Hillary Clinton on October 22, as she prepared for a marathon testimony over her role in the Benghazi attacks before a Congressional panel. Those eyes were, however, briefly redirected back toward Trump on that afternoon when he insisted that his reduced standing in polls of Iowa Republicans was the result of genetically-modified corn rendering Iowans idiots. Like the image of Nazi soldiers overlaid on an American flag, Trump later insisted that this blooper was the work of an intern.

Hillary Clinton suffered a brief moment of scrutiny in the press when she was criticized for not correcting an audience member who gleefully joked about throttling the life out of Carly Fiorina. Clinton laughed at the dark joke, and Trump would have been justified in piling on Clinton. After all, he was also criticized for not correcting a town hall participant who called Obama a secret Muslim. Just over 24 hours after this gaffe exploded in the press, however, Trump changed the subject again. This time, linking what he determined were the eerie similarities between the violent pathology to which Ben Carson admitted having as a youth and the same mental deficiencies that afflict a child molester.

Three days after the Paris terror attack, Barack Obama delivered a remarkably callous assessment of the terror threat by calling the slaughter of over 130 civilians a “setback.” That same day, Trump opted to flog his idée fixe when he insisted that Syrian refugees represent a “Trojan horse,” and may be part of a larger “plot” to attack the United States from within.

Americans were still reeling from the Paris attacks when Democrats on the debate stage committed a number of gaffes. Those included the candidates’ universal determination not to say the phrase “radical Islam” when referring to the war on radical Islam and Bernie Sanders’ bizarre claim that climate change represents a more immediate threat to American national security than terrorism. Hillary Clinton did herself no favors when she insisted that the donations she received from Wall Street executives was her way of coping with the 9/11 attacks. The press was still coming to terms with this bizarre assertion on November 19, when Trump insisted that he would “absolutely” create a database designed to track all Americans who practiced the Muslim faith. Political reporters moved on; Clinton was saved.

None of this establishes either correlation or causation, but it is remarkably coincidental how often Donald Trump has rescued Democrats from the jaws of a terrible news cycle and the withering scrutiny of the press. The celebrity candidate’s many distasteful comments are certainly doing the Republican Party no favors, but you cannot say the same for Democrats. 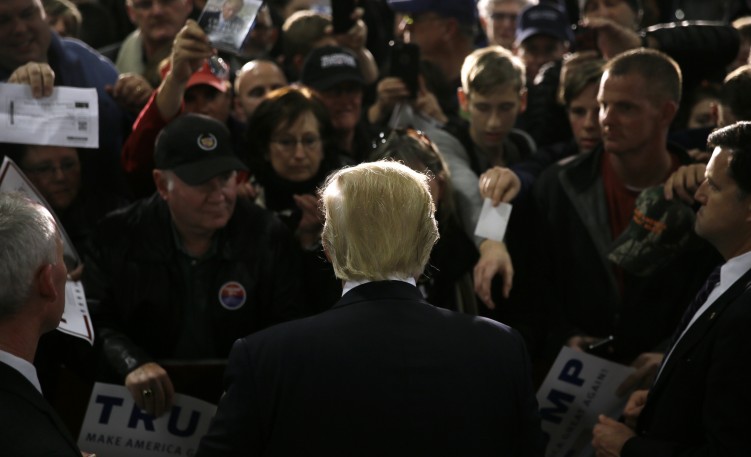