There is grumbling in the ranks. Marco Rubio has been enjoying an uptick in the polls for several months. By November, the combination of his attractiveness to nearly every wing of the Republican Party and his appeal to the GOP donor base began to indicate to political professionals that the Florida senator has a real shot at the nomination. Maybe even the best shot. The Florida senator’s pathway to the nomination looks, however, like it can only be won after March and April, following the nominating contests in populous states with a more ideologically diverse electorate. That means maintaining his position in the polls through February, but Rubio allies are already ringing alarm bells over the junior Sunshine State senator’s lackluster field operations in the early states.

Perhaps Marco Rubio’s campaign doesn’t want to set expectations too high. Maybe he is being extremely frugal with his hard-earned campaign contributions. Perhaps he has calculated that the era of foot soldiers and precinct offices is over, and the better bang for your buck is in television advertisements. Whatever the thinking, reports are surfacing that suggest the Rubio campaign is taking a hands-off approach to campaigning in the early states that traditionally favor candidates with a strong retail strategy. That strategy is starting to worry the senator’s backers.

“Some Rubio backers in the early states are voicing concern about whether Mr. Rubio is leaving voters there with the impression that he does not need them to win,” the New York Times reported on Thursday. “And some of Mr. Rubio’s own aides are now arguing privately that they should do more to push back against the belief that he is running an indifferent campaign before it becomes too widespread.”

In Iowa, that impression has already become widespread. The campaign began to push back against this process-heavy narrative earlier this month when Rubio operatives promised that the freshman senator will soon release a list of endorsements from local Iowans that will shock the political world. That might still be forthcoming, but the Times story suggests that other campaigns – Ted Cruz’s, in particular – are beginning to look enticing even for committed Rubio backers.

“There’s reportedly a joke going around among Iowa Republicans that Marco Rubio must be running for mayor of Ankeny, the Des Moines suburb where his sole Iowa office is located,” read the lead in an account published in FiveThirtyEight via Louisiana State University Professor Joshua Darr. He noted that the candidate rarely holds rallies too far beyond his headquarters in the Hawkeye State, and has otherwise eschewed forward operating bases in the form of brick-and-mortar field offices.

The Washington Post’s Jennifer Rubin suggests that the traditional approach to retail politics would not benefit Rubio as much as it does candidates who rely on votes from more far-flung portions of the state. “While evangelical contenders like Rick Santorum and Mike Huckabee have to go search for every vote in every rural county, it’s not clear that would be productive for Rubio,” she wrote. Possibly, but why would the state’s urban population be inclined to reward the detached and distant candidate in a state where campaigning for the caucus victory often means touring all 99 counties?

What about New Hampshire? The Granite State is traditionally friendlier toward Republican politicians in the more establishmentarian mold, and its open primary usually gives moderates a leg up. As Jonathan Tobin observed, the pathway toward the nomination often successfully trod by moderates is unusually crowded this cycle. Candidates like John Kasich, who have invested heavily in the state since early summer, old favorites like Jeb Bush, and rising stars like Chris Christie could overtake Rubio in the polls between today and February 9. That’s particularly likely if Rubio fails to turn in a commanding performance in the Iowa caucuses the week prior.

What of the two other contests in February? The Rubio campaign has been putting substantial effort into winning the Nevada caucuses, but the Silver State’s influence has never been as extensive as that of the most delegate-rich early contest in South Carolina. Local press touted Rubio’s mid-October “stealth” campaign ahead of the candidate’s tour of the Midlands, but the buzz around Rubio has since gone quiet.

Rubio’s early state strategy truly does deserve some scrutiny. There is something to be said for Dan McLaughlin’s contention that the Florida senator has embraced a form of strategic ambiguity that has kept his opponents guessing. It is a tactic that stands in stark contrast to foes like Cruz and Jeb Bush, both of whom have telegraphed their approach to the early states rather plainly. Still, the natives are getting restless, and this ambiguity is as confusing to Rubio’s allies as it is to his adversaries. If the impression becomes cemented that Rubio is merely playing to place and not win in the early February contests, he risks ceding his momentum to another establishmentarian candidate. Worse still, he might end up surrendering that wing’s hope of robbing Ted Cruz (or even Donald Trump) of the nomination altogether. The Times concluded by noting that Rubio will not make it clear which of the early contests he is making a real run at until next month, but a lot can happen in presidential politics in the interim. 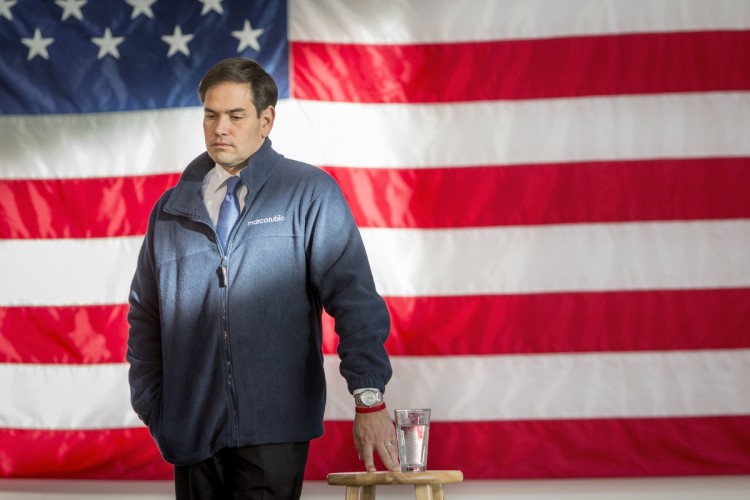