Few things are less tolerable than a truly senseless act of violence. People are pattern-seeking animals, and the natural impulse is to identify data points that render the inexplicable understandable. That instinct is even more intense in the wake of all-too-frequent mass shootings, and this weekend’s spasm of violence is no exception. But the derangement that compels someone to murder strangers also tends to render their worldview politically incoherent, and those who try to find some order in the chaos are often led astray.

This past weekend’s mass shootings committed by two gunmen with what appear to be diametrically opposed partisan dispositions is a useful case study. The shooter in El Paso, Texas, published a racist manifesto on a radical fringe website outlining his beliefs, leaving little to the imagination. By contrast, the shooter in Dayton, Ohio, left no such paper trail. And though his social media footprint indicates that he held far-left views and supported Democratic politicians, there is nothing explicit to suggest he was inspired by those views.

By Tuesday, the journalistic class began to find the effort to link these two shooters intolerable. “It’s beyond irresponsible to use the Dayton shooter’s lefty Twitter to assign a political motive,” wrote NBC News reporter Brandy Zadrozny. “The far-right would like to equate Dayton to El Paso. Don’t let them.” CNN host and media ombudsman Brian Stelter agreed. “Attempts to equate the El Paso and Dayton killers are ramping up,” he noted. “Authorities have not said that the Dayton attack was politically motivated in any way, nor have they described it as a domestic terrorism case.” When Trump adviser Kellyanne Conway noted that the Dayton gunman “appeared to have [a] leftist Twitter feed,” the Daily Beast reporter Sam Stein jumped. “It suggests that you believe his motive was political,” he wrote of her tweet. “Do you? If so, what information do you have to support that.” Stein later clarified that “while these details are interesting, there is simply nothing to suggest that this [is] on par with the El Paso shooting.”

These reporters are not wrong. There is a substantial information gap distinguishing the El Paso massacre from the killings in Dayton. The standard these reporters are setting is a valuable one. It would be nice, however, if this were a standard that had been applied to prior mass shooters.

Until this weekend, regular journalistic practice following acts of mass violence had been to comb through the suspect’s writings in the effort to uncover some ideological moorings. Most often, the sociopolitical nuggets journalist sift from the social media silt are of the right-wing variety.

The gunman who shot and killed three people at a food festival in Northern California last month was said to have “posted about a far-right book on Instagram moments before the attack,” according to the Daily Beast’s investigation. NBC News also reported on the shooter’s Instagram posts but, unlike the Daily Best, “declined to identify the literature by name in order to limit its spread.” Confoundingly, though, the alleged killer also posted ethnic slurs attacking both whites and people of mixed-race backgrounds, complained of “overcrowding,” and denounced the “degenerate” aspects of modern life. This mass shooter’s political identity is, to say the least, confused.

In June, the man who opened fire outside of a Dallas courthouse was found to have “uploaded right-wing memes to Facebook.” Although authorities refused to speculate on the shooter’s motives or comment on his social-media habits, the Daily Beast, the Dallas Observer, the Dallas Morning News, and the Los Angeles Times published accounts of the shooter’s social-media postings that indicated anti-government views and affinities for “incel” (involuntary celibate) culture. The fact that the shooter also posted the image of a sword, declaring it “a modern gladius to defend the modern Republic,” and fantasized about environmentally conscious Nazism only complicates things.

When a man in Tallahassee, Florida, killed two women and wounded four others at a local Yoga studio before killing himself, his misogynistic and sexually frustrated YouTube videos were the subject of rampant speculation. “It is thus possible the attack was motivated by far-right extremism,” wrote the New Yorker’s Chas Danner, who suggested that the videos indicate that this attack was part of a string of violence “perpetrated by a right-wing extremist.”

Even the gunman who targeted and killed high school students in Parkland, Florida, was the focus of journalistic efforts to frame his actions as a product of a coherent right-wing political philosophy. “It was unclear just how devoted, if at all, [Nikolas] Cruz was to the Republican president,” the Miami Herald confessed. Nevertheless, the fact that the shooter owned a red “Make America Great Again” hat led some to wonder whether that possession was really just, as the shooter’s friends told police, an attempt to irritate his Trump-loathing mother.

The through-line that connects these shooters isn’t their political rationality. Just the opposite. The El Paso shooter was not only a racist but a population controller and an “eco-fascist.” So, too, was the killer who slaughtered Muslim worshippers at a New Zealand mosque in March. “[T]here is no nationalism without environmentalism,” that killer wrote. The anti-Semitic gunmen who attacked synagogues in California and Pennsylvania earlier this year did not regard Donald Trump as their ally, despite his occasionally passive denunciations of their movement—an irritating complication for mainstream news outlets that asked in earnest “How much responsibility does Trump bear for the synagogue shooting in Pittsburgh?” Even the shooter in Dayton—a misogynist who supported Elizabeth Warren in 2020, a mass shooter who expressed his affinity for stricter gun laws—is a complicated figure.

It’s not unreasonable to expect terrorists targeting strangers in acts of mass violence to have some ideological motivation. Nor is it arbitrary to identify and explore a shooter’s radical beliefs in the effort to stigmatize them and prevent copycat attacks. No one should be shocked to learn, though, that disturbed individuals who carry out perverse acts of terror adhere to disjointed and illogical doctrines.

The desire among journalists to distinguish the El Paso shooter’s stated motives from the implicit notion that a set of political beliefs also animated the gunman in Dayton is an essential corrective. Unfortunately, this newfound principle seems only to be an outgrowth of the desire to avoid muddying a useful narrative in the age of Trump. 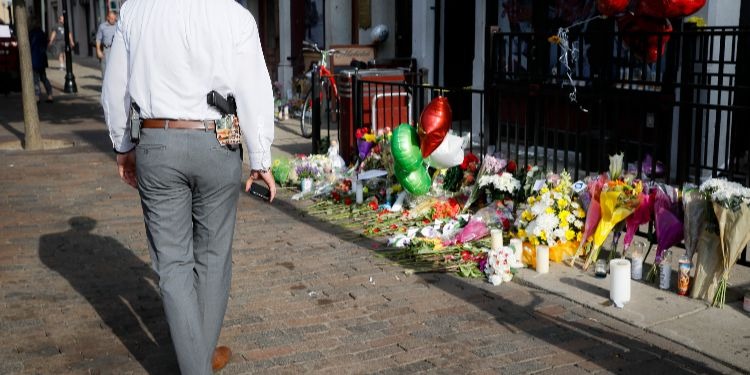