“This is a story of redemption.” That’s how Democratic Rep. Carolyn Maloney characterized the testimony Donald Trump’s longtime attorney, Michael Cohen, delivered before the House Oversight Committee on Wednesday. The president’s former fixer couldn’t have asked for more.

Cohen has been throwing himself upon the mercy of The Resistance ever since it became clear that he would face criminal charges related to his personal misconduct. To avoid an excessive sentence, Cohen had to share with federal prosecutors all he knew about the president. But in turning on his former employer and the party he leads, Cohen sacrificed his relationships on the right. He needed a new set of friends, to say nothing of donors to his legal defense fund. And so Trump’s attorney has embarked on a nakedly cynical campaign of emotional manipulation stimulating all the anti-Trump left’s pleasure centers.

Taken at face value, Cohen emerged from his plea agreement with federal prosecutors born again. With the convert’s zeal, he immediately began to preach not just against the sins of his former employer but in support of all things Democratic.

Cohen heaped praise upon Michelle Obama during her book tour, advising his fellow Americans to “pray that her words bring back unity to our country.” The former deputy finance chairman of the Republican National Committee re-registered as a Democrat and urged voters to turn out in 2018 to vote Republicans out of office. “If not, you’re gonna have another two or another six years of this craziness,” he wrote. It wasn’t self-interest but the admonitions of his father, a Holocaust survivor, that convinced Cohen to turn against his employer of over 10 years. According to Cohen’s associates, Maurice Cohen, appalled by Trump’s efforts to draw moral equivalencies between demonstrators in Charlottesville, told his son that he “didn’t survive the Holocaust to have his name sullied” by the president. And so, one year after the horrifying events at the 2017 Unite the Right rally so moved his father, Cohen flipped.

Cohen’s lawyer, Lanny Davis, confessed that his client wasn’t just turning against Trump but “distancing himself from the values of the current” administration. And the efforts paid off, quite literally. Hundreds of earnest anti-Trump voters contributed tens of thousands of dollars to Cohen’s GoFundMe account within hours of his heel-turn. “You don’t say you’ll take a bullet for someone unless you love them,” one 66-year-old Philadelphia widow told Vox.com’s reporters, “and I think that he was manipulated by a person who let him believe that they loved him back.”

Cohen’s testimony before Congress—a text that he admitted was composed following consultations with Democratic members of Congress and what he called “the party”—contained even more scene-chewing efforts to flatter the anti-Trump left. Not only did Cohen confess to lying for the president, intimidating his enemies, and covering up for his indiscretions—all of which would be sufficient indictment of Trump’s character, if not concrete evidence of criminal wrongdoing—Cohen insisted that Trump harbored racial animus.

“He once asked me if I could name a country run by a black person that wasn’t a “sh***hole,” Cohen confessed. As if this blatant alleged racism wasn’t bad enough, Cohen drove the point home: “This was when Barack Obama was President of the United States.” Cohen later admitted that the president sought to threaten the schools he attended so they would not release his grades or SAT scores to the public. “The irony wasn’t lost on me at the time that Mr. Trump in 2011 had strongly criticized President Obama for not releasing his grades,” Cohen added. He noted that this was after Trump called the 44th President “a terrible student.”

Cohen’s newfound discomfort with the president’s racial antagonism toward President Obama eluded him when Trump was the nation’s leading purveyor of the notion that Barack Obama was not a natural-born citizen. Under a federal prosecutor’s interrogation lamps, Cohen has seen the light.

If these transparent efforts to trigger a sense of solidarity among Democrats weren’t grating enough, when he was asked why he was testifying against the president, Cohen insisted it was to protest the “daily destruction of civility to each other.” This from a man who warned journalists reporting on the sordid detail of Donald Trump’s checkered private life to “tread very f***ing lightly, because what I’m going to do to you is going to be f***ing disgusting.”

That’s not all that has been forgotten amid Cohen’s quest for absolution. Few seem to recall how Cohen’s associates told reporters that he was “frustrated” by the president’s reluctance to pay his mounting legal fees. They don’t seem to remember how Trump’s allies reportedly worried that Cohen would cooperate with the special counsel’s investigation if they failed to comply with his demands. They’ve forgotten the very public debate in pro-Trump circles over the benefits for Trump of keeping Cohen within the president’s inner circle weighed cautiously against the costs of associating the president with his crimes.

“Good luck on your road to redemption,” said Democratic Rep. Mark DeSaulnier near the close of Wednesday’s hearing. “Thank you,” Cohen replied. “It’s going to be a long one.” If the anti-Trump left’s convenient amnesia is any indication, salvation can be purchased for the low, low price of toadying palaver. 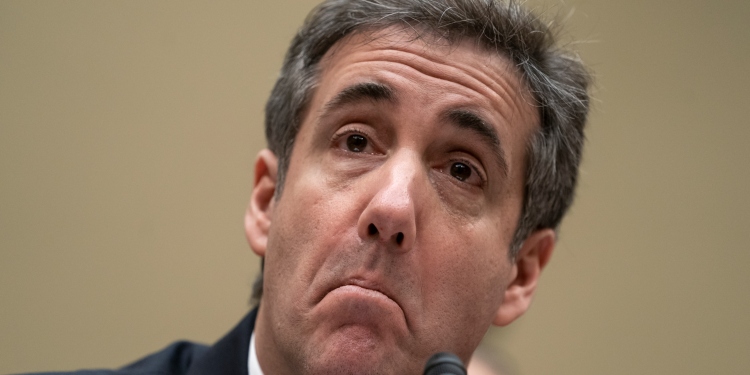