On Friday, the scholar and author Michael Novak passed away at the age of 83. COMMENTARY had the privilege of publishing his work on a number of occasions. His insights over the decades represent a vital contribution to America’s intellectual heritage. Novak’s 1989 essay on the competing ideologies of the 20th Century represents a work of considered thought that spans the generations. We commend it to your attention:

Related to enterprise is the more general virtue of creativity. For personal economic enterprise is not socially sustainable unless would-be entrepreneurs are supported by a social intelligence covering many areas—law, banking and finance, governmental administration, the arts, journalism, education, scientific and industrial research, and even religion and philosophy.

In fact, the virtue of creativity is so central to the capitalist society that, contrary to most of our dictionaries and economic textbooks, which tend to take their definitions of capitalism from Marx (of all sources), I define it as the economic system whose institutions are designed to nourish creativity in every sphere of life. As every virtue is accompanied by characteristic vices, so capitalist societies are often swept by a lust for novelty for its own sake; but such vices help to define the contours of the virtue. Perhaps Jean-Jacques Servan-Schreiber in The American Challenge might be credited with calling public attention in recent years to this aspect of capitalist development, noting, for example, that half the business of U.S. chemical companies in 1967 was based on products that had not even existed ten years earlier. But Ludwig von Mises and Friedrich von Hayek had long been making the same point…

Novak, an American Enterprise Institute scholar, is remembered by AEI President Arthur Brooks. We extend our condolences to the Novak family and mourn their, and our, great loss.

The American Enterprise Institute mourns the loss of our colleague, Michael Novak, who passed away this morning at the age of 83. Michael was an AEI scholar for three decades until his retirement in 2010, and remained a close friend of the Institute.

Michael arrived at AEI in 1978. In a remembrance of the AEI president who hired him, William J. Baroody, Sr., Michael once wrote that Baroody was the “first leader of a public policy think tank to grasp the importance of religion in public affairs.” Baroody’s perspective was AEI’s great fortune. It brought Michael into our organization. And once here, he built a hugely distinguished career as our George Frederick Jewett Scholar in Religion, Philosophy, and Public Policy.

The Spirit of Democratic Capitalism (1982), likely Michael’s most important book, advanced a bold and important thesis: America’s system of democratic capitalism represents a fusion of our political, economic, and moral-cultural systems. No facet can exist apart from the others. This thread ran through Michael’s whole career, including his most recent book, a co-authored work entitled Social Justice Isn’t What You Think It Is (2015). That topic was also the subject of one of several Bradley Lectures that Michael delivered at AEI, stretching back to the series’ inception in 1989, when he spoke on Thomas Aquinas.

Michael also convened one of the most consequential policy seminars in AEI’s history. In the mid-1980s, he assembled a diverse group of scholars to form the Working Seminar on the Family and American Welfare Policy. Their conclusions were published in 1987 as A New Consensus on Family and Welfare and were presented to President Reagan. It represented the first major policy statement to suggest a work requirement for welfare, and became the foundation of the successful 1996 welfare reform law.

Michael’s legacy stretches even beyond his great contributions to both philosophy and practical policy. One of his first published volumes was a novel, The Tiber Runs Silver. At the time of his passing, he was finishing another novel, set around the Johnstown flood in Pennsylvania in 1889. And in between, a profusion of spirited social commentary, pamphlets, and longer works poured from his pen. He wrote more than 35 books in his lifetime. Michael truly relished the competition of ideas. Both his curiosity and his brilliance seemed inexhaustible.

This work earned numerous recognitions. A few highlights include the 26 honorary degrees Michael received from colleges and universities, the Templeton Prize for Progress in Religion (1994), and the prestigious Lincoln Literary Award (2016). And during the Reagan years, Michael was asked to join AEI’s Jeane Kirkpatrick at the United Nations as a diplomat, serving as the US Representative to the Helsinki Commission.

This counselor of popes and politicians never ceased to inspire his colleagues here at AEI. His gentle and warm personality made him a beloved figure at the Institute.

Michael and his wife, the late Karen Laub-Novak, were valued members of the AEI family. We grieve today with their three children, Richard, Jana, and Tanya. And we extend our condolences to all who knew and loved this brilliant man. 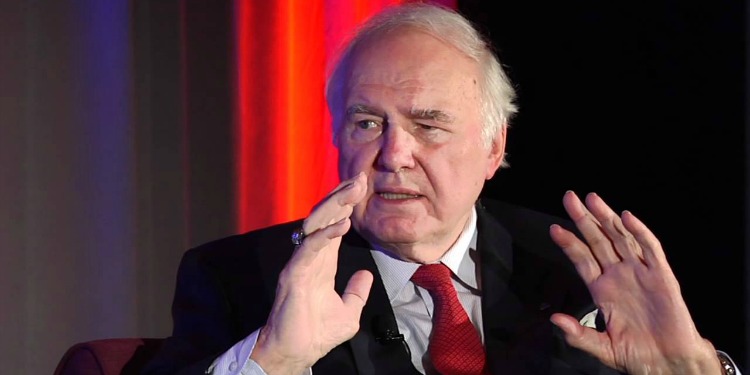