If Senator Al Franken has not resigned by the time you read this, it shouldn’t be long now. On Wednesday, a seventh woman publicly alleged that Franken had tried to force himself on her. That woman, a former Democratic congressional aide, claimed that the future senator justified his actions by contending, “It’s my right as an entertainer.”

Apparently, seven abused woman is one too many for Senate Democrats. Within the space of an hour, Franken’s once conspicuously deferential colleagues in the Democratic Senate Caucus publicly called on the Minnesota senator to surrender his seat. Democratic National Committee Chairman Tom Perez joined the chorus, insisting that “Everyone must share the responsibility of building a culture of trust and respect for women in every industry and workplace, and that includes our party.”

The Democratic Party of December 6, 2017, is a far cry from its incarnation just a few days ago. That party responded to the allegations against Franken with stony silence, believed that John Conyers was an “icon” deserving of a ponderous Ethics Committee investigation rather than exile, and its members insisted that elected representatives should be held to lower standards of conduct than morning television hosts.

Democrats are going to pat themselves on the back for belatedly abandoning the tribalism and hypocrisy they courted when Conyers was an invaluable member of the Congressional Black Caucus and Franken was a fundraising draw who bankrolled his fellow Democrats. Senate Democrats are, however, owed a measure of gratitude. It’s never too late to get on the right side of history, as it were. Moreover, this maneuver could have potent political implications. It frees up Democrats to fire a withering round of righteous indignation at the Republicans who are sheepishly following their mercurial president’s lead and embracing a U.S. Senate candidate credibly accused of child molestation.

Late Monday night, the Republican National Committee announced its intention to reverse course and reinvest in Roy Moore’s campaign for Senate in Alabama. The committee had pulled out of the race along with the GOP’s senatorial committee following the revelations from several women who claimed that Moore had taken advantage of them when they were minors. The RNC’s piddling investment in the race isn’t enough to move the needle, but it is enough to satisfy Donald Trump, who recently endorsed his fellow accused molester for high office. “The RNC is the political arm of the president,” said an unnamed staffer presumably chained to a desk at the RNC, “and we support the president.”

The RNC’s gambit was only ever an attempt to force Moore to quit the race, as so many Republican senators insisted that he should. But there were never any teeth to their claim; Mitch McConnell never seriously entertained the idea of refusing to seat Moore should he win, which is the only threat that could have communicated the futility of the Alabama candidate’s decision to remain in the race. Moore likely calculated that the same collective-action problem that kept Democrats from lunging at Franken and Conyers would compel Republicans to back off of him. It was a safe bet based on an educated guess.

Republicans “scrambled” in a similar fashion following the release of the “Access Hollywood” tape, which featured the voice of Donald Trump bragging about his penchant for sexual abuse and adultery. At the time, the Wall Street Journal reported that former RNC Chairman Reince Priebus encouraged party officials to redirect funds away from the presidential race and toward salvageable down-ballot candidates. “At some point, you have to look in the mirror and recognize that you cannot possibly justify support for Trump to your children—especially your daughters,” said Missouri businessman David Humphreys, who personally contributed over $2.5 million to the RNC between 2012 and 2016. But Trump ignored the calls for him to abandon the race, won, and compelled his fellow Republicans to recant and embrace their flawed president. Why wouldn’t Roy Moore think he could follow the same trajectory as the president?

He just might, but Democrats are in an interesting position now. They are no longer burdened by having to defend Hillary Clinton, who, despite her rhetoric about women deserving “the right to be believed,” had no qualms about impugning the motives of her husband’s accusers. Shorn of the hypocrisy associated with circling the wagons around abusers like Franken, Conyers, and Rep. Ruben Kihuen, Democrats are free to heap unreserved moral indignation upon Republicans. They can and, with the aid of their allies in the press, will compel every elected Republican to squirm as they decide whether to attack their own party’s voters or endorse bigotry and moral depravity.

Time was always on Roy Moore’s side, and it seems like he’s managed to wait out the worst. The initial hit his poll numbers took following the allegations involving his alleged sexual impropriety has abated. With the president by his side, Moore is assured that his fellow Republicans are going to have to carry his baggage whether they like it or not. Republicans don’t have to accept this fate, but turning on Moore now means turning on Trump, his voters, and the party he commands. That’s a risk few Republicans in Congress are prepared to accept, but conscience may demand it of them. Democrats are readying an attack on the GOP meant to brand it; no longer will it be just “the party of the rich,” but the party of sexual abusers and ephebophiles. Is that really what conservatives in Congress signed up for? 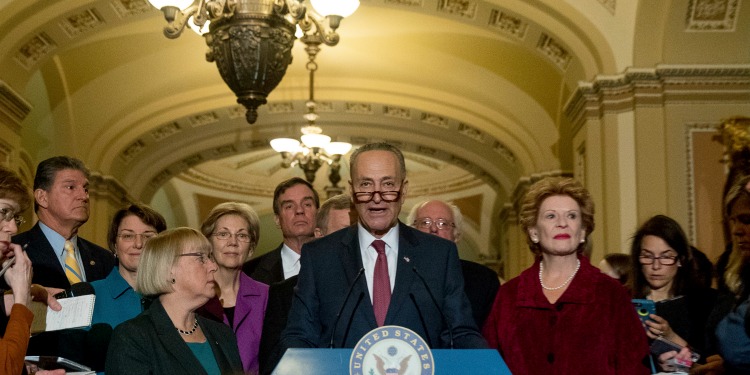