The State Department has long been a haven for those who are apt to view the diplomatic process as its own end. This point of view inevitably leads to conflicts of interest with the White House, as American presidents are often compelled by events to see the eternal diplomatic process as a self-defeating obstacle to any number of policy objectives. What’s more, that process can be corrupting. It tends to lead American diplomatic professionals to succumb to a sort of Stockholm Syndrome. More often than anyone should be comfortable with, we find the words of the world’s worst actors spill from the lips of our chief diplomats.

Secretary of State John Kerry served on Tuesday as an ignoble example of this unattractive tendency by America’s career diplomats or, in Kerry’s case, those who have aspired to the craft of diplomacy throughout their careers. Amid remarks delivered to the families and the staff of the United States embassy in Paris, Kerry performed a unique feat of moral equivalency.

There’s something different about what happened from Charlie Hebdo, and I think everybody would feel that. There was a sort of particularized focus and perhaps even a legitimacy in terms of – not a legitimacy, but a rationale that you could attach yourself to somehow and say, okay, they’re really angry because of this and that. This Friday was absolutely indiscriminate. It wasn’t to aggrieve one particular sense of wrong. It was to terrorize people. It was to attack everything that we do stand for. That’s not an exaggeration. It was to assault all sense of nationhood and nation-state and rule of law and decency, dignity, and just put fear into the community and say, “Here we are.”

There’s a lot to unpack here. Let’s dissect this statement.

Kerry’s effort to draw some form of distinction between the coordinated terrorist assault on the offices of Charlie Hebdo in January (and a Kosher grocer full of Jewish customers, which the secretary declined to mention) and the coordinated assault on a variety of Parisian targets yesterday was deeply misguided.

Kerry found himself suggesting that there was a sort of “legitimacy” to the attack on the offices of Charlie Hebdo before catching himself and instead contending that there was a “rationale” to that terrorist strike. Kerry might as well have said that the Hebdo satirists were asking for it. Indeed, many a liberal essentially said the same thing several months later when a group of Americans successfully replicated the conditions that led to the murder of these famous French provocateurs. For Kerry to lend credence to the notion that anyone could at least see why a band of terrorists who were trained and funded from Islamist sources overseas had reasonable grievances is the height of irresponsibility.

Believe it or not, Kerry’s next comment was perhaps even more ill-conceived.

“This Friday was absolutely indiscriminate,” Kerry insisted. “It wasn’t to aggrieve one particular sense of wrong. It was to terrorize people.”

There is no plausible way to interpret Kerry’s comments as anything other than a tortured effort to again erect some sort of comforting fiction that whitewashes the virulence of the radical Islamist ideology. These attacks were anything but indiscriminate.

As our Jonathan Neumann noted, the attack on the Bataclan Theater in particular could hardly be called random. It was a theater that was Jewish-owned until just weeks ago. It was a theater that was widely known for its friendliness toward Jewish and pro-Israeli causes. It was a theater that was often the target of the anti-Semitic BDS movement and whose staff was repeatedly harassed by anti-Israeli protesters. Even the American band that was playing on stage the night that hundreds of theater-goers were slaughtered had recently performed in Israel. Either Kerry is unaware of these details, which would itself be inexcusable, or he has opted to deemphasize their relevance.

Even minus the Israeli connection which should not be dismissed, the targets selected that night were far from random. A soccer stadium, several posh restaurants, a shopping center, a concert venue; these are not targets selected by chance. They are temples to Western decadence and the civilizational notions of free enterprise, leisure, and multiculturalism. Kerry seemed to acknowledge this in his stream of consciousness rant when he noted that these ISIS-linked militants sought to “attack everything that we do stand for,” but that perfunctory acknowledgement seemed to be an afterthought.

Elsewhere in the administration, former State Department Spokeswoman Jennifer Psaki struggled to quiet the growing chorus of condemnation over the president’s handling of the ISIS threat. “It’s an issue I would really warn people against playing backseat driver on,” the former Foggy Bottom spokeswoman and now White House communications director warned. This was another instant hit from the former diplomat who expressed her dismay over the Russian invasion and annexation of portions of Ukraine by noting that Moscow had failed to “live by the promise of hashtag.” While it is hard to blame a spokesperson for doing their job, even if what they are tasked with defending is indefensible, this administration has given the public every reason to second guess it’s nearly 18-month long approach to this war. Not merely in deed, but now in word, this administration has demonstrated that it does not deserve the benefit of the doubt when it comes to ISIS. On Saturday night, America saw the Democratic Party’s presidential aspirants steadfastly refuse to name the enemy in this conflict. Today, we learn that the American secretary of state would like you to believe their targets are being selected entirely at random. Why should anyone have any faith that the in-party can conduct this war competently when they so freely admit they have no idea how their adversary thinks? 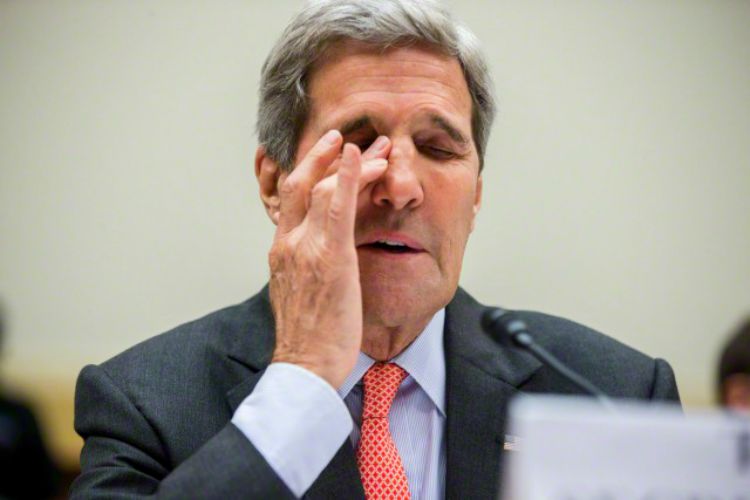