When it comes to impeachment, the House Democrats’ job is essentially over. The two articles before the chamber have passed, and Donald Trump is now impeached. The only obligations left to them are to notify the Senate of their conclusions, name managers of the process, and allow the Republican-led chamber to reach a verdict, which some of its members (including leadership) say they’ve already reached. It should hardly come as a shock that a legislative chamber full of lawmakers who have been outwardly skeptical of the drive to impeach Trump will take a dim view of the articles against him, but the inevitability of what’s about to happen seems to be a surprise to Democrats.

Late Wednesday night, Speaker Nancy Pelosi floated the possibility that the House might withhold the articles of impeachment against Trump and not transmit them to the Senate at all. At least, not until she receives assurance from Majority Leader Mitch McConnell that the process will proceed in a manner that satisfies House Democrats.

The Speaker has been in politics for a long time. She has a demonstrated capacity to advance her party’s interests at all costs, even including her speakership. Perhaps she’s playing a shrewd game here, too. But you have to squint to make the end game out. And even then, the blurry object on the horizon looks decidedly unsatisfying from a Democratic perspective.

There are three obvious downsides associated with Pelosi’s apparent strategy. The first is that it utterly contradicts the approach the House has taken over the last three months.

The need to impeach the president was such an urgent matter, we were told, that the House could not wait for the courts to rule on challenges to the White House’s efforts to prevent key witnesses like Mick Mulvaney, Don McGahn, and John Bolton (whom House Democrats didn’t even subpoena) from testifying. These important figures all claimed they would await guidance from the judiciary before consenting to testify, and the indications were that the extraordinary nature of the impeachment process would prove compelling. Now the courts aren’t even sure if they are obliged to continue litigating the matter. With the articles passed, the issue is all but moot. Democrats now insist that the Senate cannot proceed unless it hears from these witnesses, but that is also tacit admission that the fact-finding portion of impeachment proceedings was unduly rushed.

The second problem with Pelosi’s maneuver is that she will be ignored. Perhaps the speaker is trying to establish herself as McConnell’s foil, but the majority leader would have to confer upon her the authority she is demanding. And why would he? The House has no authority to dictate terms to the Senate. Nor should the Senate establish the rules that will govern Trump’s trial until the chamber has been properly informed by the House of the president’s impeachment. Pelosi is essentially threatening the GOP with a good time. Why shouldn’t the upper chamber simply dismiss the demands of House Democrats, making them look impotent in the process while drawing the inevitable out?

And that establishes the third problem with Pelosi’s maneuver: Time has not been on Democrats’ side. Democrats had little choice but to rush the depositional phase of impeachment proceedings, in part, because of the presidential campaign calendar bearing down on them but also because public opinion is slowly reverting to the mean. Support for impeaching Trump has declined steadily since the revelations involving Ukraine began to be litigated in a partisan environment like Congress, and that effect shows no signs of slowing. As for the Democrats who supported these articles, why wouldn’t members of the GOP in the Senate want to allow them to twist in the wind while also giving the Trump-supporting constituents of persuadable Senate Republicans time to pressure their lawmakers?

It’s easy to see why Democratic leadership was so eager to tamp down the demand for Trump’s impeachment from her caucus’s most zealous members. Whatever the merits of Pelosi’s strategy may be—and if you are aware of them, please let me know what they are—they seem objectively outweighed by the downsides. If Pelosi has bluffed her way into a loss, it is a rare strategic mistake on her part. But you do what you can with the hand you’re dealt. 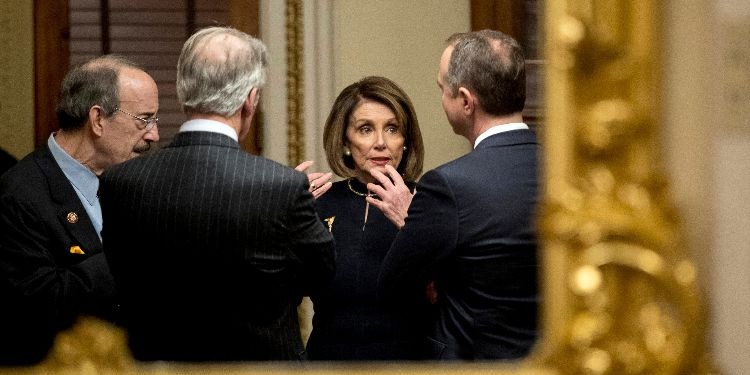