In the announcement that South Carolina Governor Nikki Haley will accept the role of American Ambassador to the United Nations under President Donald Trump, there is plenty to celebrate. The foremost of which is perhaps the contempt for the prevailing diplomatic culture in Turtle Bay inherent in the selection.

First among the reasons to be thankful this season is Trump’s decision to embrace a figure who not only opposed him in the primaries but who was viciously critical of the president-elect. The next United Nations ambassador, should she be confirmed, will be one who called her boss “everything a governor doesn’t want in a president.” Trump has not held a grudge, and that’s a truly encouraging sign. This also suggests that a Tuesday Wall Street Journal report indicating Haley was the leading candidate for this role was correct. That report revealed encouragingly that Mitt Romney and General James Mattis are leading candidates to head up the State Department and the Pentagon, respectively.

Second, Haley’s ascension represents a repudiation of the kind of heedless isolationism represented by the paleoconservative right and the revisionist progressive left. These disparate ideologies have found common cause in opposing the vision for an extroverted American foreign policy supported by the oft-maligned yet little-understood neoconservative movement. Senior advisor to the president-elect Steve Bannon set up a meeting with one of the proponents of this foreign policy vision, Democratic Representative Tulsi Gabbard, who was reportedly under consideration for the Mission to the United Nations. The Hawaii congresswoman, who has incautiously echoed Russian propaganda and urged withdrawal from the defense of American interests abroad, is out.

The most enjoyable signal telegraphed by the selection of Governor Haley to lead the American mission to the UN is the due disdain it conveys for an ambassadorial culture at the UN that views diplomatic process as its own end.

Haley is not a career diplomat, and she has almost no foreign policy experience. Her views on foreign affairs are not widely known, save the extent to which she joined her fellow conservatives in criticizing Donald Trump’s support for retrenchment and a restrictive immigration regime. She did not rise through the ranks of the foreign-policy establishment, and that has those who did in a tizzy.

Following in Obama’s model, the post of United Nations ambassador will remain a Cabinet-level position. Obama chose to elevate it in order to curry favor with the United Nations following what Democrats perceived to be the disrespect shown the institution by George W. Bush’s administration. That’s not the first time this has occurred—Ronald Reagan made the post a Cabinet-level position when he appointed Jeane Kirkpatrick to the role, as did Dwight Eisenhower when he appointed Henry Cabot Lodge to the mission—but it is auspicious. Ironically, in seeking to augment the influence the UN had over American foreign policy, he diminished it.

By reshaping the role from an ambassadorship to a functional White House advisory post, the UN ambassador is compelled to spend much less time in New York City and more time in Washington D.C. Haley, like her immediate predecessors Samantha Power and Susan Rice, will be limited in her ability to conduct informal consultations with her fellow diplomats. Formally, the UN ambassador reports to the Secretary of State but, under Obama, she has had far more influence over American diplomatic affairs but not much autonomy. While this will surely lead to conflicts within the administration over foreign affairs, this appointment bodes well for Republicans who feared that a conspiratorial semi-isolationist worldview would emerge dominant in Donald Trump’s West Wing.

The United Nations has become a cesspit of contemptible anti-Americanism that serves only to give the authoritarian nations undue influence over the course of global affairs. Its legations rewrite history so as to edit Jews out of Jerusalem. Its human rights commission elects by secret ballot human-rights violators like Muammar Gaddafi’s Libya and Saudi Arabia to lead. It is the font of scandals, including abuse of the Iraqi Oil for Food program and the allegations that the UN covered up the sexual abuse of minors by peacekeepers in war zones. The United Nations regularly infringes on U.S. sovereignty by imposing on it climate regulations, restrictions on maritime navigation rights, and attacks on American freedoms in the Bill of Rights.

Will Nikki Haley make a good ambassador to the United Nations, whatever that means? It’s difficult to say. She will, however, be a welcome departure from a corrupting culture and an important voice advising President Donald Trump. 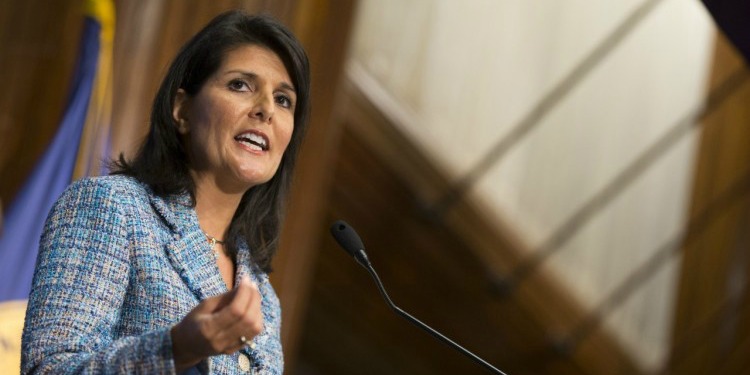