Ask liberal Democrats what they miss most about the Obama era, and one item you’re unlikely to hear them pine for is their lost sense of intellectual superiority. Donald Trump’s surprise ascension to the presidency did not impose humility on his critics. One formerly ubiquitous pseudo-scientific justification for liberal chauvinism has, however, faded into memory: the so-called crisis of “asymmetric polarization,” whereby those on one side of the political spectrum radicalize and those on the other do not. The phenomenon hasn’t disappeared. It’s simply become more pronounced on the left than it supposedly was on the right, which is why you no longer hear about it.

The Obama presidency saw careers made on the back of the myth that conservatives had become radicalized. The pro-Obama media landscape’s hunger for any alleged evidence that their adversaries were irrational and deserved to be dismissed was richly rewarded. Political pundits cloaked in academic regalia ascended to great heights by issuing partisan proclamations that were the supposed result of “study.”

Brookings Institution scholar Thomas Mann and American Enterprise Institute’s Norm Ornstein made bank on their willingness to “prove” that conservatives had self-radicalized, while liberals merely “sorted” themselves into like-thinking cliques. As early as 2010, Mann and his Brookings colleague William A. Galston were quick to remind Washington’s ossified centrists that their impulse to blame “both sides” for governmental dysfunction was misguided. They contended that the works of the 111th Congress—ObamaCare, a failed push for a “cap and trade” bill, “cash for clunkers,” the “stimulus,” and a host of other progressive projects—would have achieved bipartisan support but for the plague of reflexive partisanship overtaking the GOP.

The social scientists who attributed the Republican Party’s conservatism to the migration of conservatives from the Democratic Party to the GOP were given short shrift. They posited that what looks to some like radical polarization might, in fact, just be realignment as both parties have come to adopt the social and political views of the majority of their members. This wasn’t a particularly sexy theory, and it deprived the self-assured left of the chance to marvel at the brutishness of their political adversaries.

Then, a funny thing happened. All of the sudden, the nation’s rigidly conservative grassroots GOP voters were held in thrall to the idea that ideological conservatism was a dead end. This was, after all, the central question litigated by Republican voters in the GOP primaries. Instead of embracing honest conservatives with a record in government, the so-called radical conservatives gravitated toward a candidate who endorsed Bernie Sanders-style simulative public works projects, who backed a government mandate to purchase health insurance, and who had no use for longstanding conservative Republican prescriptions for economic growth. He mimicked social conservatism poorly by endorsing torture for terror suspects and punishments for women who have abortions. When anyone protested too loudly, this candidate would observe that “it’s not called the conservative party.” Perhaps because this was all was shrouded in aggressive language about immigrants and minorities, liberals didn’t seem to notice that the inflexibly conservative Republican base had begun abandoning conservatism.

The “asymmetric polarization” theory might have survived Donald Trump’s candidacy, but it could not outlast the Trump presidency. As it happens, the same conditions that led conservatives to become a more ideologically cohesive unit in the Obama era have led liberal Democrats to band together in the Trump administration. Advocates for “asymmetric polarization” were fond of citing the Pew Research Center’s work on the subject. Pew had found a trend among partisans in both parties toward ideological homogeneity, but that trend became far more pronounced among Republicans from about 2011 to 2014. Suddenly, Pew has found that trend reversing itself. The scope of this reversal becomes particularly pronounced when Pew’s data is translated into a visual medium.

That trend shows no signs of abating. According to October’s Harvard University-Harris poll, more Democrats are committed to taking actions that move the Democratic Party “even further to the left” even if that means opposing “the current Democratic leaders.” That opinion is shared by the vast majority of Democrats age 18 to 34, as well as Hispanic and black Democrats, high income-earners, and Hillary Clinton voters. In other words, the influential elements of the Democratic coalition have come to a consensus on the direction in which the party should develop. And while a plurality was skeptical that “left-leaning movements” would advance the party’s prospects in 2018, 17 percent of Democratic respondents said they believed the current crop of Democratic leaders in Washington are “farther to the left than my views.”

It’s not hard to see who is winning the intramural squabble over whether the Democratic Party needs to move back to the center. Occasionally, a nominal Democrat like Clinton administration analysts Mark Penn or Doug Schoen will pipe up, admonishing their fellow party members to hedge their bets only to have their ideas and their very identities savaged by their left-leaning detractors.

Meanwhile, the demands of liberal solidarity have led left-leaning Democrats into quagmires. Defending Linda Sarsour from her detractors means embracing “jihad” as a harmless expression of pacifist dissent. Praising “Western civilization” is tantamount to expressing Nazi sympathies. Bill Clinton’s administration and the 1990s generally are undeserving of their nostalgic appeal, lest you betray your covert approval of the “mass incarceration” of African Americans. Nationalized health insurance, expanded social security, shielding illegal immigrants from law enforcement, and reflexive opposition to Trump’s legislative priorities are Democratic imperatives. The failure to adopt these policies and values with religious fealty runs afoul of the party’s activist base. The base is known to punish those who go off the reservation.

Gone are the ersatz intellectuals who were so eager to scold and wring hands now that Democrats are behaving in precisely the same way as Republicans just a few years ago. The perils of polarization, asymmetric or otherwise, no longer seem to bother the arbiters of political good taste. What we’re witnessing among Democrats today is probably not all that dissimilar to what happened to the GOP under Obama–solidarity and cohesion resulting from negative partisanship, not commonality. That’s disturbing but not appalling, and analysts who were scandalized over the GOP’s rightward drift should be ashamed of their double standard. But honest circumspection like that won’t get you on television. 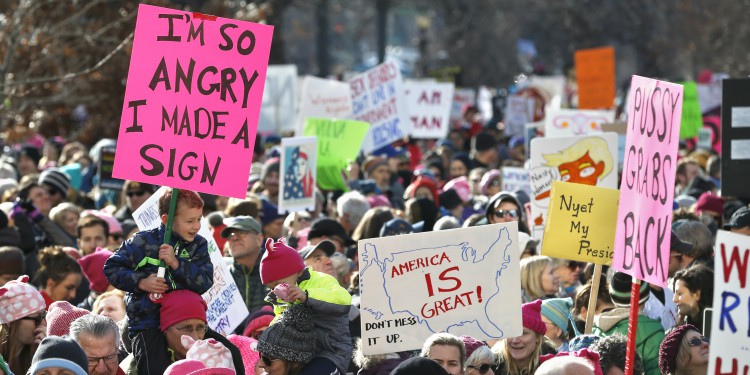