Before the stresses and strains associated with sitting behind the Resolute Desk had turned President Barack Obama’s hair grey, the president still paid homage to the childlike liberal fantasies with which he was preoccupied as a Chicago-based activist. When he still believed that his own force of personality could command the tides to recede, and while he maintained the adoration of a world happy to see anyone other than George W. Bush in the Oval Office, the president lent his support to that most prototypical of “progressive” goals: the rolling of the clock back to a time before mankind split the atom. The fantasy of “global nuclear zero” is a disquieting example of the left’s preference for comforting fictions. The nuclear accord this administration recently reached with the Islamic Republic of Iran has exposed the left’s steadfast refusal to appreciate the forces that govern nuclear deterrence and nonproliferation.

In light of the ballyhooed Iran deal, President Barack Obama’s supporters should review a speech he delivered in Prague in April of 2009. It is a testament to this administration’s commitment to transforming soothing bromides into actionable policy.

“Some argue that the spread of these weapons cannot be stopped, cannot be checked – that we are destined to live in a world where more nations and more people possess the ultimate tools of destruction,” the president insisted, adopting his favored tactic of rejecting a “false choice” that the more seasoned among us would call opportunity costs. “Such fatalism is a deadly adversary.”

“If we believe that the spread of nuclear weapons is inevitable, then in some way we are admitting to ourselves that the use of nuclear weapons is inevitable,” Obama fretted. After issuing this bizarre pronouncement, Obama went on to declare that the United States would serve as an example of a nuclear state leading the way by unilaterally dismantling and failing to modernize its nuclear arsenal. As for present and aspiring nuclear states around the world, he advocated the strengthening of the international non-proliferation regime. “Rules must be binding. Violations must be punished. Words must mean something,” he added. They’re laughing in Tehran.

Six months later, Obama would cancel a Bush-era deal with Poland and the Czech Republic to station radar and interceptor missiles there, angering the uniquely pro-American governments in those former Warsaw Pact states. Though he assured the Czechs in that fantastical speech that the United States nuclear umbrella would continue to keep them safe, the president has only allowed America’s nuclear deterrent to atrophy. Russia, China, India, and Pakistan are all engaged in the modernization and development of their strategic and tactical, low yield arsenals. In Moscow, financial constraints have compelled the Kremlin to rely heavily on these weapons as a crucial element of the Russian Federation’s defense doctrine.

Meanwhile, in America, nuclear scientists are departing for the private sector. Research into the development and effects of nuclear weapons is, as former Defense Nuclear Agency chief Robert Monroe wrote, “virtually nonexistent.” And programs aimed at developing next-generation delivery systems have stalled.

For the left, these are all welcome developments. A fundamental misunderstanding of the nature of mutual deterrence has led liberals to view the West’s defensive nuclear doctrine as needlessly provocative. Similarly, progressives are often at sea when confronted with the failure of toothless nuclear nonproliferation regimes. Obama insisted that the enforcement of nonproliferation demands that “words must mean something,” but talk is cheap. Only the cold calculus imposed on nation states by particular and existential national security threats, or the absence thereof, governs the spread of nuclear weapons technology.

Among the many concerns critics of the Iran deal have voiced is the likelihood that it leaves Iran a nuclear threshold state when it expires, presuming Iran does not violate the terms of the deal and race for nuclear breakout while the paralyzed international community looks on in horror. According to the deal’s liberal defenders, however, that’s not much of a concern. In fact, nuclear proliferation is no real threat at all. “Nuclear proliferation is a myth,” wrote Arash Heydarian Pashakhanlou in a piece republished in The New Republic. They’re laughing in Pyongyang.

“Proliferation, after all, means rapid spread. And whereas nuclear weapons have proliferated ‘vertically’, with existing nuclear states adding to their existing nuclear arsenals, there has not been a ‘horizontal’ nuclear weapons proliferation – that is, a fast spread of these weapons to new nations,” Pashakhanlou wrote. “On the contrary, nuclear weapons have spread slowly across the world.” He noted that 31 predominantly Western nations have the capability to develop a weapons program, but haven’t. What’s more, he noted that many other nations with similar capabilities have shelved or renounced nuclear weapons altogether. Bizarrely, he acts as though this was a natural phenomenon attributable to the laws of physics rather than the robust efforts of the American diplomatic and military sectors.

South Africa, Belarus, and Ukraine surrendered their nuclear stockpiles when and only when the perilous threat environment in their immediate neighborhood abated. Apartheid South Africa, fearing both its anti-Apartheid neighbor states and a Cuban-fueled communist insurgency sheltered in Angola, gave up its weapons program as the Soviet Union began to dissolve in 1991. Pretoria acceded to a comprehensive verification regime when it rejoined the African community following Mandela’s election. Ukraine and Belarus, founding members of the Commonwealth of Independent States treaty with Russia, surrendered their weapons in exchange for international security guarantees. Brazil and Argentina gave up their weapons programs only when the two nations put aside their historic animosities: a diplomatic coup culminating in the Treaty of Tlatelolco. But when the wave of democratization that crested in the mid-1990s began to recede, so did the progress toward reducing the number of nuclear states. The nuclearization of the Asian Subcontinent in the late 1990s is a testament to the forces that induce nations to go nuclear. When the perceived benefits outweigh the considerable costs, particularly when those benefits include self-preservation, no amount of gauzy appeals to common humanity will dissuade nations from developing a nuclear deterrent.

This measurable dynamic is why analysis that predicts a forthcoming era of nuclear proliferation in the Middle East is sound. Already, the signs they are right are apparent. In October, Egypt revealed plans to construct a 1,000-megawatt light-water reactor, sparking fears that Cairo’s 60-year-old nuclear weapons program (shelved temporarily following rapprochement with the West and Israel) could be revisited. Turkey, too, has begun constructing nuclear reactors with the assistance of a French-Japanese consortium. And officials in Saudi Arabia, an oil-rich state that has nevertheless contacted with South Korea to build indigenous nuclear reactors, have intimated that they may soon have a nuclear weapon program. That is, if Riyadh does not simply purchase off-the-shelf fissionable devices from Pakistan.

The left’s capacity for self-delusion, particularly where nuclear weapons are concerned, is limitless. The terms of the accord with Iran make that fact plain. But their faith in their own sophistry is incredibly dangerous, and it is making the world a more threatening place at a terrifying pace. 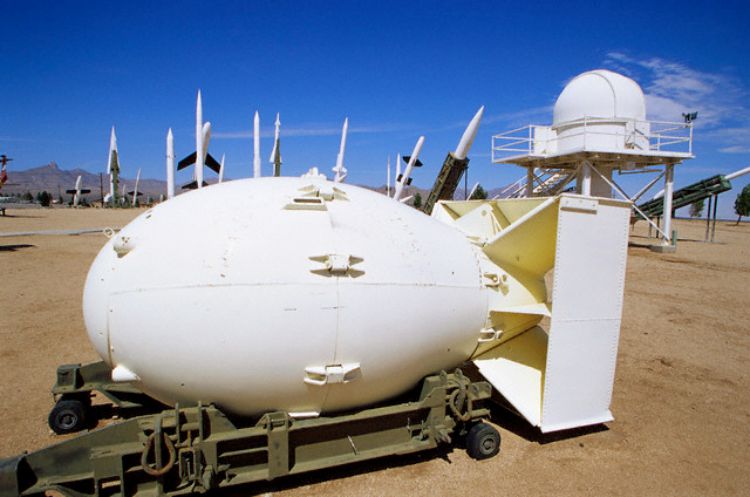