As John Podhoretz wrote, these are days of promise and opportunity for America’s political media professionals. So far, they’re squandering their shot. By indulging in ill-considered hysteria and posturing before like-minded colleagues, they sacrifice the credibility they’ll need to expose President Donald Trump’s mendacities. To repair some of the strained bonds between audience and journalist, media professionals must display some restraint when reacting to the latest alleged assault on freedom and decency. That is most easily achieved by recognizing that many of the unprecedented developments of the Trump era aren’t unprecedented at all.

On Tuesday evening, the President of the United States applauded the Fox News Channel “for being number one in inauguration ratings.” In issuing this congratulatory note, he also attacked CNN for being “fake news.” A predictable series of horrified and disappointed reactions from media professionals followed. Notable among them was that of CNN media reporter Dylan Byers: “The President of the United States wants you to watch one news organization and not another…” While Trump’s behavior hardly befits an American president, he is also crudely mirroring the Obama administration, which spent its first year in office seeking to discredit Fox News as a respectable media outlet.

The Obama administration was calling Fox “fake news” before “fake news” was a phenomenon. In October of 2009, White House Chief of Staff Rahm Emanuel told CNN that Fox was “not a news organization.” White House Communications Director Anita Dunn echoed Emanuel, saying that Fox “operates almost as either the research arm or the communications arm of the Republican Party.” “When we see a pattern of distortion, we’re going to be honest about that pattern of distortion,” said senior advisor to the president, Valerie Jarrett, when asked to defend the White House’s campaign against Fox.

Obama was still prosecuting the case against Fox nearly a year after the White House and the cable news network supposedly buried the hatchet. Just days before the 2010 midterm elections, Obama told Rolling Stone that Fox was cast in the mold of Hearst-era yellow journalism, and it pushes a point of view. “It’s a point of view that I think is ultimately destructive for the long-term growth of a country,” Obama said.

When the administration allegedly tried to exclude Fox in a round of interviews with “pay czar” Kenneth Feinberg in 2009, it inspired other networks to rally to Fox’s side. They did so not only out of professional courtesy but fear the future such a precedent might yield.

Fox News was not discredited by the president’s efforts. Arguably, the campaign had the opposite of its intended effect. There is a cautionary tale here for those cheering on Trump’s attacks on the press, but also one for media professionals who seem to have forgotten the last decade.

This isn’t the only recent development that has sent reporters into paroxysms of trepidation over this sacrifice of presidential dignity. Indicative of this administration’s obsessive fixation with its media coverage, the White House press office released on Wednesday a press release summing up the positive coverage it has received.

“Don’t recall ever seeing a WH do this,” remarked Huffington Post White House reporter Christina Wilkie. “Some might call it Propaganda,” NBC News’ Katy Tur averred. “I didn’t totally expect the 1984-esque dystopian future to be so soon, but life comes at ya fast,” snarked the Center for American Progress’s economist Katie Bahn. But this, too, is not an unparalleled abuse of the public trust; at least, not for those who remember how the Obama administration sold the public on the Iran nuclear accords in 2015.

The Obama administration’s “blog” content (now maintained by the National Archives and Records Administration), which includes former Press Secretary Josh Earnest’s “Regional Roundup: What America’s Newspapers are Saying About the Iran Deal.” The blog consisted entirely of favorable headlines from around the country reciting verbatim (and false) administration claims about the nuclear accord. “The Iran Deal” even had its own Twitter account which disseminated not only favorable press mentions but also crafted insipid pop culture memes to get the millennial generation jazzed about nuclear non-proliferation. Imagine the anxiety among journalists when the Trump White House mirrors this tactic.

John Podhoretz’s admonition is particularly relevant because so many of these Obama-era precedents did not get the left’s “creeping fascism” sense tingling at the time. To rend garments over these actions now only because the Trump White House is undertaking them is not just unwise; it’s insulting. 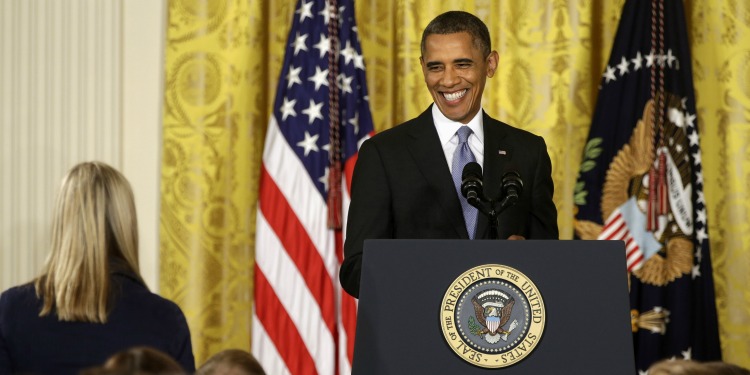