Attorney General Loretta Lynch thinks you’re stupid. Or, at least, her boss does.

According to CBS News justice reporter Paula Reid, the Department of Justice is trying to shift the national conversation surrounding the massacre at an Orlando gay club “more to hate and not just terrorism.” The layperson may see only a modest distinction between “hate” and “terrorism.” The latter is generally a violent expression of the former. For the Obama administration, there is a world of difference in the two concepts—the foremost being that the White House can’t be directly blamed for increased incidents of hate.

“I cannot tell you definitely that we will ever narrow it down to one motivation,” Lynch told reporters while expounding on a litany of reasons why a disturbed and violent individual may go on a rampage. “This was clearly an act of terror and an act of hate.” CBS appropriately headlined the attorney general’s attempt at obfuscation “a motive may never be known.” Well, the attorney general’s motives are surely known.

The DOJ sacrificed all plausible deniability that it was not trying to confuse the public about the Orlando shooter’s true motives when they thought it prudent to omit the shooter’s references to the Islamic State in a transcript of the 911 call in which he confessed to his crime.

“In the name of God the Merciful, the beneficent,” said Omar Mateen on the night of his rampage. “I pledge allegiance to Abu Bakr al-Baghdadi may God protect him [said in Arabic], on behalf of the Islamic State.”

It is an act of extraordinary hubris to dismiss what this self-styled ISIS militant has said and impose upon him some other series of motives that complicate the story. Surely, Lynch would prefer we be talking about “hate” and the supposedly elusive definition of Islamist terror rather than her announcement that the FBI has apparently lost track of Mateen’s wife, who was almost certainly an accomplice in this murder.

Lynch’s contention that Mateen’s fairly clear motive can never be truly known is not a new approach to deadly incidents of Islamist terror on U.S. soil. In November of last year, FBI Director James Comey insisted that we may never know precisely why 24-year-old Mohammad Yousuf Adbulazeez attacked and killed four U.S. Marines and one sailor that summer at an armed forces recruiting center in Chattanooga, Tennessee.

“We’re still trying to make sure we understand Abdulazeez, his motivations, and associations, in a really good way,” Comey said nearly four months after the attack. “Sometimes the way we investigate requires us to keep information secret. That’s a good thing. We don’t want to smear people.” Appropriately, the Associated Press headlined the revelation “Motive in Chattanooga shooting may never be released.” Alas, the country could not be expected to suspend disbelief indefinitely.

Three weeks later, a radicalized American-born Islamist terrorist and his Pakistani-born wife killed 14 people in San Bernardino, California. The rampage prompted the President of the United States to address the nation from the rare setting of the Oval Office. In his speech, Obama placed the attack in San Bernardino within the context of the attack at Fort Hood, at the Boston Marathon, and, revealingly, Chattanooga.

“And as groups like ISIL grew stronger amidst the chaos of war in Iraq and then Syria, and as the internet erases the distance between countries,” the president said, “we see growing efforts by terrorists to poison the minds of people like” those homegrown Islamist militants who attacked American sites.

Why Lynch feels it is appropriate to distract the public from the obvious, and to indict cynicism, bigotry, and religious sexual repression for the bloodshed in Orlando—a road down which Omar Mateen logically becomes the true victim in this case—is as bizarre as it is depraved. Eventually, like they did with the Chattanooga case, the lie collapse of its own weight. In the meantime, the administration hopes you will engage in a dialogue about hatred and ignore the terror-exporting caliphate in the Middle East to which this White House turned a blind eye until it was too late. 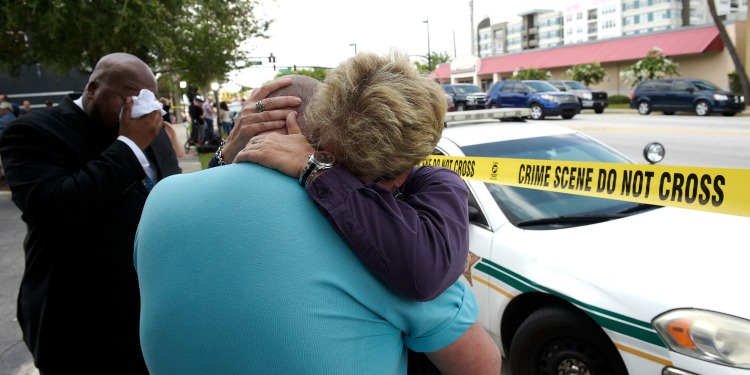