While it may be a dated version of a working draft of the GOP’s replacement for the Affordable Care Act, the text of legislation that is circulating in the press provides political observers with a window into how the Republican Party plans to “repeal and replace” ObamaCare. For conservatives, there is a lot in the proposal to like, but also provisions that are troubling. Naturally, the latter will get the most attention. The political intractability of some ObamaCare provisions demonstrates the permanence of sweeping reform legislation and why Republicans might be better served by adjusting their priorities.

It would be unfair to congressional Republicans to fail to note that this particular reform bill eliminates most of the onerous, market-distorting provisions contained within the Leviathan ACA. It eliminates many of the subsidies that reduce the incentives for those who are currently outside the labor force to remain there, and it kills the individual mandate to purchase insurance. Based on age, not income, the plan would establish tax credits to help uninsured patients afford private insurance plans.

The plan scales back or eliminates some of ObamaCare’s most burdensome tax provisions, including Medicare surtax on wages and self-employment income. It eliminates federal Medicaid expansion by 2020, but preserves capped payments to states based on the number of enrollees in states that expanded Medicaid already. Most encouragingly, the plan includes grants to states that would allow them to experiment with programs designed to increase coverage rates or reduce premiums.

Yet, there is plenty in the GOP’s ObamaCare repeal plan that, well, looks a lot like ObamaCare. For example, how does the GOP plan envision paying for its grants and entitlements? “As an alternative to ObamaCare’s individual mandate, the plan would allow insurers to charge people 30 percent more on their premiums if they had a gap in coverage and then signed up again,” The Hill reported. By letting insurers collect this fee, we avoid the conundrum of whether to call it a penalty or a tax, and we deprive the Supreme Court of the chance to rewrite such a provision so it comports with the Constitution’s enumerated powers.

Most troubling, the GOP’s plan for revenue generation leans heavily on a cap on tax-exempt status for employer-sponsored health-insurance plans above the 90th percentile. That is to say, the most generous health plans in the country would be taxed. When this was included in ObamaCare, it was dubbed the “Cadillac tax,” and its implementation was delayed on more than one occasion (the current implementation date is January 2020) due to stiff opposition from unions and businesses.

Realistically, the “Cadillac tax” is such a burden on America’s most influential that it was never going to be implemented. The provision was included in the bill with the best intentions, surely, but also and only incidentally so that the Congressional Budget Office could score the bill in a way that showed it wasn’t a monstrous, underfunded liability. Is the GOP embracing a similar tactic? If so, what is the point of all this? Is the aim to replace ObamaCare with ObamaCare lite or to pursue truly conservative health-care reform?

The troubling truth evident in this ObamaCare replacement proposal is that sweeping reform legislation once implemented is, indeed, pretty permanent. Even Republicans are reportedly balking at the idea that Medicaid expansion would be choked off, creating the politically deadly spectacle of needy Americans losing their only source of health coverage. Given how squeamish a series of rowdy town halls and the ACA’s rising poll numbers have made GOP lawmakers, it’s reasonable to think that this isn’t the only element of an ObamaCare replacement plan that will give Republicans the cold sweats.

Once Americans began to receive subsidized insurance and businesses were offered incentives to shift their health insurance coverage responsibilities onto the federal government’s shoulders, a bell that could not be un-rung had been struck. When apprehensive Tea Partiers warned about the permanent damage to American political and economic culture that ObamaCare would do, this is what they meant. They were right.

ObamaCare’s nagging longevity demonstrates why the GOP would be better served by focusing not just on mitigating the damage done by the former president’s health-care reform law but by crafting its own sweeping reform package. Republicans have a once-in-a-generation chance to overhaul the nation’s tax code and, with persistence and fortitude, the country’s perilously underfunded entitlements. Such reforms would inspire a legion of progressive protesters, mobilize the Democratic opposition, and might cost some GOP lawmakers their seats. But these reforms would also stand the test of time and leave an indelible mark on the American economy and its political culture. For some Republicans, it’s time to choose: their careers or their country. 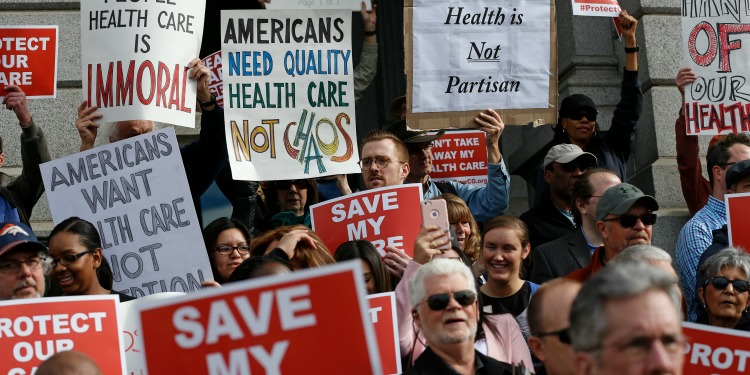