It was particularly revealing when David Axelrod explained that, of all his accomplishments in Barack Obama’s White House, he was proudest of the fact that “there hasn’t been a major scandal.” The qualifier “major” lays the burden on shoulders of the press to define what constitutes a serious scandal, and political media had thus far reliably covered the administration’s ethical lapses as merely the peculiar obsessions of addlebrained conservatives. Surely, much of the political establishment in Washington nodded along with Axelrod as he patted himself on the back. A mere seven months later, though, and it is clear now that the former advisor to the president will have to find pride in something else. This administration is many things, but scandal-free is not one of them.

Axelrod made these spectacularly naïve comments at a time when the administration was, in fact, mired in scandal. Despite repeated and unconvincing assertions to the contrary, none of the controversies with which the White House was wrestling at the time of Axelrod’s remarks this past February were proven to be of the “phony” variety.

The deadly attack on an American consulate in Benghazi, which left four Americans dead including the ambassador to Libya, was never the result of a YouTube video. The emails exposed by the House Select Committee’s investigation into that attack revealed that the State Department was aware of the unspontaneous terroristic nature of that assault on two U.S. intelligence outposts even while it was ongoing. That the White House and its appointees continued to blame that attack on an inflammatory video for almost a week was nothing short of a deliberate deception.

The notion that Obama’s IRS was targeting conservative groups in order to limit their ability to participate in politics remains unresolved. This week, it was revealed that former IRS executive Lois Lerner, who oversaw the awarding of tax-exempt status and who was prepared to prosecute tea party groups in order to compel their silence, also went by the name “Toby Miles.” No, that’s not her burlesque stage name – it would be less controversial if it were. That was allegedly the name Lerner used while conducting IRS business on a personal email account, according to testimony provided to a court by IRS lawyer Geoffrey Klimas. The Lerner emails that investigators were able to recover have uncovered her personal hatred for conservatives that knows few bounds. Lerner went so far as to denounce Abraham Lincoln for redrawing Texas back into the Union. “Citizens United is by far the worst thing that has ever happened to this country,” Lerner wrote. “We are witnessing the end of ‘America.’” We have established both means and motive. What else might they find if all of Lerner’s emails were ever recovered?

Only those who are possessed of the evangelist’s zeal in the pursuit of the elusive “green economy” could fail to see a scandal in this administration’s decision to award millions in federal loans to well-connected clean energy firms. Firms like Sapphire Energy, Abound Solar, and Beacon Power have all at one point or another graced the front pages after bilking taxpayers out of tens of millions and delivering nothing in return (save for lining the pockets of consultants). This week, the Department of Energy’s Inspector General revealed that the most famous of these failures, Solyndra, should never have received a $535 million loan guarantee. The IG found that the Energy Department failed to perform due diligence into the company that was misleading the government about its fundamentals and structuring. The DOE’s Inspector General did not investigate but could not rule out that political pressure from above contributed to the department’s lapse in judgment.

Today, there are a variety of new scandals to add to this mix that should compel Axelrod to revisit his proudest moment. Only days after the former senior White House advisor made his initial remarks, it was revealed that Hillary Clinton had exclusively used a personal “homebrew” email server to conduct national diplomatic affairs. The breadth of the coverage of that scandal and the flagrancy of Clinton’s violation of both State Department and White House guidelines alone renders it “major” by any objective standard. In the effort to whitewash her flagrant disregard for information retention laws, Clinton lied about receiving classified material, about which emails were personal and summarily deleted, about handing over the entirety of her work-related communications to State for review, and about whether she knowingly violated guidelines. Her conduct has been so overtly contemptuous toward the public interest that it may cost her the Democratic Party’s presidential nomination.

And just Tuesday night, a bombshell report in the New York Times indicated that the Pentagon Inspector General’s office had begun an investigation whether intelligence reports were intentionally distorted so as to present an inaccurately rosy picture of the war against ISIS. “The investigation began after at least one civilian Defense Intelligence Agency analyst told the authorities that he had evidence that officials at United States Central Command – the military headquarters overseeing the American bombing campaign and other efforts against the Islamic State – were improperly reworking the conclusions of intelligence assessments prepared for policy makers, including President Obama,” the Times report read. An intentional effort to mislead U.S. officials, and ultimately the public, about the state of affairs in a theater of war is not only the height of irresponsibility; it is a display of criminal disregard for American national security.

If any other administration had presided over these and other scandalous affairs, the press would accurately describe it as “scandal-plagued.” It is true that the president is not personally responsible for much of this conduct. If the Fourth Estate were inclined to treat Obama as they would a Republican, however, the nation would be forced to endure debate over whether the president had fostered an “atmosphere of corruption” that prompted his subordinates to act in such an unruly manner. Barack Obama’s administration may never be labeled an abnormally scandalous one, but the public is watching. They’ll have a chance to vent their frustrations with this administration at the ballot box in 15 months. 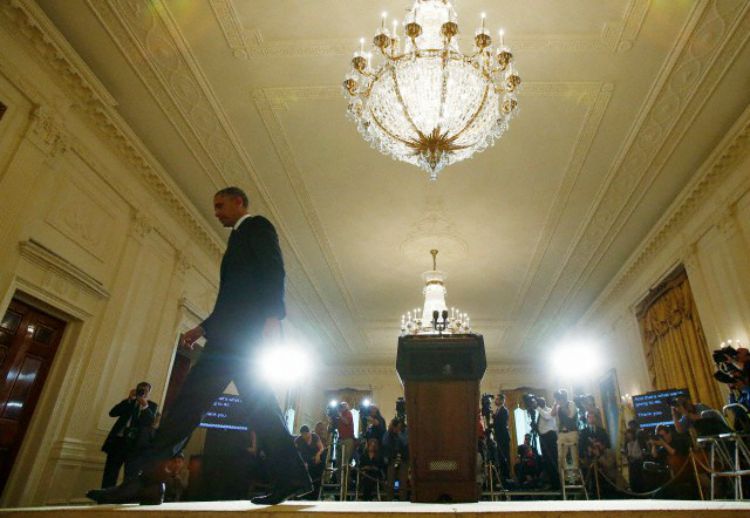