“He often used the phrase ‘Yes we can – si se puede,” averred the opening act for the President of the United States upon his historic personal tour of Havana, Cuba. “We can now say ‘Yes we did.'” If anyone had any residual doubt that the presidential visit to this island nation of recalcitrant communist holdouts was about anything other than Barack Obama, that little indulgence should dispel it.

Obama’s ego-fueled venture to the island prison nation in the Caribbean was tainted by suspect motives on the president’s part from the moment it was announced. The very minute that Obama revealed his intention to unilaterally thaw relations with Cuba, a presidential visit to the throwback socialist state was preordained. But the timing of such a visit was always complicated by Cuba’s hostility. The White House discovered a desperately needed opportunity to save face ahead of a presidential visit when Cuba reluctantly returned to the United States a sophisticated, inert Hellfire missile that had mysteriously found its way to Havana from Europe.

“It is unclear whether a U.S. adversary has ever obtained such knowledge of a Hellfire,” the Wall Street Journal reported at the time. American officials who spoke on condition of anonymity still fear that the technology associated with the advanced, laser-guided, air-to-ground missile that can be fired from helicopter or drone may have been shared with adversarial nations like Russia, China, or even North Korea during its 18 months in Cuban custody. Cuba’s decision to surrender the missile to Washington provided administration officials with a rare chance to heap praise upon Havana and reward their compliance – and to do so before the Cuban government humiliated the administration again.

So, “Where’s the reciprocity?” asked the Miami Herald in an editorial offering the president qualified praise for providing to the Cuban people an example of the superior virtues of representative republican democracy. “A key part of President Obama’s plan to improve relations with Cuba is a relaxation of economic sanctions to foster improved commercial ties,” they answer. The Herald observed that the opening of Cuba to the United States had, so far, looked more like the opening of Cuba to Barack Obama. That’s not altogether fair; American corporate culture is getting a taste, too. The U.S. Treasury has approved a deal that would allow Starwood Hotels and Resorts to become the first American hospitality firm to do business in Cuba in 60 years. There will be many more such deals in the near future.

Those who expect democracy to follow U.S. foreign direct investment in Cuba like mushrooms after a spring rain lack a satisfactory explanation for why similar investment over the decades from Canada and Western Europe has not had that effect. U.S.-based firms and the Castro regime will benefit from the influx of U.S. capital to the Island nation, but the dissident community is unlikely to experience a similar flowering. Indeed, Obama’s decision to legitimize the revolutionary Castro government has yielded only increased domestic oppression.

On the eve of Barack Obama’s meeting with the communist dictator Raul Castro, a Cuba’s U.S. specialist within Havana’s ministry of foreign affairs sounded a hopeful note about the great thaw. “Normal relations means you are ready to respect the other party’s differences and have a peaceful coexistence,” Josefina Vidal Ferreiro told CNN. “Your model isn’t perfect. Ours isn’t. But it’s up to our decisions to make our model more perfect.” From Havana’s perspective, that pursuit of perfection means the stifling of dissent by any means necessary.

On Sunday, the Cuban government conducted a mass arrest of churchgoing government critics in Havana even while the President of the United States was in the air on the way to Havana. The crackdown on dissenters is the clearest signal yet that there will be no opening as a result of Obama’s visit, and confirmation that the White House doesn’t appear to care. Secretary of State John Kerry was scheduled to make a preliminary trip to the island to discuss a possible domestic policy shift regarding Havana’s posture toward government critics, but disputes over precisely who Kerry could meet with scuttled the visit. That this humiliation had no impact on the president’s decision to grace the communist island with his presence says all that anyone needs to know about Obama’s motives.

For those Americans with a naïve attachment to the ideal of the United States as a beacon of freedom and individual liberty, not to mention the notion that American presidents should serve as ambassadors for classical liberalism, Obama’s Cuban adventure is especially disheartening. On Monday, ahead of his historic visit with Castro, Barack Obama appeared in the Plaza de la Revolución where perhaps the most iconic photograph of his Cuban initiative was snapped. There, standing shoulder-to-shoulder with American and Cuban officials, Obama stood solemnly while flanked by a looming monument to the murderous revolutionary Che Guevara. Nothing could so rehabilitate the memory of a ruthless gangster whose image has become the symbol of Cuban oppression.

In service to his own self-image, Barack Obama breathed new life into the moribund and beleaguered phantom legitimacy still enjoyed by the world’s holdout Marxist regimes. Those that have not abandoned socialism in all but symbolism cling to power only through the power of repression. American presidents used to oppose such illegitimacy and tyranny. But, as Barack Obama told the nation when revealing his intention to normalize diplomatic relations with the mobster government in Havana, some believe it is time to “cut loose the shackles of its past.” 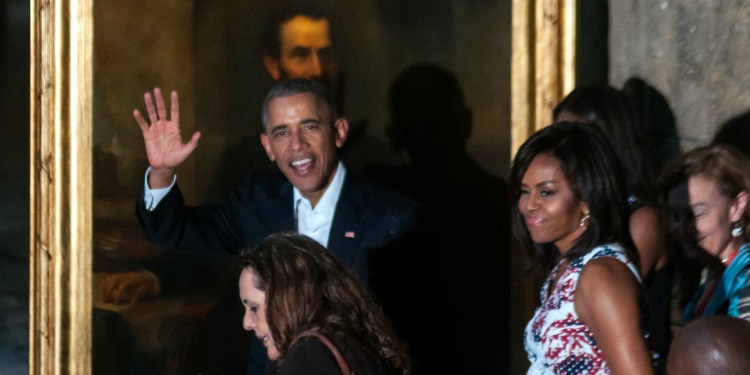