A Case Western Reserve University study defines “projection” as a defense mechanism in which an individual casts what he perceives to be his negative traits onto others. “A more rigorous understanding involves perceiving others as having traits that one inaccurately believes oneself not to have,” the study’s authors wrote. There is no better way to explain the collective unseemly antipathy expressed by the pop-cultural left toward the prayerful in the wake of mass violence.

The latest liberal icon to condemn prayer as the act of heedless people committed to inaction is the TBS news-chat show host Samantha Bee. Her furious remarks on the Orlando massacre received a great deal of praise and attention this week. And why, because Bee reserved her greatest condemnation of this event, in which at least 49 were killed by a radical Islamist who had pledged his loyalty to ISIS, for those who invoke the utility of prayer in response to horror. “The biggest, most helpful thing you can do to ensure this never happens again is [to] sit quietly in a room with your eyes closed, talking to nobody,” Bee said in sarcastic admonition of Florida Governor Rick Scott, who said he and others should pray for his state’s residents as they cope with the worst terror attack on U.S. soil since September 11, 2001. “Stop thinking and do something to improve our society!” By which she meant, stop praying.

This is hardly a unique reaction among liberals to the atrocity of mass violence or terroristic attacks in America. In December, liberals and Democrats chose to attack prayer and faith—not of those fanatical Islamists who, inspired by ISIS, slaughtered 14 in San Bernardino—but of their fellow Americans, predominantly Christians.

Think Progress’ Igor Volsky mounted a crusade against those GOP lawmakers who he insisted offered the survivors of San Bernardino and other victims of gun violence “prayers and little else.” The New York Daily News’ increasingly hysterical front-page editor lashed out at Republicans by highlighting the GOP officeholders who dared to pray for the victims. “God isn’t fixing this,” the paper’s unhinged front page blared. “‘Thoughts and prayers’—particularly from our lawmakers—are simply not enough,” said Senator Chris Murphy. “[O]ur country deserve more than our thoughts and prayers,” Senator Dick Durbin echoed.

This reaction is, to begin with, a prejudicial attack on the faithful founded in ignorance. Those who believe in “the power of prayer” do not think that is a figurative expression. They see the act of prayer as a demonstration of agency and an intervention into events they otherwise cannot control, not a display of helplessness. The secular, urban left, which has little use for God, let alone prayer, imposes its preconceptions on the prayerful without realizing that in doing so they are only exposing themselves as insular and unacquainted with people of faith.

If expressing faith in an omnipotent higher power to effect change and to keep the public safe is condemnable, the left should perhaps be a bit more cautious about whom it chooses to condemn. The prayerful are not merely sitting at home on their knees muttering to themselves; they are actively aiding the Orlando recovery effort. Local churches spent the Sunday after the attack organizing blood drives, producing lines that stretched across blocks and in which donors waited up to three hours. Even the local Chick-Fil-A, dubbed by the fanatical left a hate restaurant because its owners are religious and personally object to same sex-marriage, opened its doors on Sunday. The restaurant decided to contravene its 70-year tradition of closing on that day so that its employees can spend time with their families and “worship if they choose to do so,” in order to provide food donations to emergency workers.

Surely, the motives of Bee and others who berate the prayerful are pure. They seek not merely to mitigate the damage from this atrocity but to prevent the next one. That is a noble impulse, but they decline to debate the merits and efficacy of their preferred solutions (both of which are highly debatable). Instead, they attack others for doing nothing while placing an undue amount of faith in a demonstrably flawed and often ineffectual institution—the federal government. When the prayerful are done praying, they work to effect the change they want to see in the world. By contrast, Bee and her fellow liberals prefer “talking to nobody” from the comfort of a studio. 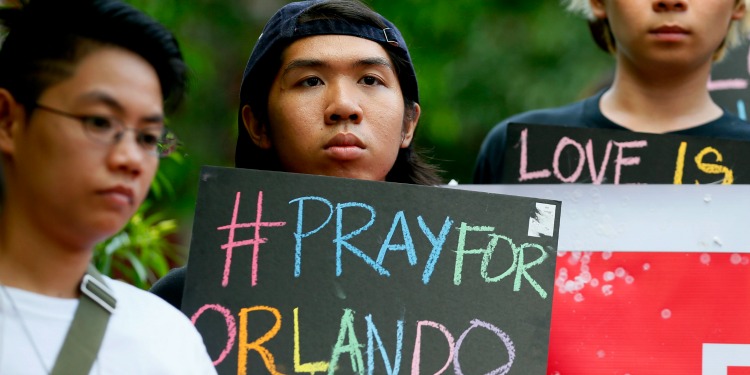