Joe Biden did not gloss over the events that cast an ominous shadow over his inauguration as President of the United States. Precisely two weeks ago today, the once unthinkable—the sacking of the Capitol Building by a mob set on putting an end to the lawful transference of power between competing political factions—was made manifest. President Biden’s inaugural speech did not just make passing note of these sobering circumstances. He clung to them. If there was a theme to his address, it was his insistence that the country must bind the wounds that have transformed the commonplace of partisan politics into the basis for real civil conflict.

“This is our historic moment of crisis and challenge,” the new president averred. “And unity is the path forward.” This is the sort of pablum that more cynical observers would likely dismiss as filler—perfunctory rhetoric that will be dispensed with at the first sign of interparty tension. And these words may yet prove to be hollow. But Biden also identified what he and his speechwriters presumably think are the causes of this “moment of crisis.” And the diagnosis he rendered is a promising one.

“We can see each other not as adversaries, but as neighbors,” Biden proposed. “We can treat each other with dignity and respect. We can join forces, stop the shouting and lower the temperature. For without unity, there is no peace, only bitterness, and fury. No progress, only exhausting outrage. No nation, only a state of chaos.”

More auspicious was the president’s prescription. “Politics doesn’t have to be a raging fire, destroying everything in its path,” Biden proposed. “Every disagreement doesn’t have to be a cause for total war. And we must reject the culture in which facts themselves are manipulated and even manufactured.”

“We must end this uncivil war,” the president concluded. If Biden and his administration are sincere in their desire to see the conflict “that pits red against blue, rural versus urban, rural versus urban, conservative versus liberal” subside, they could do worse than taking Biden’s recommendations to their logical conclusion.

If the “raging fire” of politics is to be doused, politics must be relegated back to its proper place: the conduct of legislative affairs. If “every disagreement” will no longer be “cause for total war,” the stakes of those disagreements must be lowered so that they no longer take on an existential dimension. If we are to “reject the culture in which facts themselves are manipulated,” we must reject a condition in which culture is just another field on which political battles are waged.

In this mission, if it is their mission, Biden enjoys the prospects of success because many of the combatants in the conflict rally beneath his banner. The Trump administration oversaw the politicization of many previously apolitical aspects of the American social compact, but the 45th president didn’t invent this tactic. He merely appropriated a method that had already been perfected by his adversaries.

What we call “politics” today has little to do with the conduct of government. We have incubated a popular culture that has politicized everything. We have politicized entertainment—the choice of programs you watch, and those you don’t, are sources of political identity. The brands you choose to patronize convey your partisan leanings to the world. The clothing you wear (or don’t) is subject to negotiation in the public square. The neighborhoods in which you choose to reside, and the people with whom you surround yourself, have become declarations of partisan affinity.

Tribal affirmations associated with these personal preferences are ruthlessly enforced by a particularly earnest sort of social reformer, most of whom are not associated with the Republican Party. American fashion designers and retailers who market their accouterment as an expression of “deeply held beliefs” do not fall in with the American right. The transformation of your diet into a source of “social identity” was not a conservative project. The GOP did not force professional sports to positively endorse a sort of racial separatism that culminated briefly in the playing of two “national anthems”—one for white Americans and one for black Americans—prior to kickoff.

These are progressive innovations. And they are, no doubt, well-intended. These are seen as methods by which Americans can be educated about and compelled to have sympathy for cultural sensitivities of which they may not be aware. But what seems to the left like inclusivity seems to others like bifurcation—especially those who do not steep themselves in the rapidly evolving standards to which the progressive left holds itself.

In the process of elevating so many aspects of American culture to the realm of the political, we have committed ourselves to a great lie—one at least as psychologically damaging as the the unfounded notion that the 2020 election was marred by fraud. That is the lie that Washington D.C. has some capacity to force the evolution of American culture. It does not. And when the political process fails in a charge for which it was never designed, those who are convinced of the righteousness of their beliefs become equally convinced that the governmental institutions that are unresponsive to their demands are irreparably flawed. But they are functioning as intended—in limited and incremental ways. It is our expectations of them that must change.

This malady isn’t exclusive to the American left, but it is more pronounced among Joe Biden’s nominal allies. If he is genuine in his desire to “stop the shouting and lower the temperature,” he would do well to patiently but firmly remind his side that the conflicts they wage know no end through politics and are, therefore, destined to be resolved in the streets. Without saying it—maybe without even knowing it—that was the promise he made to the nation on January 20. It’s our job now to hold him to it. 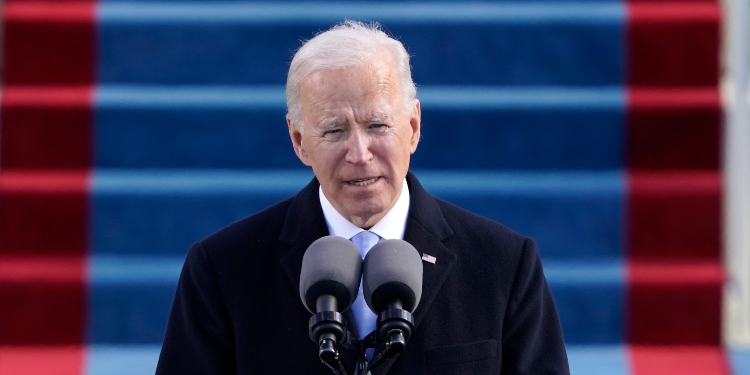