In the months leading up to October, both candidates vying to replace Democratic Virginia Governor Terry McAuliffe had tried unsuccessfully to focus almost exclusively on economic arguments. At 3.7 percent, Virginia’s unemployment rate is simply too good for Republican Ed Gillespie to generate traction by harping on the suboptimal economy. But with just 44 percent of voters approving of the direction in which the state is heading, Democratic Lt. Gov. Ralph Northam couldn’t simply run as if he represented McAuliffe’s second term. Thus, both have succumbed to the interminable allure of divisive, intractable wedge issues.

As the race for governor bent into the home stretch, the underdog—Gillespie, according to the polling—adopted a distinctly Trumpian posture. The wonky former chairman of the George W. Bush-era Republican National Committee has never been a natural populist, and he almost lost the gubernatorial primary to a facsimile of the president whose signature issue was the preservation of monuments to the Confederacy. Gillespie has since found his sea legs and, in pursuit of some concern that would preserve his dubious populist credibility while chipping away at Northam’s support, he settled on crime—specifically, the kind of crime that is committed by illegal immigrant gangs and abetted by the state.

Gillespie has hammered Northam on the issue of MS-13, a frightening but numerically modest El Salvadoran gang, and “sanctuary cities,” municipalities that do not enforce federal immigration laws to preserve local law enforcement’s working relationships in undocumented immigrant communities. Gillespie’s critics have accused him of overstating the relevance of illegal immigrant crime. Even a high-end estimate of MS-13 gang members in northern Virginia is low, and there are no sanctuary cities in the Old Dominion State. But the polls have only been tightening and, on Thursday, Gillespie’s opponent validated his strategy when he pledged to sign a bill banning sanctuary cities if one ever found its way to his desk.

This primal scream of collective angst was camouflaged as political analysis by some who shared the progressive left’s revulsion toward Northam’s concession. Washington Post Data Reporter Christopher Ingraham marveled at how “Democrats have convinced themselves that they need to run as Republicans to win.” CBS News analyst and Slate magazine political correspondent Jamelle Bouie agreed. “[T]he voter worried about sanctuary cities is probably not pulling a lever for Northam anyway,” he wrote. Given the downward trajectory of Northam’s polling (as opposed to Gillespie’s upward momentum), that seems more like an article of faith than analysis.

A Monmouth University poll released on October 17 found that Gillespie maintains a 16-point advantage on Northam on the issue of crime, up from just 8 points in September. What’s more, the issue of crime has resonated in the Western part of the state, where the Republican candidate maintains a commanding lead over Northam. In Western Virginia, the lieutenant governor pulls just 13 percent of the vote. “Painting Northam as soft on crime, especially with the MS-13 gang spots, appears to have been effective,” said Monmouth pollster Patrick Murray. “This is a game of inches right now, so any small advantage counts.”

Unspoken but implied in the progressive activist base’s misery is the belief that voters who are attracted to Gillespie’s anti-gang, pro-monument talk are a lost cause. That kind of resentment of voters likely led Latino Victory Fund to produce a despicable ad featuring a Gillespie-supporting, Confederate flag-flying truck driver aiming to mow down minority children. The impulse to attack voters, not candidates, is a misguided one—no matter how much you might think voters deserve the scolding. The ad was quickly pulled, but the damage was done.

Northam is still the favorite to win next week’s gubernatorial election, but the progressive reaction to this cost-free gesture toward a popular immigration policy bodes ill for the Democratic Party’s post-Trump renovation. If you cherry-pick the polls and ask the question sympathetically, with several sentences of exposition, you can find surveys that show the public is not really so skeptical of sanctuary cities. Maybe they’re even a little favorable toward them! If, however, you ask voters whether they believe law enforcement should enforce the law, the results are unambiguous. Northam gave up nothing with this humble nod toward a sensible policy that has no bearing on Virginia anyway. For the progressive left, even appearing to provide illegal immigration skeptics with rhetorical asylum represented a monstrous betrayal.

That is the fulcrum on which the Democratic Party’s future hinges. The points of friction within the party have much less to do with policy than tone and tactics. Their most fractious intramural disagreements are over how to approach Trump-backing crossover voters, or whether even to try.  For some, that project is unnecessary and may even be corrupting. After all, these are the “deplorables.” Who needs them? Northam’s Democratic Party, the party that wants to be viable again in the Midwest and the South, disagrees. 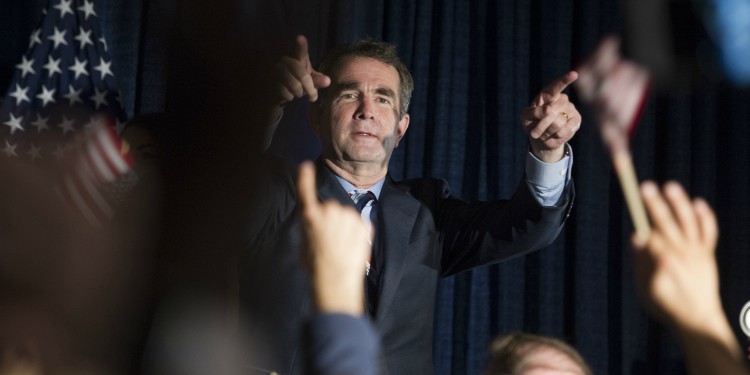