Surrounded as they are by calamity, Americans are probably suffering from crisis fatigue. But there’s another one brewing on the horizon: a crisis of political legitimacy. Our elites and elected officials warn us almost daily that this new nightmare will soon be upon us, and that may become a self-fulfilling prophecy. In their selfish efforts to brand the upcoming election a fraudulent farce, America’s most trusted public officials are attacking the very cornerstones of the national civic compact.

Today, according to a new NBC News/Wall Street Journal poll, just 45 percent of voters believe the 2020 vote will be tallied accurately, a substantial decrease from 2016 when nearly 60 percent said as much. Another 45 percent say they do not believe the election results will legitimately reflect the will of the people, up from 34 percent four years ago. Faithless Republicans vastly outnumber skeptical Democrats (at least, for now), but neither party’s voters are overly confident in the integrity of November’s vote.

We can only conclude that this confidence deficit is what our leaders want. They are, after all, deeply committed to crafting narratives that will absolve them of any blame if their party loses the upcoming contest, even at the expense of the continuity of the American experiment.

It makes some sense that Republicans have become so cynical. The Republican president rarely misses an opportunity to cast doubt on the idea that he could lose legitimately. He’s not even coy about it. “The only way we lose this election is if the election is rigged,” Donald Trump said on Monday.

The president has floated the prospect of delaying the November election until and unless people can “properly, securely and safely” vote—something that will not occur, in his estimation, in states that adopt “universal mail-in voting.” Despite his protestations, the president’s concerns are not prompted by any new, pandemic-related circumstance. He has warned that a fraudulent vote was looming well before the pandemic hit.

Trump has spent his presidency insisting that the margins of victory for Republican candidates in places like Texas and Florida are narrowed as a result of illegitimate practices and that his own election to the presidency was marred by fraud—though only in the states he lost. No investigation, no inquiry, no fact check can disabuse his supporters of this tantalizing victimization narrative.

The president’s Democratic opponents have since gotten in on Trump’s act, and their motives are no less selfish than his.

Joe Biden was among the first to warn that Donald Trump “wants to cut off money for the post office so they cannot deliver mail-in ballots,” effectively compromising the vote. The fact-checkers at FactCheck.org ruled this a “baseless conspiracy” until Donald Trump admitted in no uncertain terms in August that this is precisely what he would like. And yet, Trump’s rhetorical negligence notwithstanding, FactCheck’s original verdict still pertains. As many honest observers have now noted, there is no evidence of a deliberate effort to disrupt the conduct of even this most bizarre election.

The U.S. Post Office is, now and forever, hurtling toward insolvency, but the institution insists it has “sufficient liquidity to continue operating through at least August 2021.” Service delays and non-deliveries have long plagued this operation and were exacerbated by this year’s coronavirus outbreak, but they predate the appointment of Postmaster General Louis DeJoy to his position (which he assumed after USPS’s bipartisan board of governors recommended his appointment). Viral images posted to social media featuring shuttered post boxes and mail trucks on flatbeds being whisked off to some undisclosed location imply some nefarious conspiracy is afoot. But this, too, is standard operating procedure. The Post Office has the capacity to process hundreds of million pieces of mail per day—far more than the largest number of votes ever cast in any general election.

The overcaffeinated liberal commentariat has long advanced the notion that the president is undermining the Postal Service for personal political gain, but the Democratic Party’s elected officials have also recently attached themselves to this idea. Democratic Caucus Chairman Hakeem Jeffries wrote a letter to the FBI arguing that DeJoy should face a criminal investigation. Speaker Nancy Pelosi insisted that Trump is waging a “campaign to sabotage the election by manipulating the Postal Service to disenfranchise voters.” Even former President Barack Obama has claimed that Trump is nakedly seeking to “kneecap” and “starve” the USPS.

These allegations are unsubstantiated. And yet, just as the notion that Donald Trump was the beneficiary of illicit Russian aid in 2016, they will exert a powerful hold over the liberal imagination and justify—if he is reelected—the baseless claim among Democrats that their party’s rightful victory in the 2020 election was stolen from them.

The stewards of American democracy appear to see some short-term advantages in these attacks on the public’s trust. Why accept a loss when you can indict the institutions that dealt out your defeat? That dangerous temptation has always been there, but it was ignored or renounced by more responsible generations. The current crop of prominent elected officials is not bound by such scruples.

Indeed, the ambitious among us are increasingly prone to advance their own prospects by crafting self-serving fantasies about the country’s illegitimacy. Federal agents, for example, are not said to be protecting federal property, operating within strictly defined legal parameters. Rather, they’re “stormtroopers” “kidnapping” people off the streets. And this is not riotous violence; they’re examples of peaceful protests or “unrest in the streets”—a good and noble endeavor “as long as there’s unrest in our lives.” We’re not witnessing a constitutionally prescribed check on the executive branch by Congress; we’re seeing an unlawful “coup.”

These are the words of the nation’s most eminent constitutional custodians. They are busily sacrificing the most precious and wonderful aspects of our civic traditions, the peaceful and legitimate transfer of power from one faction to another, in pursuit of a storyline that preserves their own egos in the event of a loss. We seem to no longer have a leadership class that believes in the value of the American system if they’re not at its helm. Civic propriety is no longer inviolable—it is conditional, and that condition is their own hands on the levers of power. The sorry, sordid recklessness of such conduct is unforgivable, and its consequences may be terribly profound. 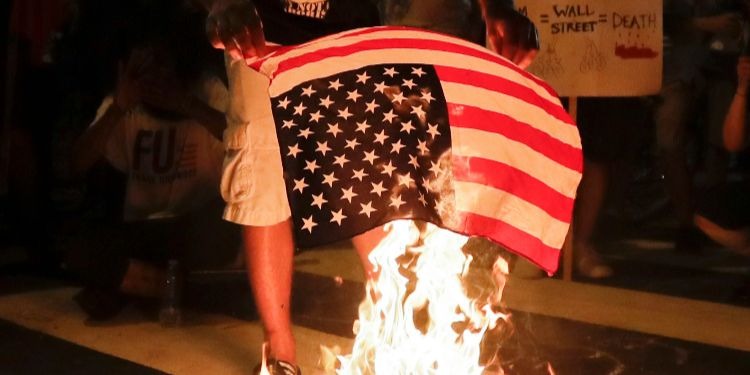